Gay activists in Honduras are facing torture, prison and assassination. In this report from the latest Index on Censorship magazine, Duncan Tucker reports on the largely uninvestigated killings that are slipping under the radar of the rest of the world

[This article is also available in Spanish]

A year after returning from exile, Honduran gay rights activist Donny Reyes still fears a murderous attack at any minute.

“I’ve been imprisoned on many occasions. I’ve suffered torture and sexual violence because of my activism, and I’ve survived many assassination attempts,” he said, in an interview with Index on Censorship.

Activists in Honduras must contend with a constant barrage of threats and, often fatal, attacks. Reyes, the coordinator of the Honduran lesbian, gay, bisexual, and transgender advocacy group Arcoíris (Rainbow), had spent 10 months abroad for his own safety, but felt an obligation to return to the frontline of the fight against discrimination.

“To be able to continue with my personal life and my work I have to be conscious that [death] could come at any moment,” he said. “The truth is it doesn’t worry me anymore. What worries me is that things won’t change.”

Dozens of LGBT Hondurans are murdered each year, with few of the killers brought to justice, according to figures from respected Honduran NGO Cattrachas. Journalists and activists who speak out are often attacked. One of these was Juan Carlos Cruz Andara who died after being stabbed 25 times by unknown assailants last June.

Arcoíris reported 15 security incidents against its members during the second half of 2015, including surveillance, harassment, arbitrary detentions, assaults, robberies, theft, threats, sexual assault and even murder. Other LGBT activists have experienced forced evictions, fraudulent charges, defamation, enforced disappearances and restrictions of right to assembly.

The activists consulted by Index all said that the level of homophobic violence exploded after the ousting of liberal President Manuel Zelaya in the military coup of 2009. The election of right-wing candidate Porfirio Lobo Sosa the following year coincided with the militarisation of Honduras, a rise in gang-related violence, and a clampdown on human rights.

The records from Cattrachas show that on average two LGBT people were murdered each year in the country from 1994 to 2008. After the 2009 coup that rate rocketed to an average 31 murders per year, according to figures from Arcoíris. In early 2016 there were signs the situation was escalating further with the murder of Paola Barraza, a member of Arcoiris’s group, on 24 January. In reality though it is impossible to know precisely how many people have been killed because of their sexuality because the vast majority of cases remain unsolved.

Erick Martínez Salgado, who volunteers with LGBT advocacy group Kukulcanhn, told Index that gay activists protested heavily against discrimination and the coup. He believes the government came to view his group as a threat to the traditional social order and started targeting them to “send a message” to other protesters.

One of the most prominent gay rights activists of the time, Walter Tróchez, was killed in a drive-by shooting in December 2009. Human rights groups noted that he had previously been kidnapped, beaten and threatened for demonstrating against the coup and advocating for gay rights. Four years later, Tróchez’s friend and fellow gay rights activist Germán Mendoza was arrested and charged with his murder.

Mendoza told Index he was held in deplorable conditions and repeatedly tortured in a bid to make him plead guilty. Eventually he was released after proving his innocence last year. Mendoza believes he was arrested because the government wanted to use him “as a scapegoat to wash their hands of the responsibility” for Tróchez’s death, which remains unsolved. The Honduran government did not respond to requests for comment.

Gang warfare was a massive contributor to Honduras status as the nation with the world’s highest murder rate in 2012, however the gay community’s main concern is not gangs, but the state security forces.

“The police constitute the primary perpetrator of violations of the rights of the LGBT community,” the Coalition Against Impunity, an alliance of 29 Honduran NGOs, warned last year, citing alleged “police policy of frequent threats, arbitrary arrests, harassment, sexual abuse, discrimination, torture and cruel or degrading treatment”.

As a result many vulnerable activists are reluctant to ask for protection, for fear that contact with the police would expose them to greater security risks or reprisals.

The journalists who document homophobic violence in Honduras also risk their lives. Dina Meza, an independent investigative reporter who has covered the issue extensively, was nominated for an Index on Censorship Freedom of Expression Award in 2014 for her journalism. Meza said the country’s mainstream media often portrays the LGBT community in a negative light.

Meza, who launched the independent news site Pasos de Animal Grande last year to draw attention to the hardships facing the most vulnerable sectors of society, said reporters who cover violence against the LGBT community are also targeted. She said not only do journalists get physically assaul-ted by the security forces and expelled from public events, but they are also targets of government-led smear campaigns.

“It’s extremely common here for them to link human rights defenders to drug trafficking and organised crime, in a bid to sow doubts in people’s minds about the work that we’re doing,” she explained. “If we speak out at an international level they say we’re trying to undermine Honduras, discourage investment and see the country burn.”

Peter Tatchell, director of the London-based LGBT campaigning group the Peter Tatchell Foundation, called for the world to pay more attention to the killings. He said: “This extensive, shocking mob violence against LGBT Hondurans is almost unreported in the rest of the world. The big international LGBT organisations tend to focus on better-known homophobic repression in countries like Egypt, Russia, Iran and Uganda. What’s happening in Honduras is many times worse. Is this neglect because it is a tiny country with few resources and no geo-political weight? The UN, Organisation of American States and foreign aid providers need to do more to press the Honduran government to crackdown on anti-LGBT hate crime and to educate the public on LGBT issues to combat prejudice.”

Meza and the activists interviewed by Index also believe that Catholic and Evangelical Christian groups have become increasingly influential in Honduran society. Reyes from Arcoíris described the state, the church and the mainstream media as a triumvirate which has fuelled “impunity, fundamentalism, machismo and misogyny” across the country, with disastrous consequences for the LGBT community.

“At home and at school are the first two places where we’re attacked and discriminated. We flee home at very young ages because the family is built on religious values. Our families punish us in a cruel manner and this has a terrible psychological impact,” Reyes said. “Our educational and employment opportunities are diminished every day. We can be sex workers or street vendors, or stay in the closet in the hope of getting a job, but if they find out about your sexual orientation you’ll almost certainly be fired.”

Despite the risks he and his fellow activists face, Reyes said the drastic need for change is what gives them the strength to keep fighting discrimination: “We need a Honduras that’s free from violence and homophobia. We believe it’s our responsibility to fight for this so the next generation have a space to live in a better world.” 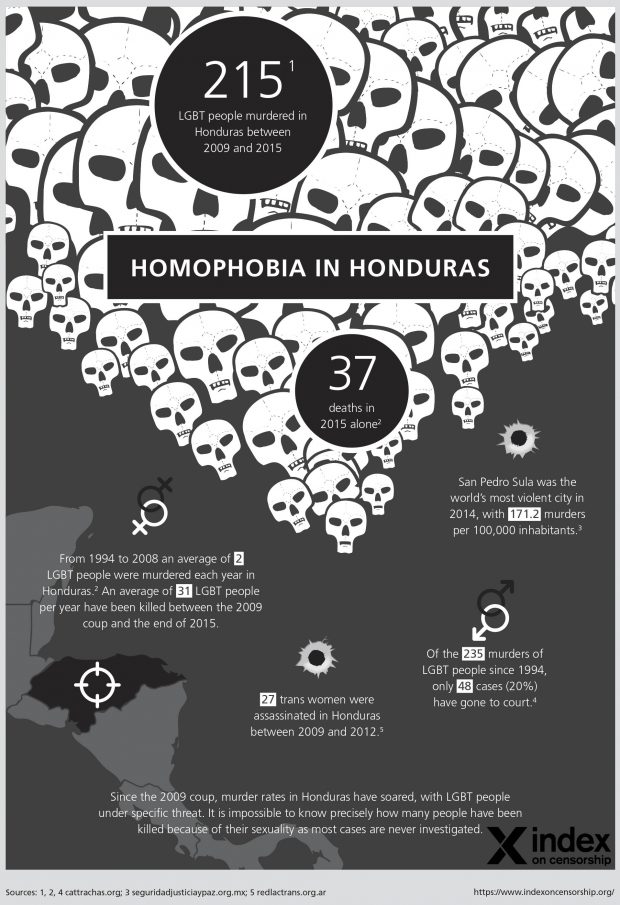 This article is from the latest issue of Index on Censorship magazine. Order your copy here, or take out a digital subscription via Exact Editions (free trial or £18 for the year). Copies are also available at the BFI and Serpentine Gallery (London), News from Nowhere (Liverpool), Home (Manchester) and on Amazon. Each magazine sale helps Index on Censorship fight for free expression worldwide.

Duncan Tucker
Duncan Tucker is a journalist based in Mexico who writes regularly for Index on Censorship magazine.
Latest posts by Duncan Tucker (see all)