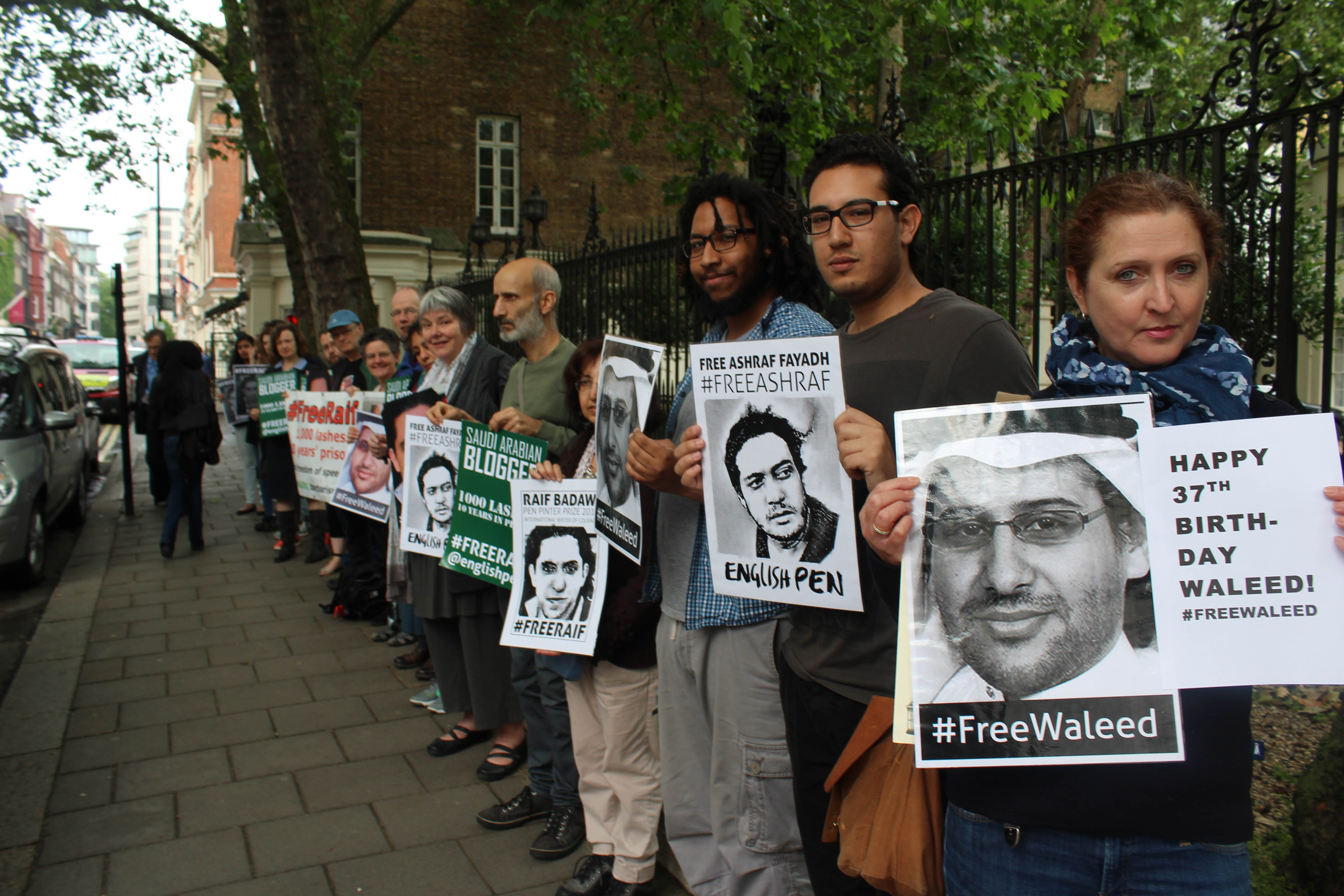 Index on Censorship joined English Pen and several other organisations on Friday outside the Saudi Arabian embassy in London to call for the immediate release of Raif Badawi. The Saudi blogger was arrested four years ago on 17 June 2012. He was subsequently sentenced to 10 years in prison and 1,000 lashes for creating the website Free Saudi Liberals and “insulting Islam through electronic channels”.

Badawi received his first 50 lashes in the port city of Jeddah on Friday 9 January, after which the world took notice. The attention has been invaluable in delaying the remainder of his lashing, which his wife Ensaf Haidar says he won’t be able to survive.

Ahead of the demonstration, English Pen and the Raif Badawi Foundation for Freedom have been asking his supporters around the world to take action, including sharing a photo of themselves holding a poster of Raif or a message of solidarity.

It is crucial that we continue to take a stand against the Saudi government’s treatment of Raif Badawi. Index spoke with several of the protesters in London. 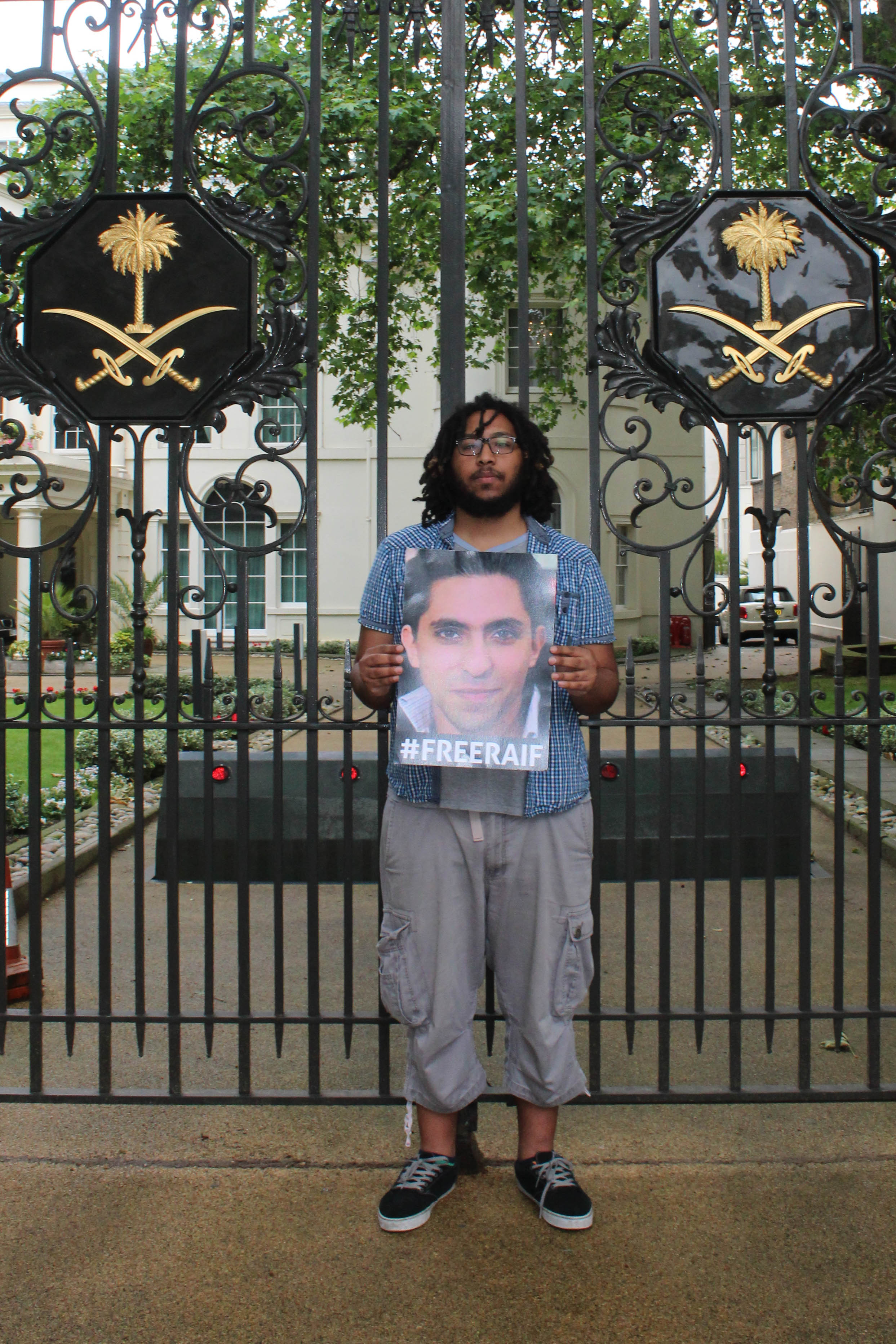 Imad Iddine Habib, spokesperson of the Council of Ex-Muslims of Britain

“I come from Western Sahara and I’m here today because I knew Raif Badawi through his writings, have been to his websites and I know his family. This campaign is very close to my heart. Raif is in prison for writing and offering a space for a lot of Saudis that don’t fall in line with the thinking of the regime and the conservatives. I would hope to see more and more people stepping up to call out Saudi Arabia and the oppressive and anti-human rights laws they are implementing. Increasingly these laws are used against atheists and free thinkers, who are being judged as terrorists.” 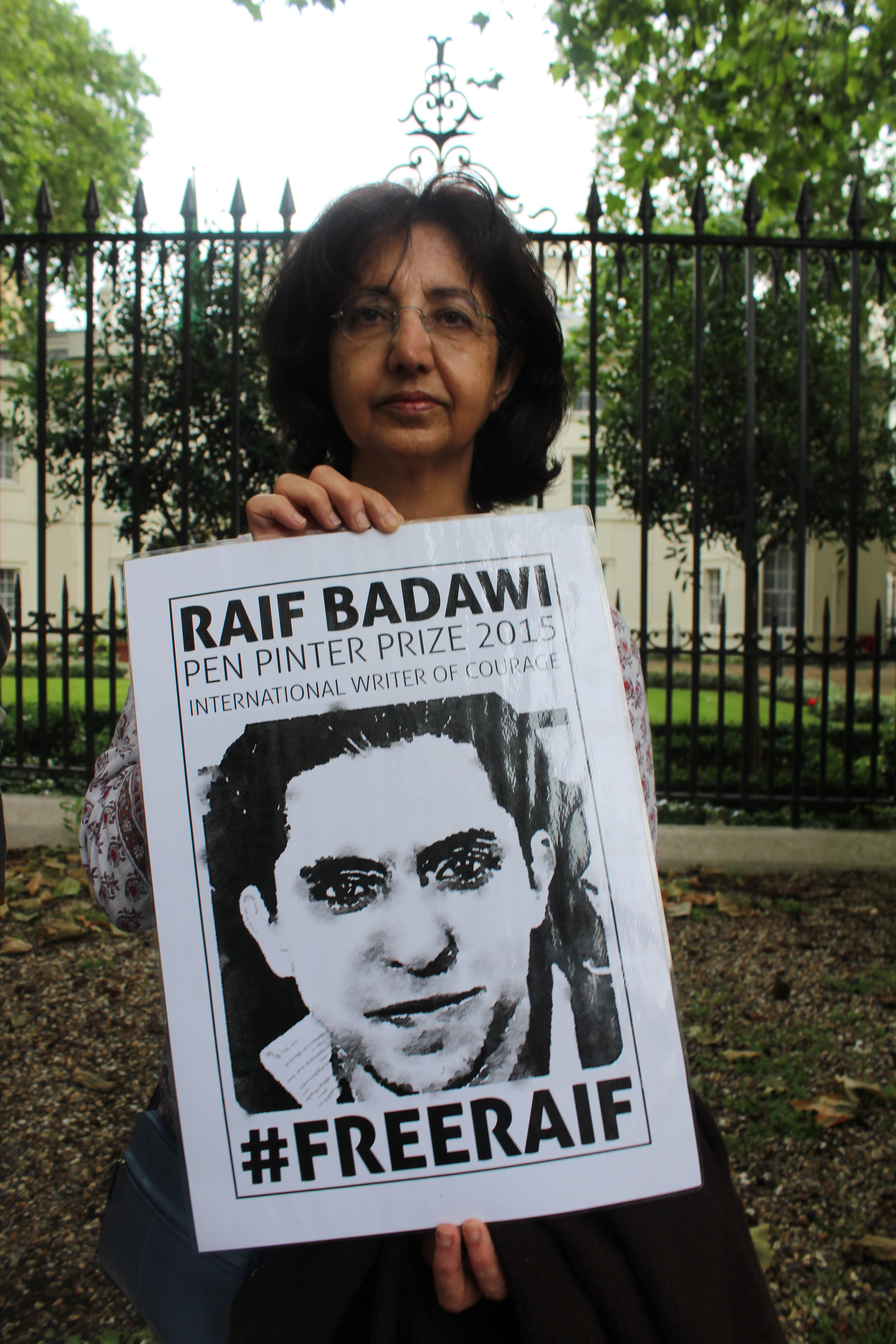 “As a writer, I feel that freedom of expression is the most important freedom that humanity has. In all societies, dialogue and discourse are the manners in which we examine ourselves and move forward. Raif was doing precisely that. He was encouraging dialogue and debate which was peaceful and non-harmful, and his punishment is unjustified and barbaric. Raif is a great person for speaking out regardless of the consequences. I’m here to support his cause and the cause of many other writers who are imprisoned. I’m here as a writer in solidarity with another writer.” 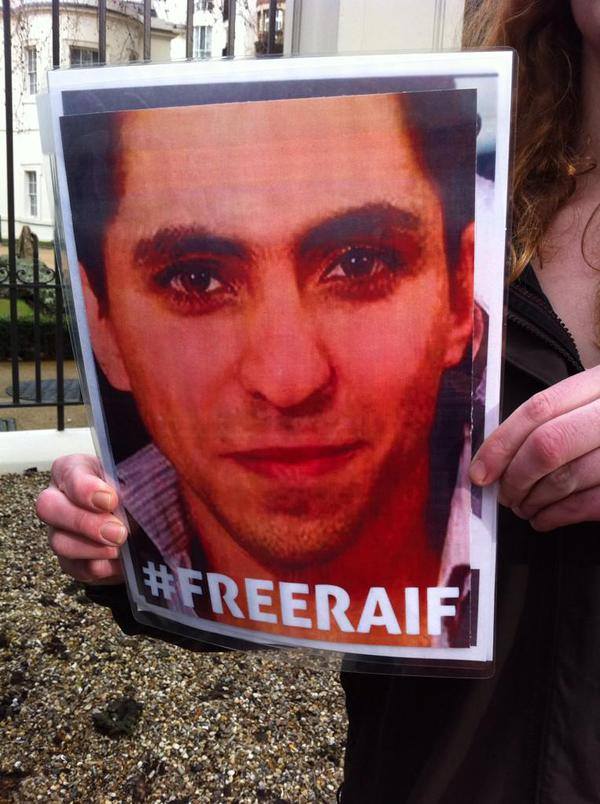 “Unfortunately, here we are outside the Saudi embassy – again. We’ve been coming here for 18 months in support of imprisoned blogger Raif Badawi, firstly with 20 consecutive weekly protests following his lashing, and now we protest here monthly. Today not only marks the fourth anniversary of Raif’s arrest but his lawyer Waleed Abulkhair’s 37th birthday. Waleed is serving a 15-year sentence. We are here to continue to call on the authorities to release them both, which is now more important than ever as we have learned this week that both have been hospitalised following a hunger strike. We know these protests are a really big deal for them.” 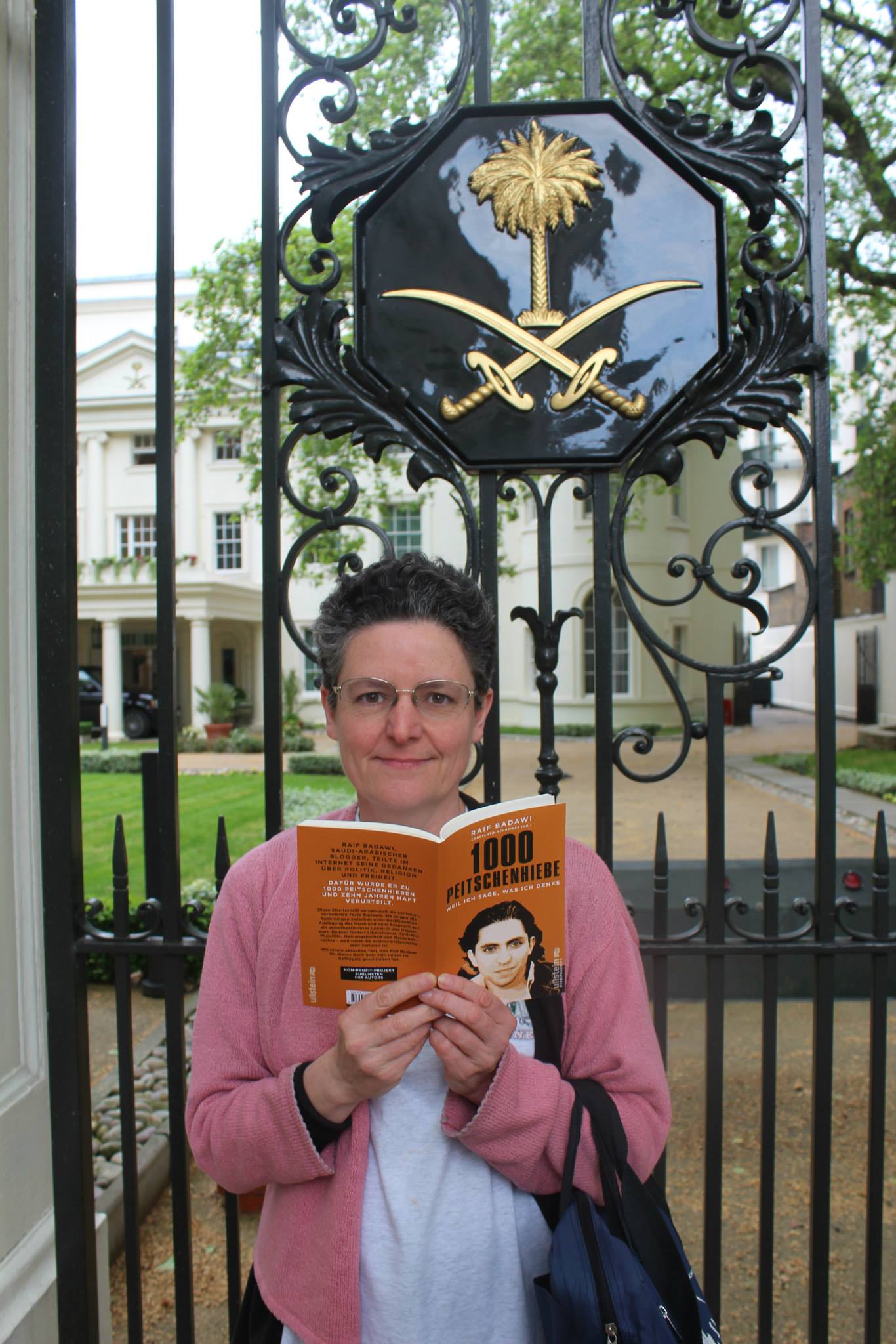 “I come here quite frequently — I’m one of the regulars. It’s very important to stand up for freedom of expression and Raif symbolises thousands of people across the world who suffers persecution as a result of expressing a peaceful opinion. He’s a victim of religious-led persecution and anyone who believes in free speech should support him.” 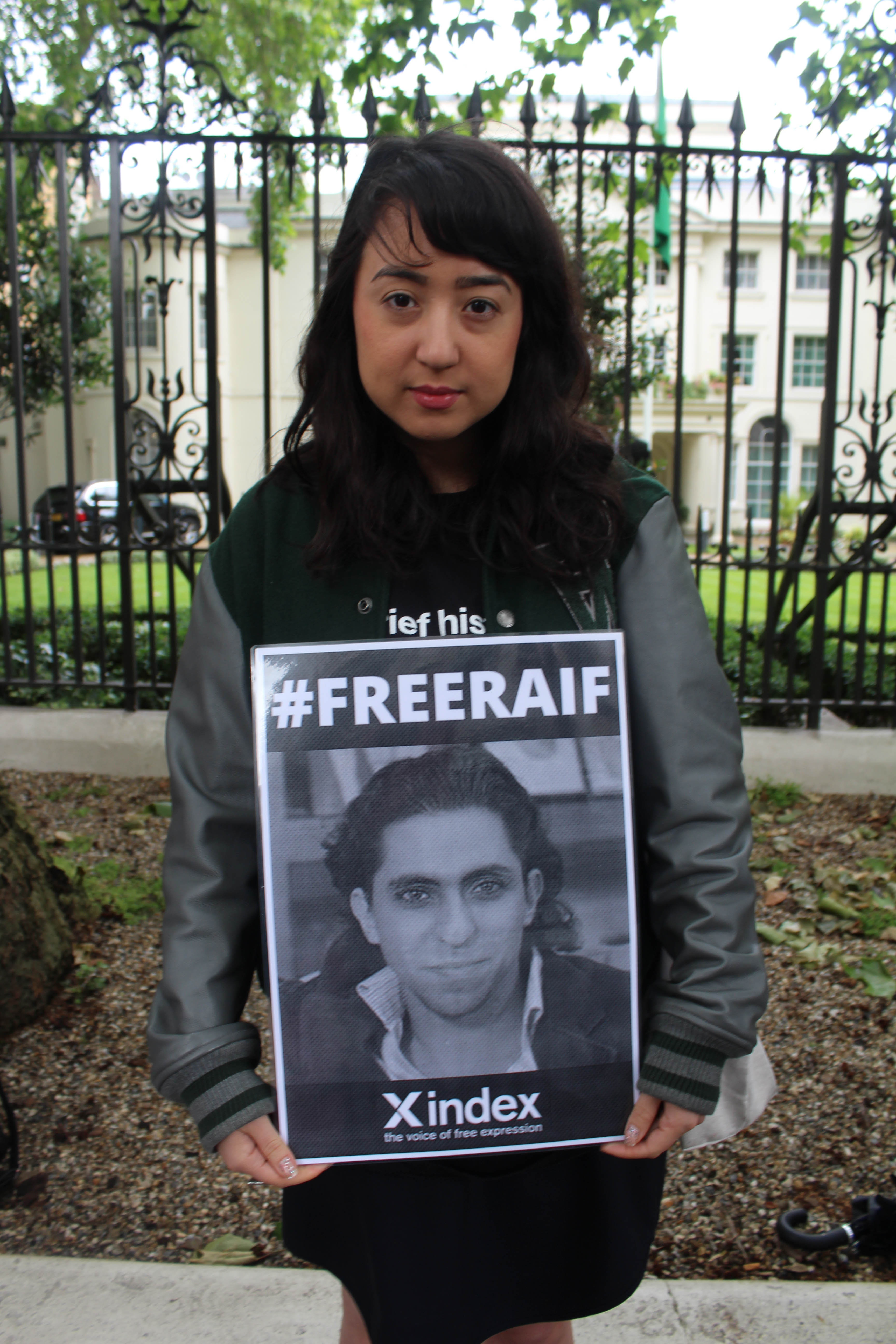 “We are here in solidarity with Raif. Index on Censorship is particularly concerned with his public lashings, the second set of which has been delayed due to his health problems. If the Saudi government conducts the rest of his lashings in private, as they said they will, there are much more opportunities for abuse. He may not survive and this is why we must not turn a blind eye.”