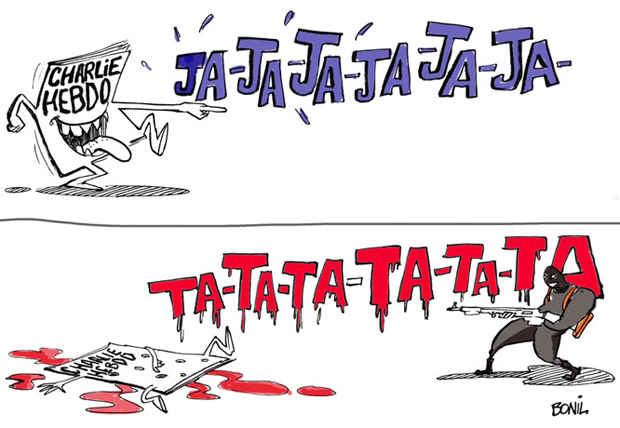 On 7 January 2015, two gunmen entered the Paris offices of Charlie Hebdo and murdered 12 people, including most of the senior editorial staff. The attack was in reprisal for the satirical magazine’s publishing of cartoons of the prophet Mohammed.

In defiance of this affront to free speech, the front cover of the “survivor’s edition” of Charlie Hebdo – which sold 3 million copies in 25 countries – depicted Mohammed crying and holding a Je Suis Charlie placard with the headline: Tout est pardonné (All is forgiven).

Two years on from the attack, we have compiled a reading list of articles published by Index on Censorship about Charlie Hebdo, including not just the 2015 attack but the 2011 firebombing of the publication’s previous office on the day a “sharia” edition was to hit news stands.

One year on from Charlie Hebdo, dissenting voices must be protected

On the anniversary of the brutal attack on the offices of Charlie Hebdo Index joined others in reaffirming our commitment to the defence of the right to freedom of expression.

After Charlie Hebdo: The free speech fight begins at home

Threats against freedom of expression come in all shapes and sizes. We need to stand up to the bullies together.

Freedom of expression is non-negotiable

Index on Censorship condemnsed this appalling attack on the satirical magazine Charlie Hebdo, and any attempt to silence a free press.

How cartoonists responded to the attack on Charlie Hebdo

People around the world show solidarity with the French satirical magazine.

Index on Censorship, the Comic Book Legal Defense Fund, freeDimensional, Pen America, FreeWord, Reporters Without Borders, Article 19 and English PEN called on all those who believe in the fundamental right to freedom of expression to join in publishing the cartoons or covers of Charlie Hebdo on 8 January 2015. We believe that only through solidarity – in showing that we truly defend all those who exercise their right to speak freely – can we defeat those who would use violence to silence free speech.

You can’t kill an idea by killing people. The sickening attack on Charlie Hebdo has shown that to be true. As France mourns her dead, millions around the world are discovering the work of her bravest satirists. Nous sommes Charlie.

Playwright and poet Meltem Arikan penned a poem reflecting on the Charlie Hebdo attack. How can thoughts be free?

Cartoonists were among the most visual in their reaction to the attack on French satirical magazine Charlie Hebdo. Musa Kart and Xavier Bonilla, who have both been targeted by their governments, shared their thoughts.

Jodie Ginsberg: “I believe in free expression, but…”

The decision by six authors to withdraw from a Pen American Centre gala in which Charlie Hebdo was honoured with an award once again emphasised the dangerous notion that some forms of free expression are more worthy than others.

When the Charlie Hebdo killings happened in Paris in early 2015, attention swivelled to the way that terror and accusation are being used to try and stifle debate. But these are discussions that are not only being held in France, so I asked writers around the world to write short essays exploring the ways that journalists and artists have been threatened over the years, for exploring themes that others would rather they had not tackled.

France, Charlie Hebdo and the meaning of Mohammed

The office of French satirical Magazine Charlie Hebdo was firebombed as a result of its decision to publish a front cover satirising Mohammed. Here, Sara Yasin and Myriam Francois-Cerrah discuss the background and motivations behind the attack, and ask why some Muslims feel entitled to answer offence with violence.

The smoke had barely cleared from the burned-out office of Charlie Hebdo magazine back in 2011 when Time magazine’s Bruce Crumley chose to criticise the satirists over the terrorists. James Kirchick denounces this all-too-familiar tendency.

In the months following the 2015 attack on Charlie Hebdo, a graphic novel exploring challenges to press freedom across Europe and the impact of limitations on journalists was released by the European Youth Press.