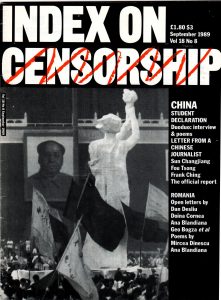 Index has covered censorship in China since 1973. While the government’s approach has evolved in today’s digital era, in the aftermath of the Tiananmen Square massacre of 1989, key themes surrounding the suppression of political dissent and free expression remain as pressing as ever. Explore them in this reading list featuring prominent Chinese academics, activists and writers.

Wang Dan, a leading figure in the 1989 protests, talks to the writer Xinran about the fallout and the legacy of Tiananmen. Wang Dan was released from prison in 1998 and exiled to the United States. He completed his PhD at Harvard University. He is chairman of the Chinese Constitutional Reform Association and on the advisory board of Wikileaks. Xinran worked as a journalist and radio presenter in China. She now lives in London. Her books include The Good Women of China (Vintage), Sky Burial (Vintage) and China Witness (Chatto & Windus).

Student leaders Liu Xiaobo, Zhou Duo, Hou Dejian and Gao Xin declared a hunger strike in Tiananmen Square just before the massacre on the night of 3-4 June 1989. This translation of excerpts of the declaration was first published in The Independent, 10 June 1989.

From Coming back to life: written for the ‘Tiananmen mother’

This poem was written by Chinese poet Shi Tao who has faced censorship, government threats and imprisonment for his work. It was translated by English scholar Frances Wood.

A date (not) to forget: The author on why her book about Tiananmen would be well-nigh impossible to research today

China has passed a law to make telling the wrong sort of history punishable. Louisa Lim, author of a book on the Tiananmen Square massacre, says she wouldn’t be able to research her book today.

In 1999, the 10th anniversary of the Tiananmen massacre passed quietly enough but as British journalist John Gittings writes, the desire for change and for democracy in China is as strong as ever.

One of China’s leading young poets Li Shizheng, known as DuoDuo, was in Tiananmen Square on the day of the massacre. He flew to Britain the day afterwards, where he was interviewed by Gregory Lee for Index.

Subscribe to the print edition Index on Censorship magazine here for £35 or take out a digital subscription via Exact Editions (just £18 for the year, with a free trial).