AWARDS
Habari RDC: "We must do everything possible so that Congolese society becomes more democratic"
08 Apr 2019
BY EMILY SEYMOUR

In December 2018, when Index on Censorship last spoke to Habari RDC, the 2018 Index on Censorship Freedom of Expression Award Fellow for Digital Activism, the Democratic Republic of Congo was gearing up for an election that would name a successor to president Joseph Kabila, who had been in power since 2001.

The election, which took place on 30 December 2018, led to much confusion over who has won and the Regulator of Media for Congo forbid the press from publishing provisional results of the election. However, exit polls inevitably began circulating following the vote, causing various candidates and their supporters to claim the win.

“Alliances between political parties are in the process of being reorganised and we do not really know who the opposition is and who is in power,” Guy Muyembe, president of Habari RDC, told Index. “We will probably have until the end of the year to know the identity of each other.”

On the day after the election, authorities in Congo shut down the internet and disrupted SMS services under the guise of tackling fake news. Social media companies were blocked, and Habari RDC’s internet service provider, DHI Telecom, made clear that they had cut Habaris’ connection because their content was deemed to be dangerous.

The shutdown ended on 19 January 2019 and cost the country and its people millions of dollars in revenue.

Although Habari, like many in the Congo, was greatly impacted by the internet shutdown, they had measures in place to ensure they could operate in some capacity. “We have always made sure that our work is not 100% dependent on the internet connection. There are several offline activities where young people from lower-income neighbourhoods take part,” Muyembe said.

When elections are surrounded by doubt, it can be difficult to sift through all of the information and find the facts. Habari makes it a priority to always ensure what they publish is relevant and true.

“We avoid jumping on everything that is published here and there on social networks. Our luck is that we are not a news media outlet,” said Muyembe. “So we take our time to analyse and verify that the information in our possession is accurate.”

“Reports from various organisations show that more than half of the population is under 30 years of age. So we have to consider them if we want development tomorrow,” said Muyembe.

This year is a busy one for Habari as they work to ensure that youth issues and concerns are both heard and addressed by policymakers in the DRC.

“Habari will organise two programmes each year in partnership with organisations like the I’Institut Français: Facing young people — a moment of exchange between the authorities and young people on issues of general interest; and CaféBlog — a workshop of exchange and training on issues related to the use of the internet and social networks,” said Habari.

As for the future of the Congo, despite a rocky beginning to the year, Habari is hopeful that change is taking place, which will allow for greater freedom of expression in the future.

Muyembe points out that there are things being done now that were not seen during Kabila’s time as president or pre-Kabila. For example, the public radio and television channels now occasionally broadcast activities of those who are not favourable to those in power.

“We must do everything possible so that Congolese society becomes more democratic and allows several contradictory voices to express themselves,” said Muyembe.

Habari has benefited greatly from their position as Index fellows, Muyembe added, as they’ve grown from a locally known organisation to an internationally recognised organisation. They will work with Protection International for a training session in order to help improve the security issues for their bloggers.

As a result of Habari RDC working with Index, “it was easier for it to fit into the landscape of Congolese organisations both in the youth sector and online media. Secondly, it allowed us to network with organisations from other countries to meet future challenges,” said Muyembe. 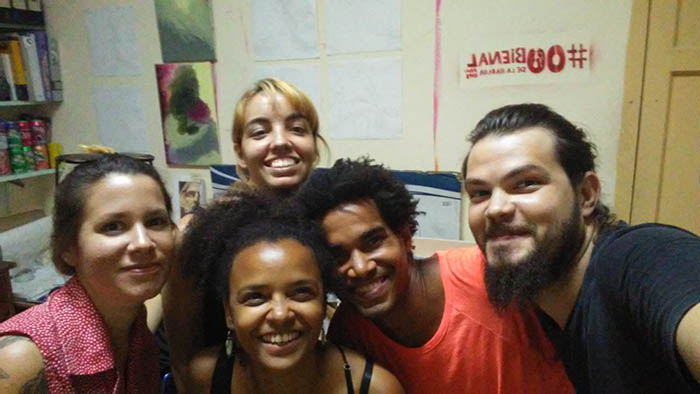 Museum of Dissidence: “We want to rebuild Cuba but change will not be easy”

The Museum of Dissidence, which won the Index Freedom of Expression Awards Fellowship for Arts, is supporting a new generation of artists in Cuba to challenge the status quo