Index editor Rachael Jolley argues in the summer 2019 issue of Index on Censorship magazine that it is vital to defend the distance between a nation’s leaders and its judges and lawyers, but this gap being narrowed around the world 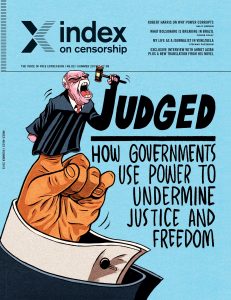 It all started with a conversation I had with a couple of journalists working in tough countries. We were talking about what kind of protection they still had, despite laws that could be used to crack down on their kind of journalism – journalism that is critical of governments.

They said: “When the independence of the justice system is gone then that is it. It’s all over.”

And they felt that while there were still lawyers prepared to stand with them to defend cases, and judges who were not in the pay of – or bowed by – government pressure, there was still hope. Belief in the rule of law, and its wire-like strength, really mattered.

These are people who keep on writing tough stories that could get them in trouble with the people in power when all around them are telling them it might be safer if they were to shut up.

This sliver of optimism means a great deal to journalists, activists, opposition politicians and artists who work in countries where the climate is very strongly in favour of silence. It means they feel like someone else is still there for them.

I started talking to journalists, writers and activists in other places around the world, and I realised that although many of them hadn’t articulated this thought, when I mentioned it they said: “Yes, yes, that’s right. That makes a real difference to us.”

So why – and how – do we defend the system of legal independence and make more people aware of its value? It’s not something you hear being discussed in the local bar or café, after all.

Right now, we need to make a wider public argument about why we all need to stand up for the right to an independent justice system.

On an ordinary day, most of us are not in court or fighting a legal action, so it is only when we do, or we know someone who is, that we might realise that something important has been eroded

We need to do it because it is at the heart of any free country, protecting our freedom to speak, think, debate, paint, draw and put on plays that produce unexpected and challenging thoughts. The wider public is not thinking “hey, yes, I worry that the courts are run down, and that criminal lawyers are in short supply”, or “If I took a case to trial and won my case I can no longer claim my lawyer’s fees back from the court”. On an ordinary day, most of us are not in court or fighting a legal action, so it is only when we are, or when we know someone who is, that we might realise that something important has been eroded.

Our rights are slowly, piece by piece, being undermined when our ability to access courts is severely limited, when judges feel too close to presidents or prime ministers, and when lawyers get locked up for taking a case that a national government would rather was not heard.

All those things are happening in parts of the world right now.

In China, hundreds of lawyers are in prison; in England and Wales since 2014 it has become more risky financially for most ordinary people to take a case to court as those who win a case no longer have their court fees paid automatically; and in Brazil the new president, Jair Bolsonaro, has just appointed a judge who was very much part of his election campaign to a newly invented super-ministerial role.

Helpfully, there are some factors that are deeply embedded in many countries’ legal histories and cultures that make it more difficult for authoritarian leaders to close the necessary space between the government and the justice system.

Many people who go into law, particularly human-rights law, do so with a vision of helping those who are fighting the system and have few powerful friends. Others hate being pressurised. And in many countries there are elements of the legal system that give sustenance to those who defend the independence of the judiciary as a vital principle.

Nelson Mandela’s lawyer, Sir Sydney Kentridge QC, has made the point that judges recruited from an independent bar would never entirely lose their independence, even when the system pressurised them to do so.

He pointed out that South African lawyers who had defended black men accused of murder in front of all-white juries during the apartheid period were not easily going to lose their commitment to stand up against the powerful.

Sir Sydney did, however, also argue that “in the absence of an entrenched bill of rights, the judiciary is a poor bulwark against a determined and immoderate government” in a lecture printed in Free Country, a book of his speeches.

So it turned out that this was the right time to think about a special report on this theme of the value of independent justice, because in lots of countries this independence is under bombardment.

It’s not that judges and lawyers haven’t always come under pressure. In his book The Rule of Law, Lord Bingham, a former lord chief justice of England and Wales, mentions a relevant historical example. When Earl Warren, the US chief justice, was sitting on the now famous Brown v Board of Education case in 1954, he was invited to dinner with President Dwight Eisenhower. Eisenhower sat next to him at dinner and the lawyer for the segregationists sat on his other side. According to Warren, the president went to great lengths to promote the case for the segregationists, and to say what a great man their lawyer was. Despite this, Warren went on to give the important judgement in favour of Brown that meant that racial segregation in public schools became illegal.

Those in power have always tried to influence judges to lean the way they would prefer, but they should not have weapons to punish those who don’t do so.

In China, hundreds of lawyers who stood up to defend human-rights cases have been charged with the crime of “subverting state power” and imprisoned. When the wife of one of the lawyers calls on others to support her husband, her cries go largely unheard because people are worried about the consequences.

This, as Karoline Kan writes on p23, is a country where the Chinese Communist Party has control of the executive, judicial and legislative branches of government, and where calls for political reform, or separation of powers, can be seen as threats to stability.

As we go to press we are close to the 30th anniversary of the Tiananmen Square killings, when thousands of protesters all over China, from all kinds of backgrounds, had felt passionately that their country was ready for change – for democracy, transparency and separation of powers.

Last year, the Hungarian parliament passed a law allowing the creation of administrative courts to take cases involving taxation and election out of the main legal system (see p34). Critics saw this as eroding the gap between the executive and the justice system. But then, at the end of May 2019, there was a U-turn, and it was announced that the courts were no longer going ahead. It is believed that Fidesz, the governing party in Hungary, was under pressure from its grouping in the European Parliament, the European People’s Party.

If it were kicked out of the EPP, Hungary would have in all likelihood lost significant funding, and it is believed there was also pressure from the European Parliament to protect the rule of law in its member states.

But while this was seen as a victory by some, others warned things could always reverse quickly.

Overall the world is fortunate to have many lawyers who feel strongly about freedom of expression, and the independence of any justice system.

Barrister Jonathan Price, of Doughty Street Chambers, in London, is part of the team advising the family of murdered journalist Daphne Caruana Galizia over a case against the Maltese government for its failure to hold an independent inquiry into her death.

He explained why the work of his colleagues was particularly important, saying: “The law can be complex and expensive, and unfortunately the laws of defamation, privacy and data protection have become so complex that they are more or less inoperable in the hands of the untrained.”

Specialist lawyers who were willing to take on cases had become a necessary part of the rule of law, he said – a view shared by human-rights barrister David Mitchell, of Ely Place Chambers, in London.

“The rule of law levels the playing field between the powerful and [the] powerless,” he said. “It’s important that lawyers work to preserve this level.”

But, of course, it helps if you can do all three.

How governments use power to undermine justice and freedom

The summer 2019 Index on Censorship magazine looks at the narrowing gap between a nation’s leader and its judges and lawyers.