Ashley Gjøvik, who was fired by the tech giant after blowing the whistle on toxic waste under her office, says her fight will go on

Ashley Gjøvik knew things had become serious when she received an email on 9 September 2021 from Apple’s Threat Assessment and Workplace Violence team asking her to discuss a “sensitive intellectual property matter”.

Gjøvik, 35, had been raising concerns about toxic waste under her office for six months, and had become known as “The Apple Whistleblower”, but this was the first time she had been contacted by this scary-sounding unit.

She emailed back to say she was “happy to help” but with one condition: everything had to be done via email. “I wanted everything in writing so they are not misrepresenting me, they’re not trying to gaslight and intimidate me.”

But she never discovered what the sensitive IP matter was because she was fired for failing to co-operate with the investigation, despite repeated attempts to express her willingness to do so. The letter terminating her employment accused her of disclosing “confidential product-related information” but did not go into detail.

By the time she was sacked, Gjøvik had become a fearsome employee-activist conducting a full-scale campaign over hazardous waste in Silicon Valley. She had gone public on workplace harassment, Apple’s surveillance of employees and its culture of secrecy. But it all began when she started to raise perfectly regular concerns about her own safety and that of her fellow workers.

In February 2020, Gjøvik had moved into a new apartment in Santa Clara, California, only a short drive from her office in nearby Sunnyvale. On the face of it, Gjøvik had an enviable job as a senior engineering programme manager (“We work behind the scenes to make sure everything gets done. We make sure the products actually get out the door”).

She worked hard in a stressful environment – while training to be a lawyer in her spare time – but prided herself on her resilience. Despite the punishing hours of work and study, she was in good health. However, within days of moving into the apartment, she started experiencing dizzy spells.

“I’m starting to have chest pain and palpitations and I’m like, what the hell is going on?” she told Index. She went to see about 20 different doctors and even attended a nervous system clinic at Stanford University. “My blood pressure’s doing crazy stuff. My heart’s doing crazy stuff, but no one knows why. I’m getting all these rashes. No one knows why. I have a growth on my thyroid… all this weird stuff happening all at once.”
By the end of February, she was already so ill that she could barely function: “I’m passing out sitting. I can’t focus. I have to lay down all the time. My body starts going nuts.”

Before the pandemic hit, Gjøvik was already working from home and by March she was signed off on a medical leave of absence.

As the months passed and she became sicker and sicker, Gjøvik realised she was waking regularly at 3am feeling as if she was choking. She began to wonder if her failing health had anything to do with the apartment itself. By chance, one day in September 2020, she was talking to a friend whose husband was an engineer and he suggested she check the carbon monoxide levels. 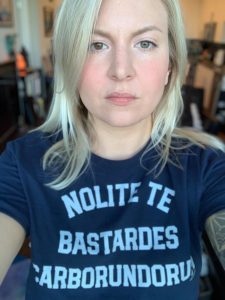 She discovered a spike in volatile organic compounds (VOCs) in the early hours of the morning. These VOCs, essentially toxic gases, are present in everyday household products such as disinfectants, aerosols, pesticides and paints. But they are not usually found at levels dangerous to people’s health. Nor do they tend to spike at particular times without a cause such as cooking or cleaning.

Gjøvik immediately set about doing some serious detective work. When she looked up the environmental assessment report on her apartment she saw it contained a 40-page section entitled “hazardous waste”. Silicon Valley was favoured by defence contractors before it became the centre of America’s tech miracle and was once dominated by factories and heavy industry.

It turned out the apartment was built on a so-called Superfund site, a designation from the US Environmental Protection Agency. Such sites demand a special industrial clean-up before people can live and work in the area, involving deep excavation and “backfilling” with concrete. If this is not carried out properly the risk is that vapour from toxic underground plumes can escape into the atmosphere (and people’s homes).

Gjøvik discovered that so-called “vapour intrusion” can occur through sewer pipes, plumbing, sprinkler systems and air conditioning. She pestered her landlord and the fire department for diagrams of all the pipes in the building to isolate the source. To this day she does not know exactly why the levels of toxic gas spiked at 3am, but she believes it is possible that it had something to do with the automated air conditioning or the flushing of the fire sprinklers.

“The apartment block had 1,800 units with two or three bedrooms. So, thousands of people could be sick and not know it. I literally could not sleep at night. I had to get the word out,” said Gjøvik.

She raised her concerns with the California and Federal EPA as well the state and county departments of environmental health and the local water boards. She moved out of the apartment later that month and all the symptoms stopped immediately. She was even able to return to work.

By the spring of 2021, Gjøvik had become an armchair expert on Superfunds, vapour intrusion and the science of toxic groundwater plumes. So when she saw an email from Apple’s environmental health and safety team on 17 March notifying staff of “a large-scale project” across the company’s building portfolio to carry out vapour intrusion testing, alarm bells started ringing.

The building, a slick glass office with an octagonal atrium, had been leased by Apple since 2015 and was known to be built on the site of a factory owned by TRW Microwave Inc, a notorious Superfund polluter. Gjøvik found a 2016 report of vapour intrusion in homes next to the office and a 2019 lawsuit by the EPA against the polluters. The real concern was the presence of trichloroethylene (TCE), a carcinogen associated with kidney cancer.

Gjøvik was keen to know if the new testing was the result of a new vapour intrusion incident and asked if any testing had been carried out since Apple employees had moved in six years earlier. She was initially told not to discuss her concerns with anyone except her manager, the HR department and environmental health and safety so as not to cause panic.

But already Gjøvik was building a reputation as a toxic waste whistleblower through the campaign around her Santa Clara apartment. She had written an article in the local paper, San Francisco Bay View, entitled “I thought I was dying: My apartment was built on toxic waste”. She had also brokered a meeting with California Senate member Bob Wieckowsi to discuss her concerns.

In mid-April she visited experts in public health and occupational medicine at University of California San Francisco and it became increasingly clear that it would be difficult to separate her concerns about her former apartment from those about her office.

Throughout the spring and summer of 2021, Gjøvik put pressure on Apple to reveal why the new testing was being carried out and whether it was connected with cracks that had appeared in the floor of her office. She also urged her employers to test the air in the office before the cracks were repaired to establish whether workers had been put at risk since 2015.

Apple was planning for the post-pandemic return to work, but Gjøvik said she felt it was unsafe for her and her colleagues to return to work without assurances about the toxic waste under their office. Some co-workers had been given special permission to return to work as early as May 2020.

The relationship with Apple had almost completely broken down by this point. The company did begin an investigation into Gjøvik’s complaints of bullying and sexual harassment, but she believes this simply sparked further intimidation. In a last-ditch attempt to force Apple to engage publicly, she began live-tweeting her interactions with the company and eventually, in August, she was suspended on indefinite administrative leave.

In a statement on the case to the tech website The Verge, Apple spokesperson Josh Rosenstock said: “We are and have always been deeply committed to creating and maintaining a positive and inclusive workplace. We take all concerns seriously and we thoroughly investigate whenever a concern is raised and, out of respect for the privacy of any individuals involved, we do not discuss specific employee matters.”

But Gjøvik is refusing to roll over: “I want to document it and show the world this is what Apple did: You poisoned me physically, mentally, spiritually. Fuck you guys.”

Ashley Gjøvik has become a nightmare for Apple, which prides itself on its employees’ loyalty. Following the classic whistleblower playbook, rather than address the issues she raised about toxic waste, the company has taken the decision to shoot the messenger.

One response to ““Apple poisoned me: physically, mentally, spiritually””