Two Turkish writers discuss Index on Censorship's new magazine, which looks at how playwrights and directors are resisting oppression

Death threats targeting a playwright who has become the target of the Turkish government; self-censorship that messes with your thoughts and changes how a play is written – these were just two things that were discussed as part of the launch this week of the winter issue of Index on Censorship magazine, Playing With Fire: How theatre is resisting the oppressor. In this new issue, writers, playwrights and actors discuss how the world of theatre is facing and confronting censorship around the globe. As reflected in the magazine and at the event, which was held on Monday, the theatre world still has the strength to bring people together, despite censorship.

The launch event specifically focused on Turkey and featured a conversation between the playwright Meltem Arikan and the writer Kaya Genç. The conversation was led by Kate Maltby, critic, columnist, scholar and deputy chair of Index on Censorship’s Board of Trustees.

Arikan told the audience that her first experience of censorship dates back to 2004, when her novel Yeter Tenimi Acıtmayın (Stop Hurting my Flesh) was banned by the Committee to Protect Minors from Obscene Publications.

“I protested a lot and nobody joined me. Before my book was banned, people loved watching me on television. I was openly talking about women. Now I can see that censorship is a similar problem all around the world, not only in Turkey,” said the Turkish and Welsh author who was short-listed for the Freedom of Expression Award in 2014 by Index. Arikan’s play Mi Minor was accused by the Turkish authorities as provoking the Gezi Park protests in 2013. She says that after Mi Minor was performed, she received death and rape threats constantly:  “If you are a woman they focus more on your gender.” 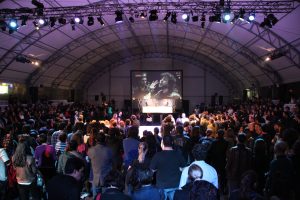 “Self-censorship affects the tone of your writing, including the adjectives you use. I started writing in English for Index, which gave me a great amount of liberty,” said Genç, a journalist who lives in Istanbul and is a contributing editor for the magazine.

Genç told everyone watching the event that Turkish theatre was flourishing when Mi Minör’s play came out, although most of the plays were about torture and Turkish prisons in the 1980s, instead of contemporary Turkey.

“It’s very important that people like Meltem speak out. I see forced exile in Turkey as a tragedy,” he continued.

In Arikan’s words, she had to give up on Turkey. Today, she feels at peace with that decision.

“In Wales I feel I found my home. I’m so happy here. When I came here, at first I tried to give up on writing, but I couldn’t. There is a difference of attitude in the United Kingdom.”

She said: “We need more courageous writers in theatre.”

Maltby, who has written a piece for this edition on Belarus Free Theatre, said that one thing that clearly comes to mind when she thinks about theatre and dissent is theatre’s power to bring people together

“It’s a unique moment where there are a bunch of people who have never met before, but are suddenly physically inhabiting the same space, even in the social media landscape,” she said.

Playing With Fire: How theatre is resisting the oppressor, is out next week. Click here for information on how to read it.