MAGAZINE
"I wrote a play then lost my home, my husband and my trust"

I am a woman kicked out of Heaven.
I am a writer tried for treason, facing life in prison.
I am an exile defined as others.
I am autistic, pushing myself to be normal.
Only to become invisible.

I’m 52 years old. Since childhood, I have always felt alienated from my environment. The more petulant I became, the more walls I built between myself and the world, the greater the desire to flee grew. Not knowing from whom and from what I’m running away, only having the desire to shelter somewhere else, anywhere else. It is hard to be weird and different to others but not know why.

It has done irreparable damage to my self-esteem. I felt trapped inside a cocoon woven of my unhappiness. I was a thing apart. Other people were strictly separate from me. I felt this separation keenly.
This distinction was so clear in my childhood, as a young girl and even now it is the same…

For years, I established completeness in my inner world with all my broken fragments. Without expectation, motionless, distant, introverted. I drowned in words, definitions, tasks… I forgot my essence. I learned to mask myself because I have always been judged.

I have a lot of voices in my mind, ghosts of decades-old voices. Telling me how I should be…

In 2011 I wrote an absurd play called Mi Minör set in a fictional country called Pinima. During the performance, the audience could choose to play the President’s deMOCKracy game or support the Pianist’s rebellion against the system. The Pianist starts reporting all the things that are happening in Pinima through Twitter, which starts a role-playing game (RPG) with the audience. Mi Minör was staged as a play where an actual social media-oriented RPG was integrated with the physical performance. It was the first play of its kind in the world.

Blamed for the Gezi Park protests

A month after our play finished, the Gezi Park demonstrations in Istanbul started. On 10 June 2013, the pro-government newspaper Yeni Şafak came out bearing the headline ‘What A Coincidence’, accusing Mi Minör of being the rehearsal for the protests, six months in advance. The article continued, “New information has come to light to show that the Gezi Park protests were an attempted civil coup” and claimed that “the protests were rehearsed months before in the play called Mi Minör staged in Istanbul”.

After Yeni Şafak’s article came out, the mayor of Ankara started to make programmes on TV specifically about Mi Minör, mentioning my name.

In one he showed an edited version of one of the speeches that I made six years ago about secularism, misrepresenting what I said in such a way that it looked like I was implying that secularism was somehow antagonistic to religion.

What I found so brutal was that the mayor did this in the knowledge that religion has always been one of the most sensitive subjects in Turkey. What upset me most was the fear I witnessed in my son’s eyes and the anxiety that my partner was living through. 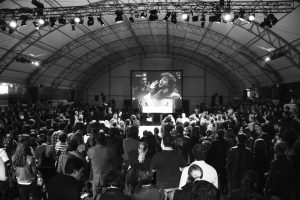 The play was being discussed regularly on TV, websites and online forums and both Mi Minör and my name were being linked to a secret international conspiracy against Turkey and its ruling party, the AKP. Many of the comments referenced the 2004 banning of my book Stop Hurting my Flesh. I received hundreds of emails and tweets threatening rape and death as a result of this campaign.

For three nightmarish months, we were trapped in our own house and did not set foot outside. One day, I saw that one of my prominent accusers was tweeting about me for four hours. The sentences he chose to tweet were all excerpts from my research publication The Body Knows, taken out of context and manipulating what I had written. Those tweets were the last straw.

Wales is protecting me

I left our house, our loved ones, our pasts. We left in a night with a single suitcase and came to Wales, which had always been my dream country. I never imagined my arrival in Cardiff would be like this; feeling bitter, broken and incomplete.

Two years later my partner, who had remained in Turkey, and I got married. In the first month, I learned my husband had brain cancer. Operations, chemotherapy, radiotherapy followed… Within a year, I lost him. I visited him, but sadly I wasn’t able to go to his funeral because of new accusations levelled against me. This was a turning point in my life. I lost my husband. I lost my trust in people. I lost my savings to pay for his care. I lost everything.

In all of this emotional turmoil, I started walking every day for five or six hours. Geese became my best friend and my remedy. I walked for months. I walked and walked everywhere, in the mountains, in the valleys, at the seaside.

These walks had a transformative effect on me. I had discovered a way to live as a woman who had learned to accept herself, rather than a shattered and a lost woman.

Maybe there is an umbilical cord, beyond my consciousness, between me and the wild nature of Wales. I feel this land always wrapped itself around me, talked to me like a mother during the difficult time in my life. For this reason, I wrote my latest play; Y Brain/Kargalar (Crows), written in Welsh and Turkish and produced by Be Aware Productions. It describes my story, the special place this land has in my life and how it transformed me. The title refers to my constant companions during this time – the crows. One reviewer called it “unashamedly lyrical…even as it touches on dark themes”.

On 20 February 2019, as the play was being staged, a new indictment was issued against 16 people, including me, over Mi Minör; I now face a life sentence. Because of this absurd accusation, I feel ever more strongly that Wales is protecting me.

It was at this time that I was diagnosed with Asperger’s syndrome/autistic spectrum disorder and I’ve received many answers about myself as a result. From this moment, a new discovery and understanding started. I set out to discover myself with this new knowledge. As soon as I could know who I’m not, I could find out who I am.

I realise that my wiring system simply makes it harder for me to do many things that come naturally to other people. On the flip side, it is important to be aware that autism can also give me many magical perceptions that many neurotypicals simply are not capable of. I believe I was able to write Mi Minör because of my different perceptions.

I have therapy twice a week and I have started to understand what I have been through all my life. My therapists told me that I was manipulated and I was emotionally and sexually abused by whom I love and trust the most; it was a big shock for me. I spent half of my life trying to help abused victims, and I never thought I was a victim. They said this is very common because autistic women are not aware of when they were used. How could I have been so blind?

I couldn’t work out that I was being played by others, like a fish on a line. As an autistic, communication is about interpreting with a basic belief in what people tell me because I don’t tell lies myself. But I have learned how much capacity for lies exists. Autistic people can be gullible, manipulated and taken advantage of. But I learned that regret is the poison of life, the prison of the soul.

The most significant benefit of this process is that I am learning again like a child to re-evaluate everything with curiosity and enthusiasm. It also gives me the chance to reconstruct the rest of my life without hiding myself, being subjugated to anyone, and living without fear.

Autism diagnosis and discovery were liberating for me. There is still not enough autism spectrum awareness even today. That is why I decided to come out about my autism. I strongly believe that if those of us who are on the autistic spectrum share our experiences openly, then it wouldn’t only help other autistic people, it would help neurotypical people to better understand both us and our behaviour.

Looking back at the last few years, I have been thrown into navigating most of the challenging aspects and life experiences and there has been a complete cracking of all masks.

Fortunately, during this process, I have been learning a lot about myself and how I have masked myself as an Aspie-woman… For me, masking myself is more harmful even than not knowing I’m autistic. Masking means that I create a different Meltem to handle every situation. I have never felt a strong connection with my core. When I am confronted with emotional upset, my brain immediately goes into “fix it” mode, searching for a way to make the other person feel better so I can also relieve my own distress.

For most of my life, I’ve allowed myself to fit in with how I thought others wanted me to feel and act, especially those I loved. My dark night gave me so much pain I broke free and started to care for myself and heal. Taking me back to my primordial self, not the heroic one that burns out, to step back from the battle line of existence, to remember the gods and spiritual parts of nature, my own nature and the person I was at the beginning.

The last two years have been exciting for me. It is as if I died and was reincarnated again. In the end, I understand that my true nature is not to be some ideal that I have to live up to. It’s ok to be who I am right now, and that’s what I can make friends with and celebrate. I learned it’s about finding my own true nature and speaking and acting from that. Whatever our quality is, that’s our wealth and our beauty. That’s what other people respond to. I’m not perfect, but I’m real…

One response to ““I wrote a play then lost my home, my husband and my trust””