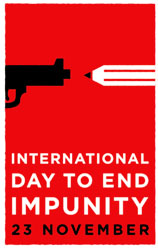 To mark the inaugural International Day to End Impunity on  23 November,  join Index in demanding justice for journalists’ murdered in the line of duty

Today Index on Censorship, Article 19, the Committee to Protect Journalists and English PEN  join dozens of freedom of expression organisations around the world to mark the inaugural International Day to End Impunity.

In the past 10 years, more than 500 journalists have been killed. In nine out of 10 cases, the murderers have gone free. Many others targeted for exercising their right to freedom of expression — artists, writers, musicians, activists — join their ranks.

On this day two years ago the single deadliest event for the media took place when 30 journalists and two support workers were brutally killed in Ampatuan, Maguindanao province, The Philippines. The journalists were part of a convoy accompanying supporters of a local politician filing candidacy papers for provincial governor. In total the “Maguindanao Massacre” as it has come to be known, claimed 58 victims. Not one of more than a hundred individuals suspected of involvement in the atrocity has been convicted yet.

We join those in the Philippines not only in honouring their slain colleagues, friends and family members, but demanding justice for them and hundreds more in Russia, Belarus, Pakistan, Sri Lanka, Mexico, Colombia, Iraq and Somalia and other countries where killings of journalists and free expression activists have repeatedly gone unpunished. Above all we demand an end to the cycle violence and impunity.

This year alone at least 17 journalists were murdered for their work. These include Pakistani journalist Saleem Shahzad, whose body was found May 31 showing signs of torture. They include Mexican journalist and social media activist Maria Elizabeth Macías Castro Macías, whose killers left a computer keyboard and a note with the journalist’s body saying she had been killed for writing on social media websites. These heinous acts not only silence the messenger, but are intended to intimidate all others from bringing news and sharing critical voices with the public.

We call on governments around the world to investigate and prosecute these crimes and bring an end to impunity.

23 November marks the anniversary of the 2009 Ampatuan massacre, in which 34 journalists were murdered in an election-related killing in the Philippines, making it the single deadliest incident for journalists in recent history.