"I feel strong": Moroccan rapper El Haqed defiant after concert is shut down by police 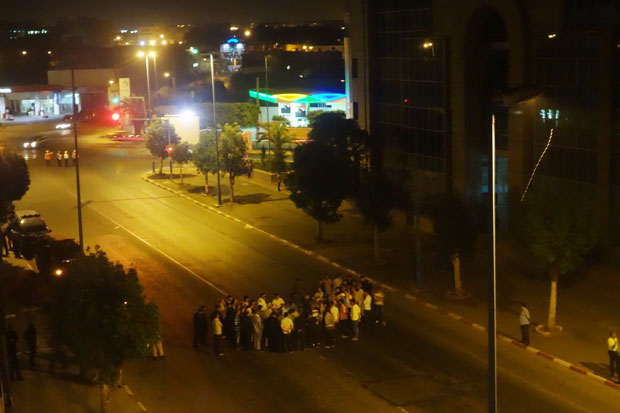 Police blocked access to the concert venue by closing down the streets around it. (Photos: Mari Shibata for Index on Censorship)

A former Index Youth Advisory Board member travelled to Casablanca to see Moroccan rapper El Haqed’s first concert in the country. This is her account of the police crackdown that silenced the 19 June performance.

I had travelled nine hours for a concert that the Moroccan state did not want its people to see.

“This is going to be the first time I will have concert here, where I am from,” rapper Mouad “El Haqed” Belghouat told me ahead of the scuttled 19 June show at The Uzine, a Casablanca concert venue and cultural centre supported by the Touria and Abdelaziz Tazi Foundation.

“I’ve been preparing for this moment for a week. There have been jam sessions every day to make this the very best show.”

Belghouat, who won the Index on Censorship Award for Arts in March, is known as El Haqed, roughly translated as The Enraged in English. His music, which describes Morocco’s corruption and social injustice, is driven by the Arab Spring that sparked Casablanca’s pro-democracy February 20 movement.

Having been imprisoned several times since 2011 – during which he went on hunger strike for what he calls “appalling conditions” – he has regularly been silenced by officials. El Haqed has been limited to distributing his music on YouTube and sharing updates on Facebook, where he has an avid fan base of over 43,000.

Winning the Index arts award led to opportunities for El Haqed to perform in other European countries. In May he performed in Oslo. Fans back in Morocco were eagerly awaiting the chance to see him live. His planned concert drew people from around the country.

“I have come all the way from the capital city of Rabat to see Mouad’s first concert in Morocco,” said Hamza, a 22-year old LGBT activist, who declined to provide a last name. “I made sure I got here early, and catch up with everyone I know who has been involved in the February 20 movement where Mouad’s songs were our anthems.”

Just moments after his band Oukacha Family began their sound check and testing the stage lights, word came from the front of house that police had gathered outside. Someone had also been arrested as they tried to enter the building to see the concert.

“My friends and fans outside are telling me the police are growing in numbers and are blocking the street,” El Haqed said as his phone continued to ring. “Those who organised this concert are also informing me that the police are threatening me to stop this from happening.” 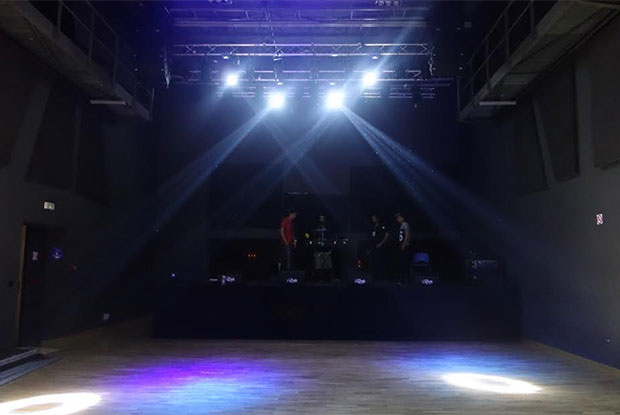 As the band began its sound check, word came of the police presence outside.

The atmosphere suddenly became tense. The 20 or so people already inside the five-storey building were at risk of arrest. Most of them had been inside since the early afternoon to study whilst fasting for Ramadan, and to pursue their creative interests in the practice rooms and artistic spaces.

As the calls kept flooding in with updates, Mouad instructed everyone to wait in the back yard as a way of occupying the building without being identified by the police, who were able to see through the glass windows of the well-lit front entrance.

In the midst of the confusion, it was at times difficult to identify who could be trusted. Local journalists who arrived at the scene were blocked from entering the street and could not get near the building. As the only non-Moroccan inside, I was being asked with suspicion whether I was from media; getting out a visible video camera was now a definite no-go zone.

“When will officials stop interfering in what we want to do?” sighed Hamza. “This space is so special, it is the only place where young people can express themselves, with the support to explore their creative interests. It is the first space of its kind in Casablanca, where artists can host exhibitions and concerts freely.”

Once Mouad and a handful of key activists located a route around the building that avoided the light, we climbed several flights of stairs to the top floor, crawling along the floor towards a dark room where we could finally inspect what was going on outside. The sight was a shock for everyone, we felt trapped inside the building.

To get images without them spotting us meant flash was off, or hands over any light that was coming out of our phones.

Security officials crowded both the building and the street, ensuring the streets were empty by stopping vehicles coming through. This meant it was now easier for them to identify anybody who caught their eye.

Saja, another El Haqued fan, said she was excited to come and support his first concert in Morocco, but was turned away by police. “As I drove towards the venue, I was stopped by the gas station at the corner of the street and was just told to move. We had no chance to explain ourselves or ask questions, everyone was simply told that the street was closed and therefore weren’t allowed to enter.”

Then we saw officials arriving to cut electricity to the centre. We quickly took the lift downstairs, as Mouad figured that there would be no concert tonight. “This is it,” he said, “we can’t do anything without electricity – we have no power for the microphones, the speakers, or the lights on stage.”

Minutes before the electricity was cut, Mouad tried to upload some pictures to Facebook about what was happening, but failed. With the electricity cut, the wifi signal faded. 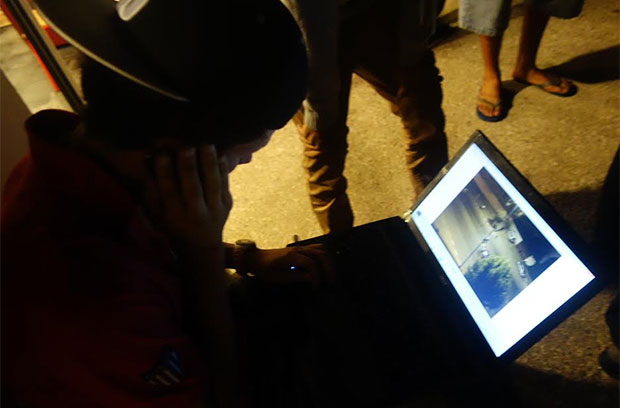 Despite the confusion, El Haqed tried to get the word out to his fans via Facebook.

According to Moroccan press reports, police said that the building, which has hosted several concerts since it opened six months ago, was not up to safety codes, an allegation the centre’s management disputes. Contrary to the claims, the building is equipped with solar panels that provided the building with a small amount of light during emergency situations. 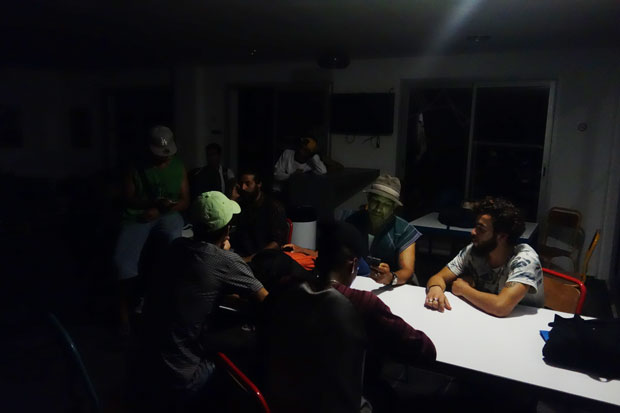 Once the police ordered the power to the centre cut, emergency power kept some of the lights on.

While waiting for news on what was going to happen next, Hamza had realised how lucky we were to have just missed the security officials arriving. “Imagine if they had arrived while we were out breaking fast eating!” he said. “That would have been really brutal, as we would also be left hungry and thirsty on top of all this stress.”

The decision was taken to leave the building at the instruction of the venue’s organisers. Once we managed to bypass the security without getting arrested, journalists who were barred from entering the street crowded around El Haqed to ask him what happened. 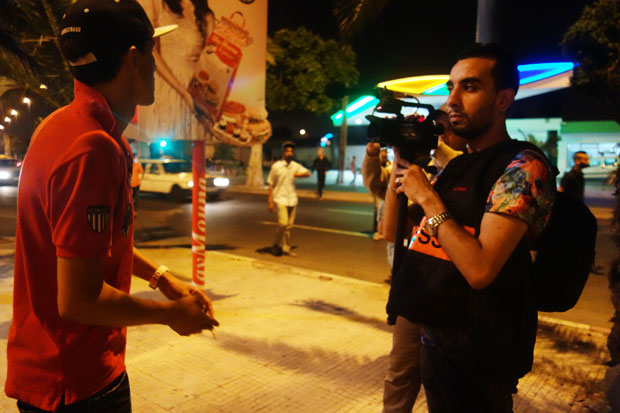 Once outside, El Haqed spoke to local media.

After we drove away from the area in a friend’s car, El Haqed told me that, “despite everything that happened, I feel strong”.

“I think that the government has a reason to bring police to the scene. Their action means my music is strong and is a threat to them. The incident makes me hurt and disappointed but I know I should keep going.”

And supporters like Saja have his back. “Mouad’s music speaks to the poor, those who are struggling and have nothing,” she says. “The cancellation of his first planned concert in Morocco is only going to fuel the desire to hear more from him.”

This article was posted on June 25 2015 at indexoncensorship.org

Mari Shibata
Mari Shibata is a freelance production journalist for Associated Press Television News, and is an award-winning filmmaker whose shorts have been screened at the British Film Institute and several international film festivals.