To coincide with the release of a new short story by Ariel Dorfman in the latest Index on Censorship magazine, we have compiled a playlist of music as protest and resistance

Music has long been used as a form of resistance, from civil rights movements to the fall of the Berlin Wall. The latest issue of Index on Censorship magazine, focusing on taboos and the breaking down of social barriers, features an exclusive new short story by Ariel Dorfman about a military trumpeter who plays a defiant, rebellious song on his instrument.

In honour of the story, we have compiled a playlist of music that has been used as protest and resistance from all over the world. The influence of these songs show just how powerful music can be as a form of rebellion.

Many artists on the list have been forced into exile or censored. Index on Censorship has teamed up with the award-winning makers of the documentary They Will Have To Kill Us First to launch the Music in Exile Fund, which will help support musicians in similar situations.

Ode to Joy has been adopted by many protest movements around the world. Most notably the song was played on the streets of Chile in resistance to the Pinochet dictatorship. Demonstrators gathered outside prisons singing Ode to Joy, giving strength to the prisoners who suffered torture there at the hands of the regime.

Joan Baez – We Shall Overcome

We Shall Overcome is a key protest song of the civil rights movement. The song, which has been covered by various artists, was first used in 1945 by tobacco workers fighting for better pay in Charleston, South Carolina. The song, with its message of solidarity and hope, has been used in many protests around the world, not least in the 1950s and 1960s by activists in the American civil rights movement.

Ndodemnyama we Verwoerd (Watch Out, Verwoerd) is one of the most well-known songs in South Africa due to its association with the campaign against apartheid. Hendrik Verwoerd, who served as prime minister of South Africa until his assassination in 1966, became known as the “architect of apartheid” for his role in implementing the system of racial segregation. Unsurprisingly, he became the subject of many protest songs, including Ndodemnyama we Verwoerd by Vuyisile Mini. Mini became one of the most powerful organisers of the resistance, earning himself the moniker the “organiser of unorganised”. He was sentenced to death in 1964 on charges of sabotage and political crimes and is said to have sung the song while being led to the gallows.

The Scorpions – Wind of Change

November 2015 marked the 25th anniversary of the fall of the Berlin wall. Many songs have been associated with the demise of the wall, which divided Berlin for nearly three decades, particularly Wind of Change by German heavy metal band The Scorpions. The song, one of peace and hope, was released a few months after the wall was torn down and became one of the top-selling singles of 1991. The music video to Wind of Change shows footage of the wall being removed.

The four members of Songhoy Blues met as refugees after being forced into exile by Muslim extremists who banned all music in Mali in 2012. In defiance of the extremists, they formed the desert blues band, refusing to have music taken away from them. They have since gone on to work with Damon Albarn of Blur and Nick Zimmer of the Yeah Yeah Yeahs, been on an international tour and were nominees for the arts category of the Index on Censorship Freedom of Expression Awards 2014.

Irhal became known as the anthem of Egypt’s uprising against President Mubarak’s after singer Ramy Essam performed the song during the 2011 protests in Tahrir Square. Irhal, which urges the president to resign, became internationally known after Essam’s performance was posted on YouTube during the protests. After the revolution, Essam returned to Tahrir Square where he was arrested and tortured by the military council. He was offered safe city residence in Sweden following his arrest and has been living there since 2014.

The Tropicália movement is a brief artistic movement that took place in Brazil in the 1960s. During the movement, which was co-founded by Gilberto Gil and Caetano Veloso, musicians expressed their resistance to the country’s military dictatorship through their music and their socially and politically charged lyrics. The movement only lasted around a year before being suppressed by the military regime. Gil and Veloso were arrested in 1969 and forced to live in exile in London for the political content of their work but returned to Brazil in 1972.

Strange Fruit, most famously performed by Billie Holiday, protests American racism and the lynching of African Americans. The song began as a poem written by teacher Abel Meeropol published in 1937; Who then set it to music and performed it as a protest song at various venues in New York in the late 1930s along with his wife and the singer Laura Duncan.

Foggy Dew is the name of several old Irish ballad. This version of the song chronicles the Easter Rising of 1916 in Dublin when Irishmen fought for the cause of Irish independence. During World War I, thousands of Irishmen served in the British forces. Many Irish nationalists felt they should have stayed in Ireland and fought for Irish independence, which is reflected in the song.

Killing in the Name – Rage Against The Machine

American rap-metal band Rage Against the Machine released Killing in the Name in 1992, six months after the Los Angeles riots, which were triggered after four white police officers were acquitted of beating black motorist Rodney King. The song is institutional racism and police brutality. Known for its excessive use of expletives, Killing in the Name originally received little air time. 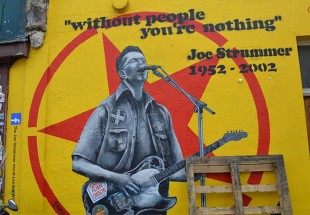 When The Clash released White Riot, many people thought it was a song advocating some kind of race war. This couldn’t be further from the truth. With the lyrics, Joe Strummer was appealing to white youths to find a worthy cause to fight (or riot) for, just as many black youths had in the UK at the time. At its heart, it is a song about class and race.

Bob Marley – Get Up, Stand Up

Bob Marley is renowned for his songs about peace, love and resistance. With Get Up, Stand Up being one of his most well-known protest songs. Marley wrote the song with fellow Jamaican musician Peter Tosh as a challenge to oppression. The song is famed for the lyrics: “You can fool some people sometimes but you can’t fool all the people all the time.”

Joe Hill was a miner, songwriter and union organiser for the Industrial Workers of the World (IWW). Hill was executed in America in 1915 following a controversial trial in which he was found guilty of the murders of John G Morrison and his son Arling. Hill refused to testify at his trial believing he would be worth more to the labour movement as a dead martyr than alive. After his death, Hill was the subject of songs by various artists, including Paul Robeson, Joan Baez and Pete Seeger.

A Change Is Gonna Come has been covered by various artist but was originally written by Sam Cooke. The song is another civil rights anthem concerning the struggles of African Americans during the 1960s. Cooke was said to have been inspired to write to song by various events in his life, predominantly being turned away from a “whites only” hotel. The singer was shot and killed just before the song was due to be released as a single in 1964.

Tinariwen are made up of musicians from the Tuareg community, whose music reflects the issues faced by the Tuareg people. The musicians received military training when they were living in exile in Libya in the 1980s, and many of the members of Tinariwen were rebel fighters in the 1990 revolt against the Malian government. In 1991, the collective, who’s name translates to “the people of the desert”, left the military to focus on music on a full-time basis.

Eagles of Death Metal – People Have the Power

On 8 December, Eagles of Death Metal joined U2 on stage in Paris, just three weeks after Muslim extremists launched an attack at their concert at the Bataclan Theatre, killing 89 people, plus 41 in two other attacks. Together the bands performed a cover of Patti Smith’s People Have the Power, showing bravery and resistance against the terrorists who left the city in fear.

You can read the Ariel Dorfman’s new short story, All I Ever Have, about music as a form of resistance in the latest Index on Censorship magazine. Each magazine sale helps Index on Censorship fight for free expression worldwide. Order your copy here, or take out a digital subscription via Exact Editions (just £18 for the year).