Europe has a long tradition of free speech, including a freedom of the press, but as recent events show the practice may not be in such rude health 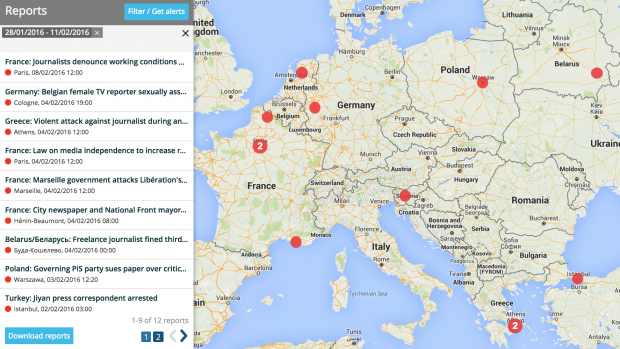 Freedom of the press has always been a pretty reliable litmus test for the state of any democracy. However, as Index on Censorship’s Mapping Media Freedom project shows, countries that are seen as traditionally open, with constitutions protecting freedom of expression, are currently rife with violations against the media.

“It is extremely troubling that media workers have been physically and sexually assaulted, arrested and denied access to key reporting areas in countries with strong democratic institutions,” Hannah Machlin, Index’s Mapping Media Freedom project officer, said. “We hope governments take action to prevent these types of violations from occurring at such a frightening rate.”

So far this year, Mapping Media Freedom has verified 61 media violations. Here are just five examples from the last fortnight that highlight some of the failures of these democracies to live up to their own standards.

Just weeks after hundreds of women were sexually assaulted on the streets of Cologne, a journalist, Esmeralda Labye, was sexually assaulted while reporting from the Cologne carnival for Belgian TV station RTBF on 4 February. One man grabbed her breast and another kissed her neck while she was live on air.

“Two or three men gathered behind me and attempted to make themselves the centre of my attention,” Labye told The Guardian. “I was focusing on the broadcast, and then I felt a kiss on my neck.”

Writing for RTBF online, Labye condemned the “wretched and cowardly men” who assaulted her and complained of the increasing difficulty for female journalists to do their job without being harassed.

On 4 February, plans to increase the role of the CSA — the French broadcast watchdog whose members are chosen by the government — as a guarantor of the independence of the media were discussed in the French National Assembly.

The French journalists’ union SNJ criticized the planned bill, written by a Parti Socialiste MP, stressing that the CSA is not independent from political influence. They wrote: “The CSA has no responsibility and legitimacy on matters related to the control of information or journalists. It should have none!”

Protests against the Greek government’s plan to change its pension policy as part of the country’s third international bailout brought an estimated 40,000 people onto the streets of Athens and other cities, including journalists. On 4 February, Dimitris Perros, a journalist from the local radio station Athens 9,84, was violently attacked by unknown assailants while covering the demonstration. He was transported to the hospital with major injuries.

Newspapers reported that the attack was denounced in statements from across the political spectrum including Syriza,PASOK and the Greek Communist Party and the Journalist’s Union of the Athens Daily Newspapers. “The strangers who approached him asked him first if he is a journalist and when he answered affirmatively they started beating him with planks, while the police looked on,” the union stressed in an announcement.

On 28 January, several journalists were denied access to a citizens’ meeting about the possible creation of a new asylum seeker centre in the village of Luttelgeest, according to newspaper reports. An emergency regulation was issued to refuse journalists access to the meeting. The mayor also banned journalists from travelling within a radius of five kilometres of the village.

The Dutch Association of Journalists, the NVJ, condemned the measure saying that it was not the first time journalists have been banned. “It has happened many times now,” NVJ secretary Thomas Bruning said. “If journalists are denied access, they are obstructed from doing their job. This is alarming and should not happen in a democracy.”

By seizing control of the media, whose footsteps is #Kaczynski following on? #Poland #Putin https://t.co/vIbDWgrG6q

Even Europe’s youngest democracies are fighting off attacks on media freedom.

As Index on Censorship has previously reported, there is a growing trend in Poland of the government using defamation actions to stop criticism in the media. The most recent example, on 3 February, saw Poland’s ruling Law and Justice party, PiS, file a libel suit against the largest daily newspaper in the country, Gazeta Wyborcza about an opinion piece it disliked.

The article argued that PiS and Poland’s president Andrej Duda have behaved like a “mafia state” for pardoning former anti-corruption official Mariusz Kaminski, for abuse of power. Duda issued the pardon before Kaminski had exhausted the appeals process, a point that the author of the piece, Wojciech Czuchnowski, criticised in his opinion piece.