Murad Subay: "I dedicate this award today to the unknown people who struggle to survive"
13 Apr 2016
BY INDEX ON CENSORSHIP 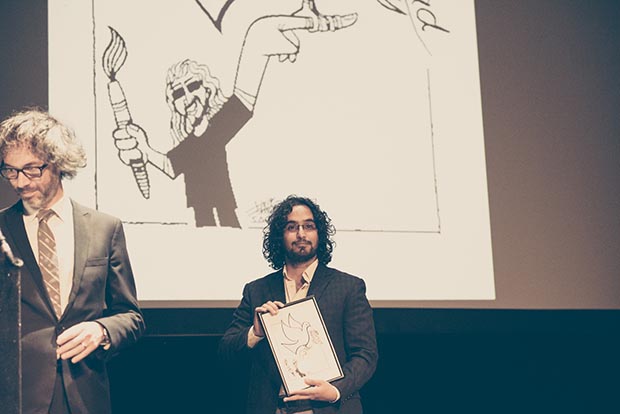 Artist Murad Subay uses his country’s streets as a canvas to protest Yemen’s war, institutionalised corruption and forced “disappearings”. Since beginning a street art protest in 2011 Subay has launched five campaigns to promote peace and encourage discussion of sensitive political issues. All his painting is done in public during the day and he encourages fellow Yemenis to get involved. Subay has often been targeted by the authorities, painting over his works or restricting him from painting further.

I am honoured to be here with all of you today and for that, I would like to thank Index on Censorship for giving me this award, for believing in me and for acknowledging our work back home.

I want to thank my friends who join me every time I paint the walls of the streets and who share with me the same concerns over the issues that are really important. I also want to thank the good people of Yemen who have always supported us and who were the spirit of every campaign I launched to paint in the streets.

I would like to take this opportunity tonight to shed light on one of the biggest concerns for me and for many Yemenis. As many of you know, Yemen is going through one of the hardest times in its history, with the outbreak of internal and regional armed conflicts. Yemenis suffered greatly even before these conflicts broke out, and they’re going through this alone, but it seems that the heavy losses that Yemenis endure every day isn’t enough yet to capture the interest of the international community and media.

I dedicate this award today to the unknown people who struggle to survive, and I do not talk about those who are fighting the war with their weapons. Rather, I talk about every person who suffers a serious injury, who lost a family member or a loved one, who lost their home, school and job and who struggles to keep their family alive when they were starved to death. Those women, men and children are the real heroes that we should all bow to in respect for moving on and holding on to life.

Therefore, for the world’s presidents, kings and leaders who misused their power, it is true that you might never be tried, but you should know that you are leaving behind a dirty legacy in the time when you should concentrate on the real issues that face humanity, rather than throwing mindless wars and engaging the world in killing one another.

Again, I thank Index on Censorship and all its team for this award, and I thank you all for listening to me sharing my concern with you. Let’s hope for peace to prevail in Yemen as soon as it can be. 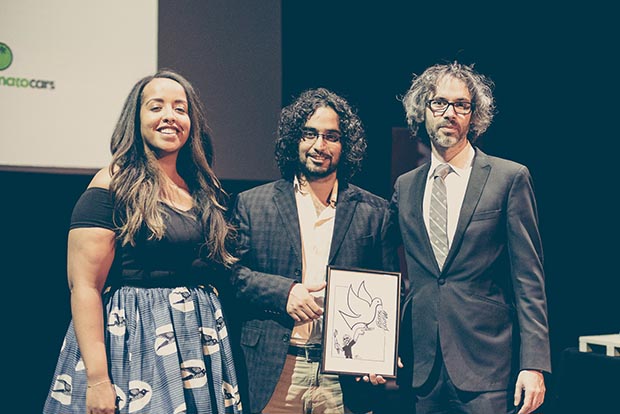 2016 Freedom of Expression Awards: The other acceptance speeches
Bolo Bhi: “What’s important is the process, and that we keep at it”
Zaina Erhaim: “I want to give this award to the Syrians who are being terrorised”
GreatFire: “Technology has been used to censor online speech — and to circumvent this censorship”
Smockey: “The people in Europe don’t know what the governments in Africa do.”

One response to “Murad Subay: “I dedicate this award today to the unknown people who struggle to survive””