EVENT
Women on the front line: Zaina Erhaim and Kate Adie on the challenges of war reporting
26 Sep 2016
BY CAMERON OCHSE 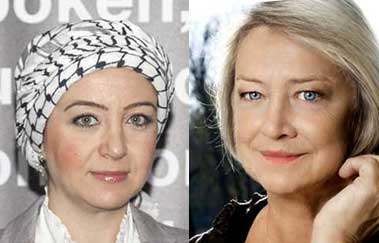 On 24 September Index on Censorship’s CEO, Jodie Ginsberg, gathered with former BBC chief news correspondent Kate Adie and 2016 Index award-winning journalist Zaina Erhaim in Kew Gardens to discuss journalism in war  zones and what it’s like to be a woman reporting from crisis points.

Kate Adie has been a prominent figure in journalism since the 1980s, covering, among other major events, the 1980 London Iranian Embassy siege, the Tiananmen Square protests, the Rwandan Genocide and the war in Sierra Leone. After 14 years as BBC’s chief news correspondent, Adie now works as a freelance journalist, author and presents From Our Own Correspondent on BBC Radio 4.

Zaina Erhaim is a Syrian journalist known for her activism in Aleppo and teaching journalism skills to the men and women in Syria. Erhaim currently works as the Syria project coordinator with the Institute for War and Peace Reporting.

Ginsberg asked Adie and Erhaim what influenced them to become journalists. Erhaim said her mother was the only family members that supported her career choice. The rest of her relatives told her: “Nobody wants to marry a journalist.”

Growing up in a conservative society where the regime censored everything, Erhaim was inspired to study journalism in the UK. After the escalation of the war in Syria, Erhaim knew that she could never abandon her home in Aleppo. She returned to the ravaged city to train journalists, particularly women, to spread the untold stories of those hurt by the war.

Adie discussed how her generation was affected by the aftermath of World War II, with women being incorporated into the workforce during warfare then pushed “back to the kitchen” after the war ended. She admits that growing up she had no expectations for her career, but after visiting East Berlin during the Cold War, she discovered that the rest of the world was not as comfortable as the one she grew up in, fueling her desire to become a journalist.

Exploring the challenges woman face in journalism, Adie said that there were obvious concerns in countries that view women as secondary beings. The fear of being raped or assaulted is always present, she said, adding that there are judicial systems in place that could see her imprison for being a female out alone in public.

Adie emphasised that she does not like to be portrayed as a “woman journalist” but instead a “journalist who happens to be a woman”.

As a woman, Erhaim was not allowed to travel to the “front line” of the Syrian war. However, this allowed her to focus on the unreported stories and train Syrian women and men in journalism. She experienced some difficulty when training men, saying that many refused to look her in the eye because they thought it shameful to be taught by a woman. This was not something she cared about, considering her focus was to get the untold stories to the public.

An audience member later asked whether there are real front lines in warfare anymore, to which both Erhaim and Adie answered no. Adie stated that contemporary front lines are “complete fantasy,” stressing that war is no longer something that stays on the battlefield, but something that divides a village and follows you home.

Parting with advice for aspiring journalists, Erhaim simply stated: “Don’t go to war zones.” Adie reminded the audience that journalism is tough and often doesn’t pay well, but telling people about the world and bringing a story back will be the most rewarding feeling a journalist can accomplish.

“Journalism is about telling the truth and getting the story out. It’s unexpected & extraordinary.” In awe of Kate Adie #writeonkew @WIJ_UK

24 Sept: Women on the front line at Write on Kew