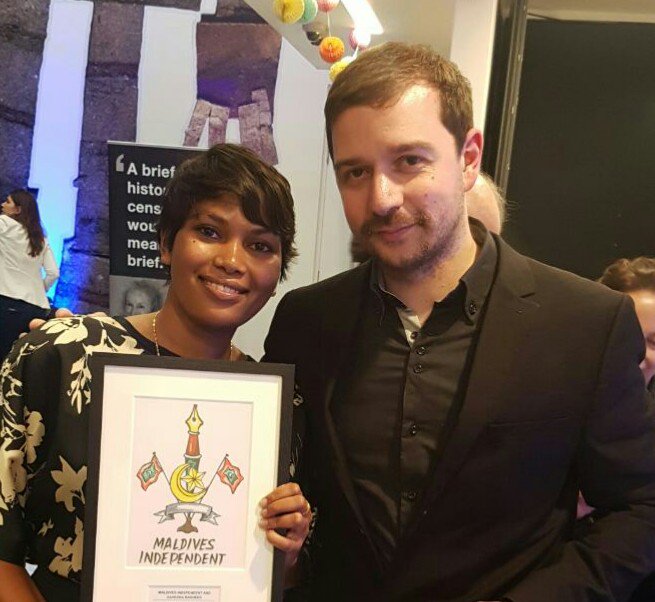 Thousands of miles separate the Maldives from Serbia, but Zaheena Rasheed, the Index award-winning journalist and former editor of Maldives Independent, and Stevan Dojcinovic, editor-in-chief of the Serbian investigative website KRIK, but both described similar attacks on press freedom at a panel discussion at the Corinthia Hotel in London.

Rasheed lives in exile, having been forced to flee the Indian Ocean archipelago after working on an Al Jazeera documentary critical of the Maldivian government. She said she escaped just in time – a man who left a day later “barely made it out of the airport”.

Rasheed spoke of the intimidation tactics that independent news media had been subject to in the country. “Some newsrooms had gangs going inside of the newsroom and saying specifically we are not leaving until certain articles were taken down,” she said.

The Maldivian government claims that these gangs are criminals beyond their control.

As violence does not deter outlets like Maldives Independent from their investigative work, president Abdulla Yameen’s regime resorted to legal means, including imposing a draconian defamation law.

Rasheed said: “The definition of defamation is so broad that I could be sued for something I think, it doesn’t have to even be expressed. It could be a gesture. If it’s a gang or criminals after you, you can hide and avoid it, but when it’s the government you just can’t.”

On Serbia, Dojcinovic said that most in the West do not realise the extent of the country’s problems. “There’s not a real, clear picture of Serbia in the EU regarding how wild corruption and crime are,” he said.

Both journalists have seen hard-won democratic freedoms erode quickly. In Serbia this slide began in 2012 when Aleksandar Vučić was elected prime minister (this month, Vučić was also elected as the country’s president). Dojcinovic said: “The government has managed to destroy and undermine all of the democratic institutions built over 12 years within two years. We no longer have an independent judicial system and it’s the same with the media.”

In the Maldives, 2012 also left its mark. “Since the coup, a lot of democratic gains have been lost. What we saw in the first couple of years after the coup were physical assaults against journalists,” Rasheed said. “There were murder attempts, death threats and one TV station was even torched.”

She said that police turned a blind eye to these attacks. “All of the CCTV cameras were turned away from the building. The police just weren’t there.”

Whilst the threats are different in Serbia, Dojcinovic described a choked media landscape: “It’s not possible to see criticism of the government in the mainstream media. Not on any newsstand or on any TV frequency. They have destroyed all of these institutions.”

Dojcinovic said that the Serbian government is falling into the same patterns as Slobodan Milosevic’s regime: “It’s the arrests of journalists by the same group of people who were behind the murder of journalists back in the 1990s. They can’t cross this line now because it would ruin their reputation with the EU, so they find a way to make your life a nightmare without leaving fingerprints.”

Reprisals for his work have included three smear campaigns: he has been tagged as a criminal for his links to organised crime, branded a foreign agent, and had his personal life put on display.

“You cannot fight this much either because you can only publish on the internet,” Dojcinovic said. “That’s nothing compared to the newspapers which present us in this way.”

In the Maldives, however, there appears to be no such line. Rasheed said: “A member of our team was disappeared in 2014. Then a well-known gangster, who we think was involved in our colleague’s disappearance, vandalised the security cameras [at our office] and left a machete at our door. And then I got a text message saying: ‘You’re next.’”

Rasheed thinks that her colleague Ahmed Rilwan was targeted because he was seen to be in favour of secularism, and negative stories about Islamic radicalisation raise the government’s ire. “What really bothers them are these stories of growing radicalisation in the Maldives because that is what puts tourists off,” she said.

Rasheed also spoke about the difficulties of constantly fighting such repression. She told the audience that she had, to some extent, been traumatised by her experiences. However: “As a journalist, the most important thing to do is to live to tell the story.”

Read more
Samuele Volpe
Samuele Volpe is a trainee journalist and a postgraduate srudent at the Department of Journalism Studies at Sheffield University.
Latest posts by Samuele Volpe (see all)