Despite official efforts to stop it in its tracks, Cuba saw the successful completion of its first independent art biennial, organised without the support of the state, on 15 May. Artist Luis Manuel Otero Alcantara and curator Yanelys Nuñez Leyva, members of the Museum of Dissidence, winner of the 2018 Index on Censorship Freedom of Expression Award for art, organised the ten-day #00Bienal de la Habana, which included over 170 artists, writers, musicians and theorists across nine different exhibitions in artists’ homes and studios around the country’s capital.

“Cuban culture is centralised culture and the government has absolute control,” Nuñez Leyva tells Index on Censorship. “The Ministry of Culture, together with all its branches such as the Union of Writers and Artists of Cuba and the National Council of Plastic Arts, are tentacles of the Ministry of the Interior, so all independent proposals, whether cultural, ecological or campaigns against gender violence, for example, are cursed with all the might of the government-controlled media.”

Even at schools pupils are served up propaganda intent on turning them against non-state-approved artists. Some art school students were shown a video portraying Otero Alcantara as a mercenary. “Such a campaign inevitably generates fear around independent projects which then suffer due to lack of both social and economic support,” Nuñez Leyva says. 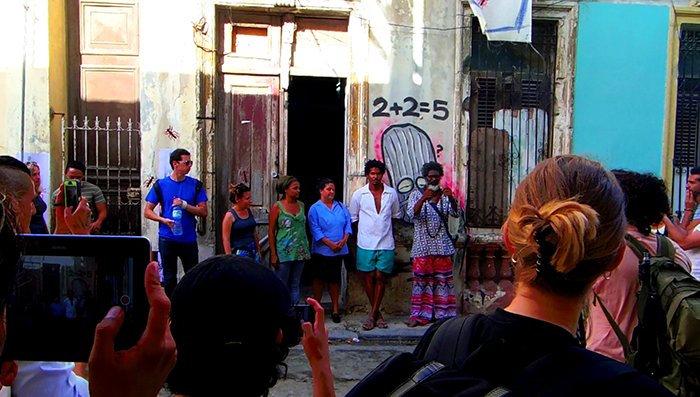 Economic support was one of the biggest obstacles for #00Bienal. “At the beginning, we thought that we would produce it with what we had at hand, but along the way we realised that we needed more,” Nuñez Leyva says. So a Gofundme campaign was set up, which raised $6,574. “But this wasn’t easy: the impact of the US blockade, our isolation from the world of networks and the impossibility of having credit cards made the process anguishing.”

Otero Alcantara was also imprisoned without cause on several occasions as part of the Cuban government’s campaign of harassment. Others who took part in #00Bienal, whether Cuban or foreign, received similar harassment. Many were even denied entry to the country, including the Cuban-American artist Coco Fusco.

When #00Biennial was announced in September 2017, the Cuban government immediately began to show its discontent through its cultural institutions. In an official declaration they branded the organisers as “unscrupulous people”. In response, #00Bienal’s first slogan was: “From the official to the unscrupulous.”

As culture is so tightly controlled in Cuba, only artists seen to be working in the interests of the regime can operate without restriction. Approved artists usually receive perks, something that gives them a higher status in society. Some artists risked all of this by taking part in #00Bienal. “The system used the worst blackmail against them because they gave the event a legitimacy that the government did not want,” Otero Alcantara says. “These artists were threatened by having their government accreditation taken away. Without this, they would find themselves without ‘official work’.” 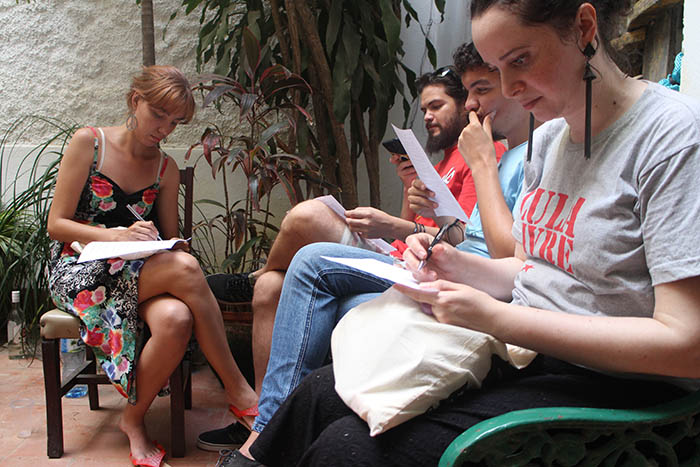 Government agents stalked the exhibitions while the organisers were accused of being in league with Cuba’s enemies. How does one respond to such accusations? “We responded by making an event that is as honest as possible, with a wide range of manifestations and artistic expressions that reflected the reality of Cuban art,” Nuñez Leyva says. “We responded with a list of more than 170 participants, not only Cubans, but from Mexico, Spain, Germany, the United States, Romania, Angola, Colombia, Denmark, Ukraine, Brazil, Venezuela, among them high-profile artists that Cuban institutions admire and collaborated with.”

The authorities even tried to prohibit the public from attending, sometimes successfully. Flyers and stickers were also confiscated. “But none of these actions were ever going to stop the energy of the event,” Otero Alcantara says.

“Despite all this pressure, the event went ahead, demonstrating that there is a group of people who are very courageous and have a real commitment culture,” Nuñez Leyva says. #00Bienal helped revive “a spirit of alternative rebellion” through the involvement of “countless numbers of totally unknown artists” that the state would never endorse.

For Otero Alcantara, the event’s success lies in the cohesion it created between artists, scholars and art enthusiasts, something that is unprecedented in the world of Cuban art. “We built an inclusive space of free creation and true collaboration between the people involved, exhibited the work of artists who were never going to have space in an official Havana Biennial and set a precedent for future projects,” he says. “This is one more step towards eliminating a fear that exists throughout Cuba.” 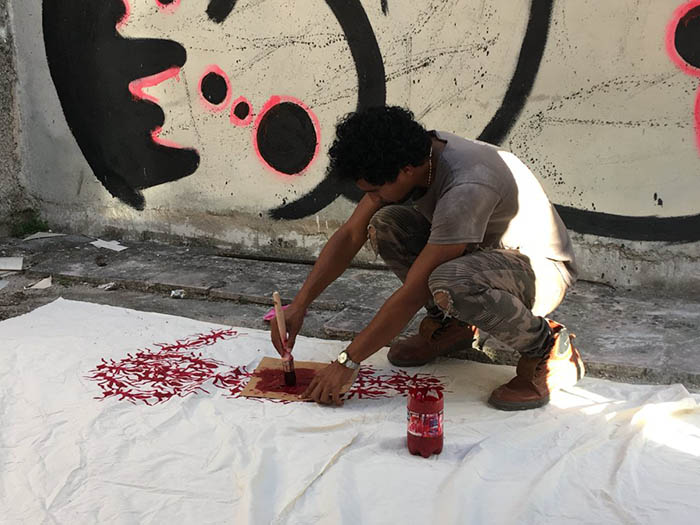 According to the organisers, the terms “revolution” or “revolutionary” have been hijacked and distorted by the Cuban regime. Such deformation has taken root so deep in the imagination of the Cuban people that just by mentioning the word “dissidence” is enough to be shunned, they explain.

“The #00Bienal was a humanistic project that brought to the fore essential values for any society such as unity, solidarity and collaboration,” Nuñez Leyva says. “The event also favoured the less privileged and created beauty and dialogue in favour of a new Cuba.”

The organisers of #00Bienal are under no illusions that life for Cuba’a dissident artists will magically become any easier under Cuba’s new president, Miguel Díaz‑Canel, who took over from Raúl Castro in April 2018. “The Cuban regime is more than any Castro,” Nuñez Leyva says. “It is a system based on a group of families that live both inside and outside the island, who have control over everything, which ultimately contributes to their own wealth.” This corrupt system relies on the deception of a people who have been left without even the strength even to protect themselves against poverty, she adds. “This situation leaves us with little hope, but we have to keep working.”

Otero Alcantara and Nuñez Leyva’s now want to show that #00Bienal wasn’t just a one-off, but is a serious project with longevity. “We will see if it is possible in two years to achieve something similar,” Otero Alcantara says.

Artists, writers, musicians and theorists who took part in #00Bienal 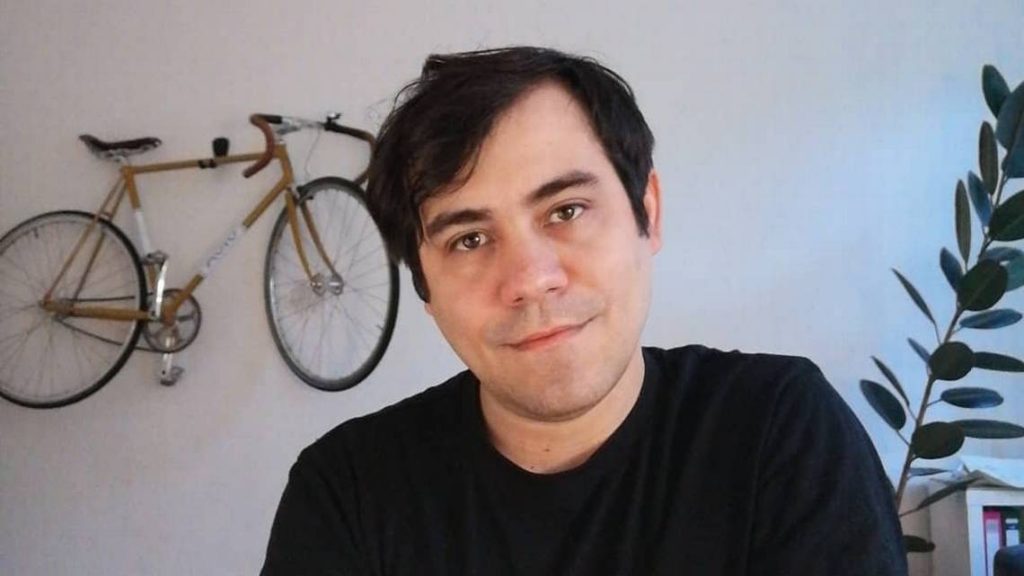