MAGAZINE
Testament to the power of theatre as rebellion

In a skyscraper in the heart of the City of London, a surprisingly airy rehearsal space hosts a group of Europe’s boldest theatre-makers.

In the centre of the room, a woman trudges in a circle with the juddering, formal rhythms of a fatigued sergeant-major, a vacuum-cleaner held out before her like a rifle. On the other side of the “stage”, an actor playing a surgeon is operating on a seemingly conscious patient.

Two stage-managers watch from the front: behind an otherwise conventional rehearsal table littered with sound equipment and notes, someone has hung the white-and-red flag, or byel-chyrvona-byely s’tsyah, which has become the emblem of Belarusian resistance to the dictator Alyaksandr Lukashenka.

I spot a souvenir water-bottle from the Human Rights Foundation’s Oslo Freedom Forum. On a small chair at the side of the room, a voice issues from a Zoom video running on a laptop. This is Nikolai Khalezin, founder with his wife Natalia Koliada of the Belarus Free Theatre company, directing a rehearsal over video link.

Today Khalezin is leading his company by Zoom because he seems to have a cold – and, in the time of Covid, no one can be too careful. But unlike most directors working in London, he has long practised in making theatre remotely. Since 2011, Khalezin and Koliada have held political asylum in the UK, a necessity for survival in the face of repeated harassment and imprisonment at the hands of Lukashenka’s regime. 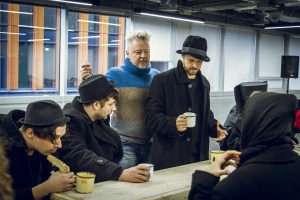 Khalezin was a journalist before he became a theatre-maker, working for three independent Belarusian newspapers successively closed as the autocracy tightened its grip. But in all the years in the UK, Khalezin and Koliada have never stopped co-ordinating their theatre company, keeping in close but covert contact with artists on the frontline of Belarusian resistance, who have risked their freedom and even their lives to perform “unregistered” theatre in garages and private homes around their homeland.

Long before the pandemic, directing his actors by video-link had become Khalezin’s norm. Now, given the vicious repression which followed Lukashenka’s attempt to assert himself in August 2020 as the “winner” of a sixth term as president, the rest of the 16-member Belarus Free Theatre, and their families, have fled their native land to reunite in London.

Ostensibly, the artists of the Belarus Free Theatre are now refugees. “What can foundations and activists in the West specifically do to help?” I ask Khalezin, perhaps naively.

“What can you do to help? Imagine 20 people arriving in a new country without a roof, without spare clothes, with nowhere to go – then it becomes quite easy to picture what you can do to help.”

But they are also rehearsing in London as prestigious invited artists, programmed to premiere their latest production at the Barbican Centre in March 2022. Dogs of Europe, first performed in an early version in Minsk in 2019 – crowds of supporters turned up in spite of the fear of arrest – is an adaptation of Alhierd Bacharevic’s mammoth novel set in a dystopic Europe of 2049.

In the book, most of Asia has fallen under a secret-service dominated Russian “reich”, while an ever more fragmented western Europe grapples with a refugee crisis. The title seems to recall W H Auden’s poem on the death of Yeats: “In the nightmare of the dark / All the dogs of Europe bark / And the living nations wait / Each sequestered in its hate.”

The novel was published in 2017, but as a long-term collaborator of Bacharevic, Khalezin first saw a version in 2014 – since then, he says, “it has become closer to our contemporary world even quicker than I had imagined.” He is still working on condensing Bacharevic’s 900 pages into a 150 minute show and on scaling up his company’s flexible rehearsal versions to fit the Barbican Theatre’s 1,162-seat main space.

Not that the Belarus Free Theatre’s audiences have ever been small. Part of the problem of performing for years in secret scratch locations around Minsk has always been the sheer number of people who regularly turn up, hungry for intellectual immediacy. The level of direct intervention by Lukashenka’s thugs has varied on and off – part of any surveillance state’s strategy is always to fuel uncertainty and surprise – but in 2007, for example, the entire company were arrested in the middle of a performance of Edward Bond’s Eleven Vests.

Ironically, Bond’s play for young people explores the abuse of liberty by state institutions, both school and army – the arrests came within three weeks of a summit on political liberty in eastern Europe at which Vaclav Havel had hosted the Belarus Free Theatre at his country home in the Czech Republic.

Theatre on the streets

With the eruption of protests in 2020, however, the theatre company found themselves performing on open streets. “Minsk is full of courtyards,” says Svetlana Sugako, the company’s general manager. “We went on to the streets, and so did everybody else, so there we were, performing to the crowds of protesters, and they were performing back in the form of their protest.”

Sugako discovered the Belarus Free Theatre in 2007, after being taken by a friend to a bar and rolling her eyes at the mere concept of theatre. “I had only seen the official, patriotic stuff – the state produces these long shows of official history and calls it theatre.”

Inside, the company were performing their internationally acclaimed version of Sarah Kane’s 4.48 Psychosis. “It was about suicide, and psychosis, and pain – and the government doesn’t allow us to have plays which show this, because we are supposed to be a perfect society, so officially we don’t have suicide, we don’t have psychosis, we don’t have pain. And it was right up in my face, performed at the bar, just like I’m talking to you now.”

Sugako immediately got involved. Shortly afterwards she was arrested with the group, and when I look at accounts of her imprisonment she has given elsewhere, I read harrowing stories about being humiliated while naked, and forced to listen to male prisoners being raped with objects in the next room. So I don’t press her. But she alludes to that particular stint in prison later in our conversation, when she talks about the experiences of being detained again last year in the aftermath of Lukashenka’s crushing of the courtyard protests.

‘‘It was bad before. But even compared to that first time, now it is hell. There are no human rights outside prison. So imagine what happens inside.”

There are still more than 600 political prisoners in Belarus (Lukashenka, in a recent interview with the BBC, called them “criminals”.) The Belarus Free Theatre have been working with Index on Censorship to smuggle letters from prison and publish them on the Index website as Letters from Lukashenka’s Prisoners.

What feels frustrating, observing the Belarus Free Theatre’s development, is how many times it seems to have dropped from the Western radar over the past few years. Ten years ago, they were a liberal cause célèbre – I first encountered their work at an event at the Young Vic in London hosted by Index on Censorship in 2010, which seemed to have every progressive theatre luminary in attendance.

Many friends have stood firm, including the actor Samuel West and the playwright Sir Tom Stoppard, who also has a long-standing relationship with Index. But often, attention seems to flicker fashionably. Khalezin attributes this in part to the sheer wave of people in crisis globally: “You have people in need from Afghanistan, you have people from Syria – we shouldn’t be competing with each other for help, but our stories should all be reason to look beyond your borders, to build more bridges.”

Most of the company – all of whom have hair-raising tales about escaping Belarus – are likely to be based in Poland for the foreseeable future, partly because living in London is more expensive.

Conversely, the infectiously hopeful aspect of the Belarus Free Theatre is its unfettered advertisement for the power of theatre as rebellion. Critical conversations about art as freedom of expression inevitably revolve around the naysayers’ question: “yes, but does it actually change anything?”

For 15 years, Khalezin and Koliada have been bringing people together in a nation whose government goes to extreme lengths to keep people apart. Theatre is shared experience – this much we know – and one of the markers of Lukashenka’s regime is his attempt to deny citizens shared experience.

In October 2020, during the height of the election protests, people were forbidden from gathering in public places in groups of more than three and private gatherings were banned outright. (This supposedly was a health measure – but, as Sugako observes, “Belarus has no coronavirus. Officially. We are a perfect country, remember?”).

Whether gathering people in private spaces, or engaging inquiring minds at a public protest, the Belarus Free Theatre brings people together. And when people come together, things begin to happen. 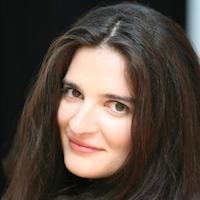 Kate Maltby
Kate Maltby is the deputy chair of the Index on Censorship Board of Trustees. She is a critic, columnist, and scholar