As a woman and a journalist, I have been living my worst nightmare since 15 August 2021, the day the Afghan capital, Kabul, fell to the Taliban. Since that Sunday, I have been reporting about what women have lost – and what they continue to lose – as the new regime expands its power.

The Taliban have limited every aspect of women’s lives, from banning them from school and work to introducing long black uniforms that cover them from head to toe. Having grown up in Kabul since 2001, when the Taliban were deposed, I never imagined a return to the days when women were forced to stay home because of their gender.

When I was working as a journalist based in Kabul between 2011 and 2017, the media was the last hope for dissidents. Now the media, which continue to expose wrongdoing, have turned into dissidents. Today, making an editorial decision in Taliban-controlled Afghanistan is literally making a decision about life and death.

In our small newsroom at Rukhshana Media, an all-women news website, one recurrent concern is how to tell a story with minimum risk to the people involved. The journalist is often the first to face the consequences of his or her work.

Journalism under the Taliban

Afghanistan has never been a safe country for journalists but, after 2001, the nascent Afghan media were freer than media in neighbouring countries.

Now they can hardly function without getting visits and calls from the new rulers in charge – the group that labelled the media a military target and continued to threaten them before coming to power in mid-August.

Media outlets are closing and journalists are being arrested, tortured and being forced to go on the run.

On 14 August, the day before Kabul fell, Mujeeb Khalwatgar, executive director of the Afghan media advocacy group Nai, told me his organisation had heard from journalists in Baghlan, Kandahar and Herat provinces that the Taliban were searching for them.

The same day, I talked to a young journalist from the north-eastern province of Badakhshan who said his name was on the Taliban’s blacklist. He was hiding outside Fayzabad, the provincial capital.

Days before the Taliban took Fayzabad, one of his female colleagues was attacked by a man who covered his face. She survived the attack, but they were worried whether they could survive the new regime.

I talked to several women reporters from the provinces who sought shelter in Kabul as the Taliban took over, hoping to leave the country on evacuation flights. Many of them didn’t make it.

In early November, a 24-year-old-woman, one of only three female journalists in an entire province – who asked me not to name the province – said she was on a Taliban blacklist, according to a relative who was working with the militants. The radio station she worked for was among more than 150 media outlets forced to close because of Taliban-imposed restrictions and the economic crisis a month after Kabul fell.

As the breadwinner of a family of nine, the change in rulers meant she not only lost her job but is on the run for her life, simply for being a woman journalist. In the past two months, she has been forced to change her place of residence seven times to hide from the Taliban. 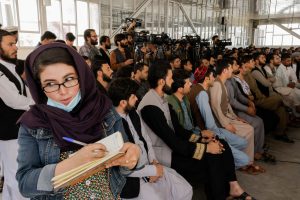 Two weeks after the Taliban’s return to power, Reporters Without Borders warned that “women journalists are in the process of disappearing from the capital”. The organisation noted that, of about 700 women journalists with jobs in Kabul, more than 600 had not returned to work. Some fled while others were forced to stay at home or go into hiding.

Our investigation at Rukhshana Media shows that there are no women journalists in radio or TV working in the western provinces of Herat, Farah, Badghis and Ghor.

The systematic removal of women from the media landscape is not the only immediate consequence of the Taliban’s return to power. Just three weeks after their takeover, the militants arrested 14 journalists, with at least nine of them subjected to violence during their detention, according to the Committee to Protect Journalists. Among those detained were an editor and four other journalists at Etilaat Roz, a newspaper that was a winner of Transparency International’s Anti-Corruption Award in 2020. Two of them were tortured by the Taliban and needed hospital treatment.

Today, journalists – both men and women – are still on the run. In November, I talked to a 31-year-old journalist who for the past eight years has been an investigative reporter for local print and online outlets. Since 15 August, he has been on the run with his family of four, having spent nights in five different places. He is particularly worried about his investigations into the Taliban-run religious schools.

“No one is listening to my calls for help, no one. I am just hoping the Taliban don’t catch me alive,” he said.

Reporters Without Borders and Human Rights Watch have issued warnings about the Taliban censorship of media, especially their “media regulations” which require journalists and media not to produce content “contrary to Islam” and not to report on “matters that have not been confirmed by officials”.

The chief editor of a radio station in Kabul who, despite not having a passport, attempted (unsuccessfully) to get on an evacuation flight out of the country in late August, told me his story. Now he is back at work, where, in one month, the Taliban have visited his office four times. Twice when his colleagues used the word “Taliban” instead of “the Islamic Emirate”, he received calls warning him to be careful with the choice of words.

He says his radio station, like all other Afghan media outlets, is under the Taliban’s scrutiny. Three of his colleagues in other provinces have been ordered by provincial officials to send their news first to the Taliban before it is signed off for broadcast.

With reliable sources of information having dried up and journalists either on the run or operating in an environment of fear, censorship and self-censorship, it is becoming harder to be a journalist.

The new environment creates opportunities for the circulation of false stories and propaganda on social media. Lately, it has become difficult to distinguish between real news and propaganda. Many on social media, including some journalists, are propagating stories that correspond with their biases and social and political prejudices which then will be used by some international media to verify their own assumptions and biases.

Exposing false and misleading stories has been one of the primary goals of our team at Rukhshana Media, where we investigated two stories directly connected to misinformation and staged reporting in the past two months.

Many news outlets reported that Mahjabin Hakimi, a 25-year-old professional volleyball player, was beheaded by the Taliban. The reports were based entirely on the claim of her coach in Kabul’s volleyball club who spoke under a pseudonym. But our investigation, in which we interviewed five sources, including her parents and a friend who was present the day her body was found, showed that she died on 6 August – nine days before the Taliban took over Kabul.

In the second story, several people connected to the family of a nine-year-old girl featured in CNN’s bombshell report on child marriage told Rukhshana Media the report was invented.

Our reporters are working on the ground to bring women’s stories to the surface of a male-dominated Afghan media. In the past months, we have partnered with two international newsrooms, The Guardian and The Fuller Project, which has helped amplify the voice of Afghan women to wider audiences outside the country.

With women journalists remaining at risk, we are trying to create opportunities for them to continue their work and tell the stories of women in Taliban-ruled Afghanistan, where they are banned from work and education and have no idea when they will be able to return to public life. 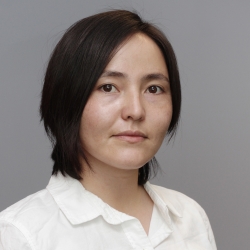