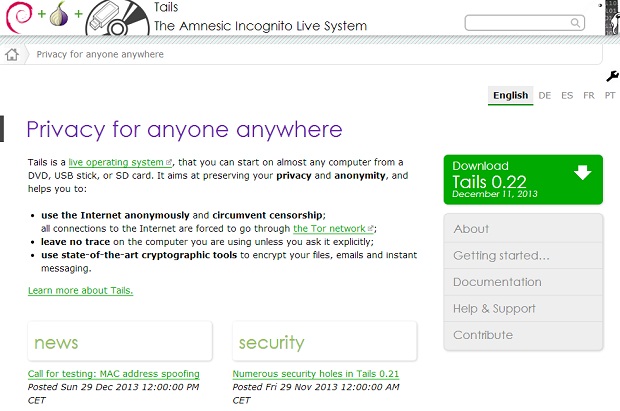 The Incognoto Amnesiac Live Operating System (TAILS) is an open-source encryption tool that can help protect the free online communication of journalists and sources in any country, regardless of official limits on free expression.

Tails was developed by a global network of individuals, working in international obscurity, united in their dedication to protecting the security of computer users. This is a vital service to journalists and activists working in the NSA era and closed societies, where authorities rely heavily on censorship and tracking of online activity to clamp down on dissent.

Tails is an operating system, much like Windows and Mac OS, and can be used by anyone, anywhere, without having to have substantial technical knowledge. A member of the anonymous group behind the creation of Tails  spoke with Alice Kirkland about their nomination and why online security is not just a requirement for journalists and hackers.

Index: How does it feel to be nominated for the Index on Censorship digital activism award and why do you think Tails was nominated?

Tails: It is an honour to be on the list of nominees. Especially after all that happened this year! We find it interesting to see a free software project in such a list. I think Tails was nominated because we are the safest operating system available for online anonymity and digital activists. This was even acknowledged by the NSA itself.

Index: What is the importance of internet security and how has this changed over recent months?

Tails: The fact is that in our modern world our communications are inevitably more and more mediated by digital technologies. On the other hand, the characteristics of digital communications as well as the way the internet is built create a very interesting challenge: it is relatively easy to spy on people on the internet, but it is also relatively easy to defeat this spying by using the right techniques.

I don’t think that the nature or the role of internet security changed over the recent months. The recent Snowden revelations only confirm the assumptions on which our work is based. What really changed is the public awareness regarding those issues. It is now hard to deny that internet security has to do with politics and not only with technology.

Index: Do you think journalists should have access to different online security options than the general public?

Tails: I don’t think so. We all need efficient tools to protect our communications online whether you are a journalist, an activist, a hacker, or a layperson. Recent events, from the Snowden revelations to the Arab Spring, proved that the boundaries between those roles are actually being challenged by the way people use the internet.

Furthermore, from a more technical point of view, anonymity tools like Tor need a wide range of users in order to protect the anonymity of every one of them. Tor is being used equally by dissident bloggers, privacy concerned citizens, whistleblowers, businesses, victims of intimate partner abuse, and even military and law enforcement agencies.

Index: What was the thought process behind Tails and how has the software evolved over time?

Tails: The first version of Tails announced on our website dates back from June 23, 2009. Our vision was to create a toolbox for computer security that would be easy to use and hard to misuse. The challenge was to combine very good security by default while being accessible to a large public.

Since then, we released 34 versions of Tails and we have been really successful. In 2013, our approximate number of users was multiplied by 2.5. Today, someone is starting Tails every 10 seconds somewhere in the world.

Just to give an example, all connections to the internet are forced to go through the Tor network without having to configure anything. I think that we share the same target audience as the people who are using the Tor network.

The main function of tails is to hide the location of internet users.

Index: What other features does Tails have for its users?

Tails: For us online anonymity is only one of the major aspects of Tails:

– Online anonymity. All connections to the Internet are forced to go through Tor or I2P, which is the second anonymity network available in Tails.

– Amnesia. Tails runs from a DVD or USB stick and by default leaves no trace on the computer that you are using. This allows you to use Tails almost anywhere and also prevents you from leaving traces of sensitive data on computers.

– Cryptography toolbox. Tails provides a selection of state-of-the-art cryptographic tools to encrypt your files, emails and instant messaging, selected for their security features and ease of use.

Index: What role does freedom of expression have to play in the debate surrounding online privacy and where do you see the future of this?

Tails: Tools such as Tails or Tor relate to both online privacy (private communications), and freedom of expression (opinions expressed publicly). For example, Tails can be vital to both an activist writing a dissident blog, and a victim of intimate partner abuse communicating with her lawyer. In this case, the actual technology used to protect both freedom of expression and privacy on the internet is the same.

Still, the recent leaks proved that freedom of expression is a central mechanism in bringing those issues to the public debate and making clear they are political issues, and not merely technical issues.

Index: Online privacy and the NSA received a lot of media coverage over the past year. Would Tails have come about if it wasn’t for the likes of WikiLeaks & Edward Snowden?

Tails: As our record of releases proves, Tails existed before the NSA leaks, and even before the major WikiLeaks releases in 2010. I think that in this recent history, the tools and the way they are being used have a symbiotic relationship. Recent whistleblowers probably used online security tools such as Tor and Tails. In turn, the consequent media coverage and public interest provides us with a social context that is positive for the further development of our tools.