Index has looked at the countries taking part in arguably the biggest show on earth, and put together our own group of death -- the freedom of expression edition

The 2014 World Cup in Brazil starts today, 32 nations preparing to battle it out across eight groups in the first stage of the tournament.

This year’s competition, like so many before it, comes with its designated group of death. For those not familiar with the lingo, it means the group containing the highest amount of strong teams. Or even more simply put, the group most difficult to progress from. (You can’t accuse the beautiful game of holding back on the melodrama).

Index has looked at the countries taking part in arguably the biggest show on earth, and put together our own group of death — the freedom of expression edition. 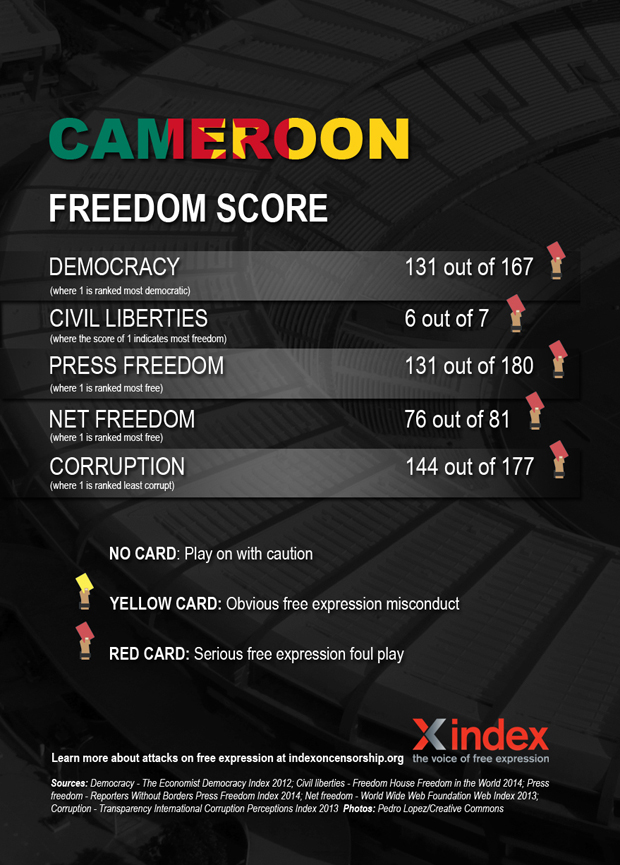 Cameroon — or the Indomitable Lions — have a solid track record in qualifying for the World Cup, having taken part seven time, more than any other African side. There were also the first African team to make it to the quarter final and are responsible for one of the most iconic moments in the tournament’s history. Their track record on free speech, however, is less impressive.

Freedom of expression is guaranteed in Cameroon’s constitution. Despite this, the government of Paul Biya — the country’s leader since 1982 — has been been accused numerous violations of free expression.

Large parts of the press are biased towards the ruling elite, while critical journalists face detainment, harassment and demands to reveal sources, among other things. Self censorship is widespread. In September 2013, 11 press outlets, including newspapers, radio stations and a TV station, were shut down for disrespecting “ethics and professional norms”. In 2010, former newspaper editor Germain Ngota, who had been investigating corruption allegations involving the state-run oil company, died in jail.

Freedom of assembly is often cracked down on. In 2012, former opposition presidential candidate Vincent-Sosthène Fouda and others were charged with “holding an unlawful demonstration”. The same year, security forces used tear against a crowd gathered to protest against Biya. In 2008, around 100 people were killed in clashes with police in anti-government riots.

Arts are not spared either. In 2013, Jean-Pierre Bekolo’s film Le President was banned in Cameroon because it discussed the end of Biya’s reign . In 2008, Lapiro de Mbanga, who criticised the constitutional change in term times that would allow Biya to stay in powers through song, was arrested.

Homosexuality is outlawed, and punishable by up to 14 years in prison. Human rights violations against LGBTI people, or those perceived to be, are “commonplace”. In July 2013, Eric Ohena Lembembe, director of the Cameroonian Foundation for AIDS (CAMFAIDS) was brutally murdered, in what friends suspect was an attack based on his pro-LGBTI advocacy. 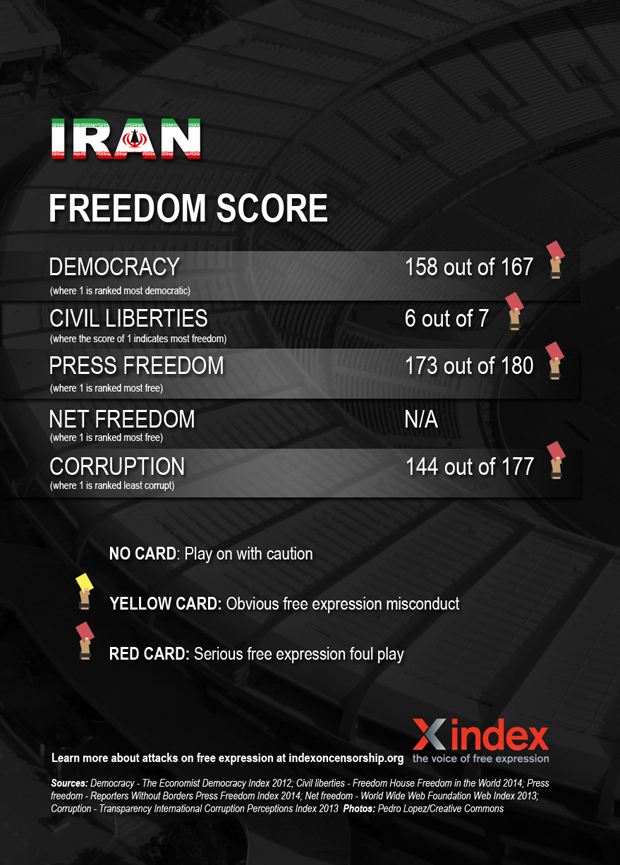 Team Melli will hope that their fourth appearance at the World Cup will see them progress from the group stages for the first time. When he was elected almost a year ago, there was hope that President Hassan Rouhani would be a progressive force within Iran. The results so far have been mixed.

Since coming into power, Rouhani has taken some steps to improve press freedom, such as withdrawing 50 motions against journalists, and lifting some restrictions on previously banned topics. However, the government still controls all TV and radio, and censorship and self-censorship is widespread. The latest figures put the number of jailed journalists in Iran at 35. In January 2013, a group of journalists were arrested for allegedly cooperating with “anti revolutionary” news outlets abroad. Journalists’ associations and civil society organisations that support freedom of expression have also been targeted.

The internet and social media played a significant part in publicising and documenting the protests that followed the 2009 election, which many Iranians believed was fraudulent. The regime has banned Facebook, YouTube, Twitter and, recently, Instagram. The lead-up to the 2013 elections saw Iranian leaders tightening access to the web, and silencing “negative” news. While Rouhani — seemingly an avid Twitter user — has indicated plans to relax web censorship, the country’s plans to launch a “national internet” are said to be going ahead.

In May, eight people were jailed on charges including blasphemy, propaganda against the ruling system, spreading lies insulting the country’s supreme leader Ayatollah Ali Khamenei on Facebook. Recently, a group of young people were arrested over a video posted of them singing and dancing along to the song “Happy”, which police called was a “vulgar clip” that had “hurt public chastity”. Some commentators believe the move was meant to intimidate Iranians and discourage online criticism. 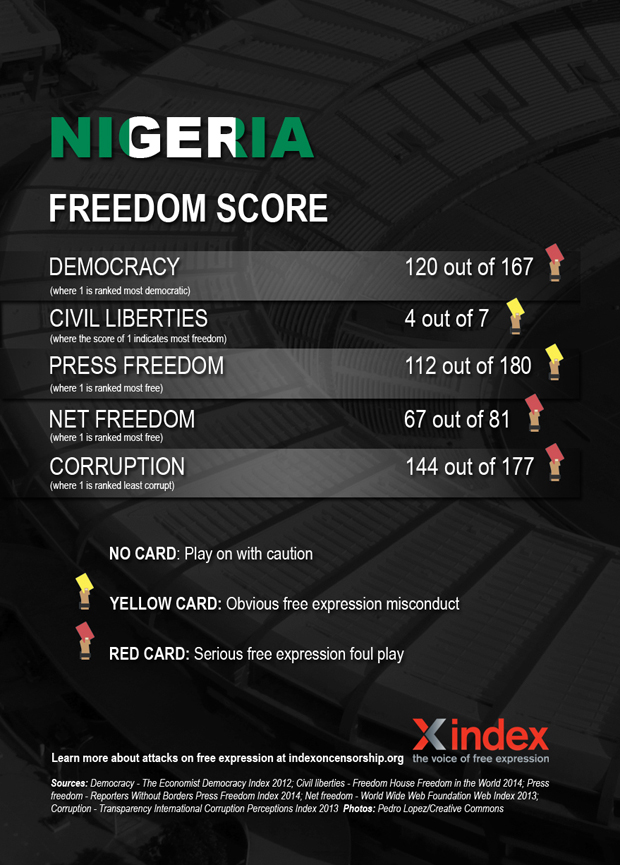 Brazil 2014 marks 20 years since Nigeria’s first outing at the World Cup, and the Super Eagles arrive at the tournament as reigning Africa Cup of Nations champions. The country’s leadership, however, is not a champion of free expression.

While parts of Nigerian media is controlled by people directly involved in politics, the country can also boast a lively independent media sector. However, journalists, especially those covering sensitive topics such as corruption or separatist and communal violence still face threats. Journalists have been arrested by security forces, and media outlets have been attacked by terrorists. Legal provisions such as sedition and criminal defamation also challenge press freedom. In 2011, a journalist was arrested over stories detailing alleged corruption in the Nigerian Football Federation.

The country’s freedom of information act was put in place in 2011. However, when human rights lawyer Rommy Mom tried to use the legislation to trace some 500 million of missing aid money allocated to his flood ravaged home state of Benue, he was met with threats from people connected to the state governor, and was forced to flee.

The Same Sex Marriage Prohibition Act 2013 outlawing gay marriage and relationships, was signed into law by President Goodluck Jonathan in January. The unpublished law makes it illegal for gay people to hold meetings, and outlaws the registration of homosexual clubs, organisations and associations. Those found to be participating in such acts face up to 14 years in jail.

Nigeria has come under international attention in recent months for abduction of the Chibok school girls by terrorist group Boko Haram. Among other things, Nigerians responded with the powerful #BringBackOurGirls campaign. In June however, authorities seemed to ban an offline protest against the kidnappings, before quickly backtracking. It is also worth noting that the Nigerian government has targeted journalists in their “war on terror”. 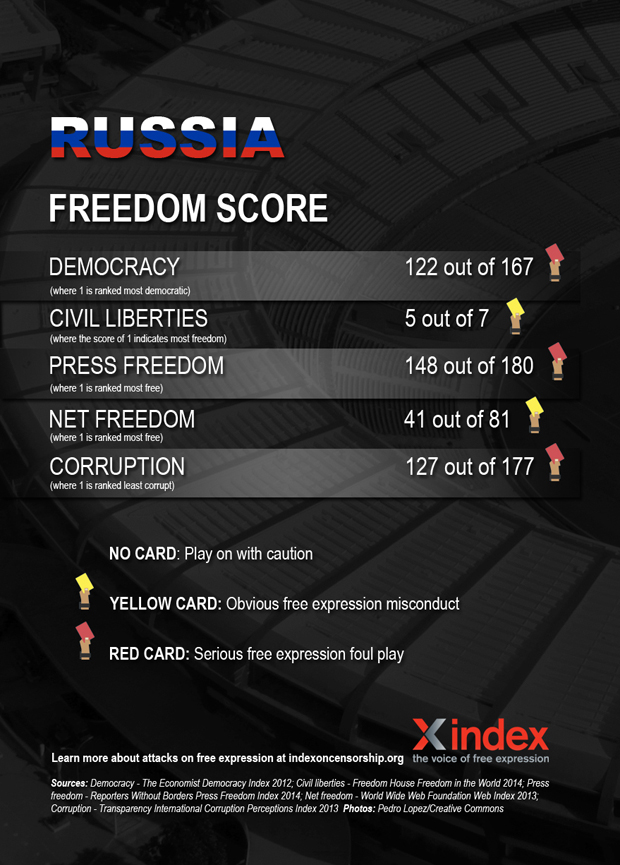 Team Sbornaya travel to Brazil in the knowledge that next time in the World Cup rolls around, they will be playing on home soil. Russia of course, recently hosted another international sporting event — the 2014 Winter Olympics. However, global attention did not improve the country’s poor record on freedom of expression. In fact, experts predicted a rise in censorship ahead of the Olympics.

Press freedom has long been under attack by Russian authorities, with TV news currently providing little beyond the official government line. In the last few months, the relatively well-respected TV channel RIA Novosti was liquidated following a decree by President Vladimir Putin, and replaced by a new press agency headed by a Kremlin-loyalist. In January, Dozhd, a popular independent TV channel was dropped by satellite and cable operators over a controversial survey. For the remaining critical journalists, Russia — one of the countries with the highest number of unpunished journalist murders — is a dangerous place to work.

The crackdown on the internet is widely believed to have started with the protests surrounding the elections securing Putin’s third term in power, organised partly through social media, but it has recently intensified. The Duma has adopted controversial amendments to an information law, targeting bloggers with blocking and fines for anything from failing to verify information posted, to using curse words. Also recently, the founder of “Russian Facebook” VKontakte says he was forced out, with the son of the head of Russia’s largest state-run media corporation predicted to take over as CEO. In 2013, the Duma approved legislation allowing immediate blocking of websites featuring content deemed “extremist”.

Public protests are discouraged through forceful responses by police, arrests, harsh fines and prison sentences. The country’s recent anti-gay legislation also pose a big threat to free expression and assembly. The ban on “promotion” of gay relationships, means that any form of expression deemed to be “gay propaganda” can be shut down. The law has also lead to physical attacks on Russia’s LGBT population.

An earlier version of this article stated that Brazil 2014 marks ten years since Nigeria’s first outing at the World Cup. This has been corrected.

One response to “Group of death: The worst World Cup countries for free expression”