A Kenyan woman standing up for women’s rights in one of the world’s most dangerous regions. A Hungarian journalist and his investigative news site. A documentary filmmaker who exposed an unreported uprising in Saudi Arabia. An Angolan journalist who has been repeatedly prosecuted for his work uncovering government and industry corruption. A Moroccan rapper whose music tackles widespread poverty and endemic government corruption.

These were the five individuals named Index on Censorship Freedom of Expression Award winners on 18 March 2015. Three months later, here are updates on their ongoing work. 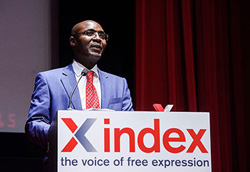 The campaigning journalist returned from collecting his award in London to face trial linked to his book Blood Diamonds. He filed a criminal complaint against a group of generals who he held morally responsible for human rights abuses he uncovered within the country’s diamond trade. For this, they filed a series of libel suits against him in Angola and Portugal.

The media attention that Marques won off the back of his award “helped a great deal” he said. “It raised my profile in the days before my trial and maybe helped to make it an international cause.” In a rare sight for Angola, a number of anti-corruption protesters publicly gathered outside of the Luanda courthouse as his trial opened and covert protests have continued under the cover of darkness since.

Marques’ trial played out in a Kafkaesque way over the subsequent weeks, with behind-the-scenes negotiations leading to criminal defamation charges first being dropped, only for him to suddenly discover that he would instead be sentenced for the alternative crime of malicious prosecution.

The American Bar Association, who monitored the trial throughout, published a report stating that the court had failed to meet international fair trial standards on at least three counts. The ABA Center for Human Rights report found that “throughout the proceedings, the defendant was denied the right to present a defense, induced to make a statement on the basis of false pretenses and compelled to bear the burden of proving his innocence, all in violation of international law.”

Marques’ sentence finally came down on 25 May: six-months imprisonment, suspended for a term of two years. Marques is now appealing against this punishment that effectively seeks to silence him until 2017; coincidentally the same year as Angola’s next elections.

The court also attempted to censor Marques’ book from republication and further distribution but these efforts have blatantly failed with copies of the book widely circulated online and an English language version becoming available for the first time less than a week after his sentence.

Despite the international attention, the situation for Marques and his peers in Angola’s human rights and journalism communities remains grim. Recounting the experience of taking his car to the local garage for repairs recently, the fear is palpable in his voice. “There were two members of the ruling party there, by coincidence. They walked across to the mechanic and warned him not to fix my car unless he wanted to risk becoming collateral damage.”

Marques’ email has also recently been repeatedly hacked and his website www.makaangola.org is presently subject to over 250 attacks per day, forcing him to desist from updating it for the time being.

Marques continues to work closely with Index on Censorship and a number of other international organisations. His recent report on the massacre of a sect at Mount Sumi was published by The Guardian, he continues to keep a close eye on both the persecution of journalists and corruption at the highest levels in Angola, and he is expecting to hear back from the Supreme Court about his appeal in the next few weeks.

Hugely grateful for the support of the international community, Marques remains determined “to continue the good fight for change”.

“I have only the interests of my people at heart,” he says, “and to experience all this persecution, it must mean you are doing something positive, something right.” 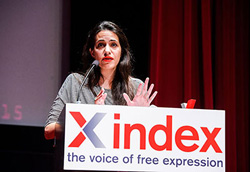 Joint winner of the Index on Censorship Freedom of Expression Award for Journalism, Safa Al Ahmad has spent much of the past three months in the editing studio.

Applauded for her documentary Saudi’s Secret Uprising, Al Ahmad’s new film The Rise of the Houthis – first distributed at this year’s Index on Censorship Freedom of Expression Awards Gala and since screened by both the BBC and PBS Frontline – has won wide critical acclaim.

In it, Al Ahmad gained extraordinary access to tell the story of the rise of a rebel group from the north of Yemen who have taken over control of the capital Sana’a and drastically changed the country’s political landscape.

Next month, on 6 July, BBC worldwide will also premiere a follow-up film that Al Ahmad has produced and directed, with Gaith Abdulahad exploring the present situation in the south of Yemen.

Now regularly invited to attend international public meetings, from Copenhagen to Geneva to Washington DC, Al Ahmad says she thinks that the award has brought more exposure – both for credible investigative journalism from Saudi Arabia, and for her work.

Is that a good thing for a journalist who has made her name through operating undercover? It is a challenge, she says, to find ways to do credible journalism about Saudi Arabia and the region without being on the ground. But there are complex stories, beyond TV, that Al Ahmad would increasingly like to focus on. 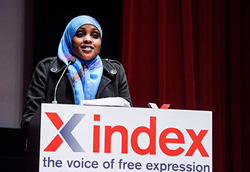 Abdundi, who knows many students from the college, immediately joined with other women leaders to organise strong community protests against Al-Shabaab.

“It was a barbaric attack done by a crazy group who have no respect for human life,” she said. “It was a sad day for the people of Kenya and the victims of the attack. But it will not scare [the] people of northern Kenya as we will continue and fight to overcome them”.

Abdundi hopes to help further through her ongoing work with her grassroots community organisation Frontier Indigenous Rights Network, tracking arms movements across the dangerous border with Sudan and travelling to meetings in Nairobi to report observations. “Security is improving now,” says Abdundi.

Winning the Index on Censorship Freedom of Expression Award for Campaigning, and sharing the story of the people of northern Kenya with the wider world, “made me so happy” she says. “The award ceremony was aired by all community radios in northern Kenya and reached many people. I am happy because it will give women courage to stand up for their rights”.

Spending a week in Index on Censorship’s office in London was “an opportunity to see how you work” Abdundi said, and has inspired her to want to develop a new website for her work, helping her to “spread her message to all corner[s] of northern Kenya”. 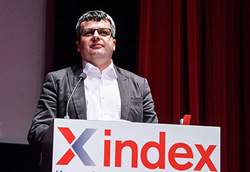 Atlatszo.hu, Tamas Bodoky’s investigative news website in Hungary has continued to gather praise and acclaim, including another award, the Theodor Heuss Medal.

“All of this recognition is very helpful,” said Bodoky. “We are always afraid of retaliation and this offers us a level of protection… Hungarian authorities are very aware of this international attention and it is less likely that they will attack as we continue with our investigative projects.”

Atlatszo continues to publish three to four articles and numerous blog posts each week, including an English newsletter, often drawing on FOI requests to try to bring more transparency to Hungarian public life.

Other recent work “the hammer of the village series” is on local municipalities and the public procurement process, with Bodoky seeking to tackle the “local state capture situation” whereby connections between elected council members and big business are “worrying”. And there are Atlatszo’s ongoing investigations into the spending of European funds. “We have to be a watchdog” says Bodoky.

As he looks ahead, Bodoky is especially concerned by the looming threat of a foreign NGO law – holding all NGO’s with foreign funding “accountable and transparent” by forcing them to register.

“We don’t know exactly when they will seek to expose and limit foreign funding, but the Russian recipe is definitely on the table,” says Bodoky. Fortunately his organisation has been totally open and transparent since 2013. 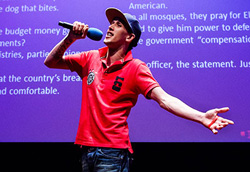 Rapper Mouad Belghouat, better known as El Haqed (“the enraged” in Arabic) continues to rail against the endemic corruption and widespread poverty he says he sees in Morocco.

Imprisoned three times since 2011, El Haqed was not only prohibited from performing publicly in his homeland but had also been struggling to obtain visas to travel or perform internationally.

The good news is that his visit to the UK has helped him to overcome this obstacle, recently spending five weeks touring Norway, Sweden and Denmark. Highlights included performing live during Oslo’s 1 May celebrations and working with the organisation Freemuse to record a new Fela Kuti cover as part of a group of Arab and Iranian revolutionary artists (listen here). “It was much easier to be there because I went to England and came back,” said Belghouat.

Until recently limited to publishing and sharing his work via YouTube and Facebook, El Haqed has also begun something of an offline resurgence back home. Approached by promoters in his home town of Casablanca after winning the Index on Censorship Freedom of Expression Arts Award brought him widespread local media coverage, El Haqed now hopes to stage his first live concert on home soil in a long time this Friday 19 June. (Update 22 June 2015: Morocco: Police block concert by Index award-winning rapper El Haqed)

“Usually people find many excuses not to work with him,” according to Belghouat’s brother and manager Abderrahim Belghouat, “but so far this time no people have yet come and told the venue ‘don’t work with him’…”

Update 23 June 2015: El Haqed has now cancelled his planned tour of five of Morocco’s least affluent towns. The planned series of concerts would have teamed El Haqed with six other local musicians to “bring joy to poorer people in cities without theatres, cinemas and cultural areas, in the old Moroccan way, by making music for free outdoors”.

El Haqed is determinedly hopeful, “the Index award has shown Moroccan authorities that you can’t stop me,” he said, “the more of an effort they make to silence me, the more my voice arrives everywhere.”

• Index announces winners of 15th annual Freedom of Expression Awards
• Rafael Marques de Morais: I believe in the power of solidarity
• Amran Abdundi: This award is for the marginalised women of northern Kenya
• El Haqed: I will fight for freedom, equality and human rights for ever
• Tamas Bodoky: The independence of journalism in Hungary is under threat
• Special Index Freedom of Expression Award given to persecuted Azerbaijani activists and journalists
• Video: Comedian Shappi Khorsandi hosts Index on Censorship awards
• Drawing pressure: Cartoonists react to threats to free speech