As refugees flee one of the world’s most repressive and secretive regimes, Ismail Einashe talks to Eritreans who have reached the UK but who still worry about the risks of speaking out 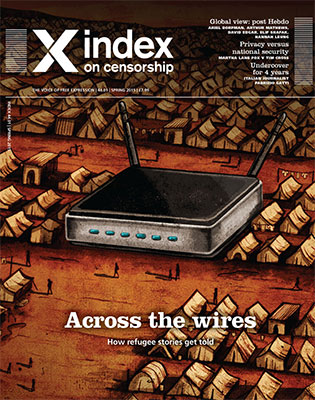 This article is part of the spring 2014 issue of Index on Censorship magazine. Click here to subscribe to the magazine.

In conjunction with the Cambridge Festival of Ideas 2015, we will be publishing a series of articles that complement many of the upcoming debates and discussions. We are offering these articles from Index on Censorship magazine for free (normally they are held within our paid-for archive) as part of our partnership with the festival. Below is and article by Ismail Einashe on television journalist Temesghan Debesai’s escape from Eritrea, taken from the spring 2014 issue. This article is a great starting point for those planning to attend the A New Home: Asylum, Immigration and Exile in Today’s Britain session at the festival.

Television journalist Temesghen Debesai had waited years for an opportunity to make his escape, so when the Eritrean ministry of information sent him on a journalism training course in Bahrain he was delighted, but fearful too. On arrival in Bahrain, he quietly evaded the state officials who were following him and got in touch with Reporters Sans Frontières. Shortly after he met officials from the United Nations High Commissioner for Refugees who verified his details. He then went into hiding for two months so the Eritrean officials in Bahrain could not catch up with him and eventually escaped to Britain.

Debesai told no one of his plans, not even his family. He was concerned he was being watched. He says a “state of paranoia was everywhere” and there was no freedom of expression. Life in Eritrea, he explains, had become a “psychological prison”.

After graduating top of his class from Eritrea’s Asmara University, Debesai became a well-known TV journalist for state-run news agency Erina Update. But from 2001, the real crackdown began and independent newspapers such as Setit, Tsigenai, and Keste Debena, were shut down. In raids journalists from these papers were arrested en masse. He suspects many of those arrested were tortured or killed, and many were never heard of again. No independent domestic news agency has operated in Eritrea since 2001, the same year the country’s last accredited foreign reporter was expelled.

The authorities became fearful of internal dissent. Debesai noticed this at close hand having interviewed President Afwerki on several occasions. He describes these interviews as propaganda exercises because all questions were pre-agreed with the minister of information. As the situation worsened in Eritrea, the post-liberation haze of euphoria began to fade. Eritrea went into lock-down. Its borders were closed, communication with the outside world was forbidden, travel abroad without state approval was not allowed. Men and women between the ages of 18 and 40 could be called up for indefinite national service. A shoot-to-kill policy was put in operation for anyone crossing the border into Ethiopia.

Debesai felt he had no other choice but to leave Eritrea. As a well-known TV journalist he could not risk walking across into Sudan or Ethiopia, so he waited until he got the chance to leave for Bahrain.

Eritrea was once a colony of Italy. It had come under British administrative control in 1941, before the United Nations federated Eritrea to Ethiopia in 1952. Nine years later Emperor Haile Selassie dissolved the federation and annexed Eritrea, sparking Africa’s longest war. This long bitter war glued the Eritrean people to their struggle for independence from Ethiopia. Debesai, whose family went into exile to Saudi Arabia during the 1970s, returned to Eritrea as a teenager in 1992, a year after the Eritrean People’s Liberation Front captured the capital Asmara.

For Debesai returning to Asmara had been a “personal choice”. He wanted to be a part of rebuilding his nation after a 30-year conflict, and besides, he says, life in post-war Asmara was “socially free”, a welcome antidote to conservative Saudi life. Those heady days were electric, he says. An air of “patriotic nationalism” pervaded the country. Women danced in the streets for days welcoming back EPLF fighters. Asmara had remained largely unscathed during the war thanks to its high mountain elevation. Much of its beautiful 1930s Italian modernist architecture was intact, something Debesai was delighted to see.

But those early signs of hope that greeted independence quickly soured. By 1993 Eritreans overwhelmingly voted for independence, and since then Eritrea has been run by President Isaias Afwerki, the former rebel leader of the EPLF. Not a single election has been held since the country gained independence, and today Eritrea is one of the world’s most repressive and secretive states. There are no opposition parties and no independent media. No independent public gatherings or civil society organisations are permitted. Amnesty International estimates there are 10,000 prisoners of conscience in Eritrea, who include journalists, critics, dissidents, as well as men and women who have evaded conscription. Eritrea is ranked the worst country for press freedoms in the world by Reporters Sans Frontières.

The only way for the vast majority of Eritreans to flee their isolated, closed-off country is on foot. They walk over the border to Sudan and Ethiopia. The United Nations says there are 216,000 Eritrean refugees in Ethiopia and Sudan. By the end of October 2014, Sudan alone was home to 106,859 Eritrean refugees in camps at Gaderef and Kassala in the eastern, arid region of the country.

In Ethiopia, Eritrean refugees are found mostly in four refugee camps in the Tigray region, and two in the Afar region in north-eastern Ethiopia.

During the first 10 months of 2014, 36,678 Eritreans sought refuge across Europe, compared to 12,960 during the same period in 2013. Most asylum requests were to Sweden (9,531), Germany (9,362) and Switzerland (5,652). The UN says the majority of these Eritrean refugees have arrived by boat across the Mediterranean. The majority of them are young men, who have been forced into military conscription. All conscripts are forced to go to Sawa, a desert town and home to a military camp, or what Human Rights Watch has called an open-air prison. Many young men see no way out but to leave Eritrea. For them, leaving on a perilous journey for a life outside their home country is better than staying put. The Eritrean refugee crisis in Europe took a sharp upward turn in 2014, as the UNHCR numbers show. And tragedies, like the drowning of hundreds of Eritrean refugees off the Italian island of Lampedusa in October 2013, demonstrate the perils of the journey west and how desperate these people are.

Even when Eritrean refugees go no further than Sudan and Ethiopia, they face a grim situation. According to Lul Seyoum, director of International Centre for Eritrean Refugees and Asylum Seekers (ICERAS), Eritrean refugees in a number of camps inside Sudan and Ethiopia face trafficking, and other gross human rights violations. They are afraid to speak and meet with each other. She said, that though information is hard to get out, many Eritreans find themselves in tough situations in these isolated camps, and the situation has worsened since Sudan and Eritrea became closer politically.

Eritrea had a hostile relationship with Sudan during the 1990s. It supported the Sudan People’s Liberation Movement, much to the anger of President Al Bashir who was locked in a bitter war with the people of now-independent South Sudan. Today tensions have eased considerably, and President Afwerki has much friendly relations with Sudan to the detriment of then tens of thousands of Eritrean refugees in Sudan.

A former Eritrean ministry of education official, who is a refugee now based in the UK and who does not want to be named because of safety fears, believes there’s no freedom of expression for Eritreans in Ethopian camps, such as Shimelba.

The official says in 2013 a group of Eritrean refugees came together at a camp to express their views on the boat sinking near Lampedusa and they were abused by the Ethiopian authorities who then fired at them with live bullets.

Seyoum believes that the movement of Eritreans in camps in Ethiopia is restricted. “The Ethiopian government does not allow them to leave the camps without permission,” she says. Even for those who get permission to leave very few end up in Ethiopia, instead through corrupt mechanisms are trafficked to Sudan. According to Human Rights Watch, hundreds of Eritreans have been enslaved in torture camps in Sudan and Egypt over the past 10 years, many enduring violence and rape at their hands of their traffickers in collusion with state authorities.

Even when Eritreans make it to the West, they are still afraid to speak publicly and many are fearful for their families back home. Now based in London, Debesai is a TV presenter at Sports News Africa. As an exile who has taken a stance against the regime of President Afewerki, he has faced harassment and threats. He is harassed over social media, on Twitter and Facebook. Over coffee, he shows me a tweet he’s just received from Tesfa News, a so-called “independent online magazine”, in which they accuse him of being a “backstabber” against the government and people of Eritrea. Others face similar threats, including the former education ministry official.

For this piece, a number of Eritreans said they did not want to be interviewed because they were afraid of the consequences. But Debesai said: “It takes time to overcome the past, so that even for those in exile in the West the imprisonment continues.” He adds: “These refugees come out of a physical prison and go into psychological imprisonment.”

© Ismail Einashe and Index on Censorship

Ismail Einashe is a journalist and a researcher, based in London. He tweets@IsmailEinashe

Join us on 25 October at the Cambridge Festival of Ideas 2015 for Question Everything an unconventional, unwieldy and disruptive day of talks, art and ideas featuring a broad range of speakers drawn from popular culture, the arts and academia. Moderated by Index on Censorship CEO Jodie Ginsberg.

This article is part of the spring 2014 issue of Index on Censorship magazine. Click here to subscribe to the magazine.