NEWS
From drones to floating smartphones: how technology is helping African journalists investigate 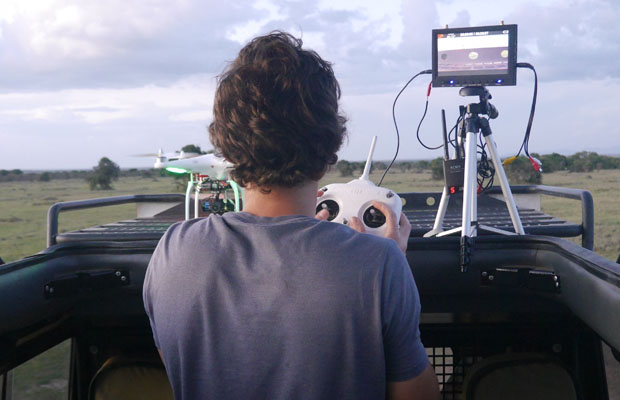 In conjunction with the Cambridge Festival of Ideas 2015, we will be publishing a series of articles that complement many of the upcoming debates and discussions. We are offering these articles from Index on Censorship magazine for free (normally they are held within our paid-for archive) as part of our partnership with the festival. Below is and article by Raymond Joseph on n how low-cost technology is helping African newsrooms get hold of information that they couldn’t previously track from the autumn 2014 issue. This article is a great starting point for those planning to attend the Technologies of revolution: how innovations are undermining regimes everywhere session at the festival.

Deep in Mpumalanga province, in the far north-east of South Africa, a poorly resourced newspaper is using a combination of high and low tech solutions to make a difference in the lives of the communities it serves.

It is also pioneering a new and innovative form of journalism that not only places its readers at the centre of its coverage, but also involves them directly in the newsgathering operation.

What this small newspaper does is a lesson for bigger, more established media outlets, which are searching for new non-traditional revenue streams and which, in the age of online and digital journalism, struggle to survive and remain relevant.

The Ziwaphi community-based newspaper is distributed to communities in the Nkomazi district, situated at the epicentre of the South Africa AIDS pandemic, where there is very little access to news reporting. One of the biggest problems in the area is water contaminated with sewage. Women and young girls spend hours every day collecting water from rivers for drinking, cooking and washing, but these same rivers are also often used to dispose of human waste. As a result the E.coli count sometimes spikes, causing diarrhoea. And every few years, there is an outbreak of cholera.

Using a grant, and technology assistance from the African Media Initiative (AMI), which is spearheading the drive to embed data-driven journalism in African newsrooms, Ziwaphi is placing old smartphones submerged in clear plastic bottles in rivers in the area. Functioning as simple electron microscopes, the phones use their cameras to take regular flash-lit pictures. These photographs are then magnified and compared against images from an existing database to detect dangerous levels of E.coli. The results are delivered via SMS to residents, informing them where it’s safe to collect water.

Completing the circle, the newspaper analyses the real-time data to detect trends, and hopefully even triangulates the sources of contamination.

Once a month, Ziwaphi publishes an in-depth story based on the results, which is shared with other community papers and local radio stations in the area. The hope is the information can then empower ordinary people in the region to force the government to deliver clean water and sanitation. Ziwaphi’s readers also help gather information themselves using a mobile-based citizen reporting app which supplements the smartphone data with eyewitness stories about the impacts of the pollution, and possible sources of contamination.

“The total project only cost $20 000, including a modest salary for a year for a full-time health reporter,” says Justin ­Arenstein, a strategist for AMI. “But the important thing, from a media sustainability perspective, is that Ziwaphi is using the water project to build the digital backbone it will need to survive in the near future.”

Until recently Africa lagged behind the rest of the world where the internet was concerned, because of the high cost of access. But now the deployment of new undersea cables is helping bring down the cost of connectivity, especially in east and southern Africa. This has sparked an exciting new era for journalism, with an explosion of ideas and innovations that are producing “news you can use” tools. Established media is increasingly reaching out to citizens to involve them in their news-gathering and content production processes. The phone-in-a-bottle project is an example of what can be done with limited resources.

In Kenya, the Radio Group, the third largest media house, has set up Star Health, the first in a set of toolkits to help readers do easy background checks on doctors and learn whether they have ever been found guilty of malpractice. In one case a man working as a doctor turned out to be a vet.

The site, which has proved to be a big hit in a country where dodgy doctors are a major problem, also helps users locate medical specialists and their nearest health facility. It can also be used to check whether medicines are covered by the national health scheme. Importantly, the results of queries on Star Health are delivered via a premium SMS service that generates an income stream, crucial in an age when media needs to diversify revenue models away from reliance on advertising and, in some case, copy sales.

“These tools don’t replace traditional journalism, rather they augment journalistic reportage by, for example, helping readers to find out how a national story on dodgy doctors personally affects them,” says Arenstein. News must be personal and actionable and should become an important part of the media’s digital transformation strategies, he stresses.

The reality of journalism today is that, even though outlets may not have the large audiences of conventional media, anyone with a smartphone or basic digital skills has the ability to be a “publisher”.

In Nigeria, for example, the Sahara online community has over a million followers on social media, far more than many media houses. The challenge in the future will be for newsrooms to tap into these grassroots networks, but still keep citizens’ voices at their centre.

A pioneering project in Nigeria’s isolated Delta region has seen the mainstream media working with an existing citizen-reporting network, Naija Voices, to adopt remote-controlled drones fitted with cameras to monitor for environmentally destructive oil spills. The plan is to syndicate the footage to mainstream TV and newspaper partners in Lagos and Abuja. This would allow the newspapers unprecedented reach into parts of the country that had previously been largely inaccessible.

The fixed-wing drones are relatively cheap and simple to fly, but they crash from time to time. “Getting new parts, like the wings or pieces of the fuselage, would be costly and time consuming, so we’re experimenting with 3D printers to create parts onsite and on demand,” says Arenstein.

This citizen-reporting experiment builds on the work of AfricanSkyCam which for the past year has been experimenting with drones in Kenya as part of “Africa’s first newsroom-based eye-in-the-sky”. SkyCam uses drones and camera-equipped balloons to help media that cannot afford news helicopters to cover breaking news in dangerous situations or difficult to reach locations.

In South Africa, Oxpeckers Center for Investigative Environmental Reporting is using “geo journalism” and other mapping techniques to amplify its reporting and to analyse stories such as rhino poaching and canned lion ­hunting – breeding tame lions for wealthy trophy-hunters to shoot. Investigations help uncover trends or links to criminal syndicates and the Oxpeckers Center’s reportage is credited with promoting a recent ban on canned hunting in Botswana, and helping to shape laws on trade in rhino and other wildlife products in China and in Mozambique.

But the reality is that poorly resourced African newsrooms seldom have the in-house technology or digital skills to build new online tools.

So, AMI’s digital innovation programme and similar initiatives at Google, the Bill & Melinda Gates Foundation, and at smaller donors including the Indigo Trust are all building external support systems to help newsrooms leapfrog into a digital future.

Donors are also focusing on embedding data journalism approaches into mainstream media. They are helping journalists use publicly available digital information from sources such as censuses or government budgets to build decision-making tools to help ordinary citizens make better informed decisions on bread and butter issues affecting their lives.

Helping drive the new-tech approach is Code for Africa, a network of civic technology labs planned for countries across the continent to help drive innovation and to work with media and citizen journalist networks, to help them bridge the digital divide.

Code for South Africa (C4SA) is helping everyone, from the township-based Ziwaphi and its cholera alert project, to national media outlets, such as the Mail & Guardian and City Press.

“The media know they’re in crisis, with their advertising-based business model under threat as audiences shift online, but digital innovation is still a hard sell,” says C4SA director Adi Eyal. “Progress is painstakingly slow because many African media owners are hesitant to invest before they know how these new models will generate revenue. The result is that much of what South African newsrooms are calling home-grown data journalism is just visualisation. They’re creating very little actionable information and virtually no news tools that people can use to make decisions. The investment in a one-off project is high, so it is important that the tools that are built live on, so that newsrooms can use them to report on issues and people can act.”

Progress is painstakingly slow, but nevertheless the building blocks are slowly being put in place as the “root stock” — datasets from across Africa — is collected and collated on the African Open Data portal for both newsroom journalists and civic coders to use. The data means they can create applications and tools which will help them build communities and generate income.

C4SA is also building an “invisible” back-end infrastructure that newsrooms can help build news tools quickly and cheaply. This includes support for initiatives such as OpenAfrica that helps newsrooms digitise and extract data from source documents. C4SA has also built a series of open, machine-readable, data rich application programming interfaces (APIs) that newsrooms can easily plug into their mobile apps or websites. The APIs drive tools like WaziMap, which uses censuses, elections and other data to help journalists to dig into the make up of communities, right down to local ward level. Each of these resources is a tool not only for the media, but also for civic activists and public watchdogs, says Arenstein.

In a recent column on the future of newspapers, Ferial Haffajee, the editor of City Press, a national South African Sunday newspaper that is struggling to reinvent itself in the digital age, wrote: “Nothing is as it was. Nor are most things what they seem. We have a future, and it is tantalising.”

And you just need to look at the smartphones in a bottle and 3D-printed drones to know that this future is slowly, newsroom by newsroom, project by project, becoming a reality.

Read more about the future of journalism in Index on Censorship’s latest magazine. Read more here and find out how to subscribe either in print, digital replica or app.

This article was posted on 21 October at indexoncensorship.org

Raymond Joseph
A contributor to Index on Censorship magazine, Raymond Joseph, an ICFJ/Knight International Journalism Fellow at International Center for Journalists (ICFJ), is veteran of South African newsrooms, where he has worked in senior editorial and executive positions on a wide variety of daily and weekly national and regional publications.