Have we created a media culture where politicians fear voicing an opinion that’s not the party line? Max Wind-Cowie reports 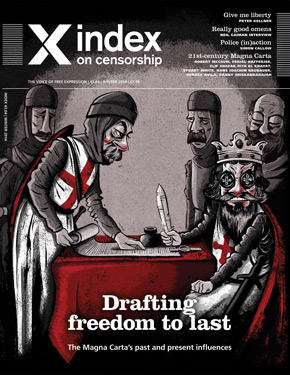 This article is part of the winter 2014 issue of the global quarterly Index on Censorship magazine. Click here to subscribe to the magazine.

In conjunction with the Cambridge Festival of Ideas 2015, we will be publishing a series of articles that complement many of the upcoming debates and discussions. We are offering these articles from Index on Censorship magazine for free (normally they are held within our paid-for archive) as part of our partnership with the festival. Below is an article by Max Wind-Cowie on free speech in politics, taken from the winter 2014 issue. It’s a great starting point for those who plan to attend the Elections – live! session at the festival this year.

We are often, rightly, concerned about our politicians censoring us. The power of the state, combined with the obvious temptation to quiet criticism, is a constant threat to our freedom to speak. It’s important we watch our rulers closely and are alert to their machinations when it comes to our right to ridicule, attack and examine them. But here in the West, where, with the best will in the world, our politicians are somewhat lacking in the iron rod of tyranny most of the time, I’m beginning to wonder whether we may not have turned the tables on our politicians to the detriment of public discourse.

Let me give you an example. In the UK, once a year the major political parties pack up sticks and spend a week each in a corner of parochial England, or sometimes Scotland. The party conferences bring activists, ministers, lobbyists and journalists together for discussion and debate, or at least, that’s the idea. Inevitably these weird gatherings of Westminster insiders and the party faithful have become more sterilised over the years; the speeches are vetted, the members themselves are discouraged from attending, the husbandly patting of the wife’s stomach after the leader’s speech is expertly choreographed. But this year, all pretence that these events were a chance for the free expression of ideas and opinions was dropped.

Lord Freud, a charming and thoughtful – if politically naïve – Conservative minister in the UK, was caught committing an appalling crime. Asked a question of theoretical policy by an audience member at a fringe meeting, Freud gave an answer. “Yes,” he said, he could understand why enforcing the minimum wage might mean accidentally forcing those with physical and learning difficulties out of the work place. What Freud didn’t know was that he was being covertly recorded. Nor that his words would then be released at the moment of most critical, political damage to him and his party. Or, finally, that his attempt to answer the question put to him would result in the kind of social media outrage that is usually reserved for mass murderers and foreign dictators.

Why? He wasn’t announcing government policy. He was thinking aloud, throwing ideas around in a forum where political and philosophical debate are the name of the game, not drafting legislation. What’s more, the kind of policy upon which he was musing is the kind of policy that just a few short years before disability charities were punting themselves. So why the fuss?

It’s not solely an issue for British politics. Consider the case of Donald Rumsfeld. Now, there’s plenty about which to potentially disagree with the former US secretary of state for defense – from the principles of a just war to the logistics of fighting a successful conflict – but what is he most famous for? Talking about America’s ongoing conflicts in the Middle East, he thought aloud, saying “because as we know, there are known knowns; there are things we know we know. We also know there are known unknowns; that is to say we know there are some things we do not know. But there are also unknown unknowns – the ones we don’t know we don’t know.” The response? Derision, accompanied by the sense that in speaking thus Rumsfeld was somehow demonstrating the innate ignorance and stupidity of the administration he served. Never mind that, to me at least, his taxonomy of doubt makes perfect sense – the point is this: when a politician speaks in anything other than the smooth, scripted pap of the media relations machine they are wont to be crucified on a cross of either outrage, mockery or both. Why? Because we don’t allow our politicians to muse any longer. We expect them to present us with well-polished packages of pre-spun, offence-free, fully-formed answers packed with the kind of delusional certainty we now demand of our rulers. Any deviation – be it a “U-turn”, an “I don’t know” or a “maybe” – is punished mercilessly by the media mob and the social media censors that now drive 24-hour news coverage.

Let me be clear about what I don’t mean. I am not upset about “political correctness” – or manners, as those of us with any would call it – and I am not angry that people object to ideas and policies with which they disagree. I am worried that as we close down the avenues for discussion, debate and indeed for dissent if we box our politicians in whenever they try to consider options in public – not by arguing but by howling with outrage and demanding their head – then we will exacerbate two worrying trends in our politics.

First, the consensus will be arrived at in safe spaces, behind closed doors. Politicians will speak only to other politicians until they are certain of themselves and of their “line- to-take”. They will present themselves ever more blandly and ever less honestly to the public and the notion that our ruling class is homogenous, boring and cowardly will grow still further.

Which leads us to a second, interrelated consequence – the rise of the taboo-breaker. Men – and it is, for the most part, men – such as Nigel Farage and Russell Brand in the UK, Beppe Grillo in Italy, Jon Gnarr in Iceland, storm to power on their supposed daringness. They say what other politicians will not say and the relief that they supply to that portion of the population who find the tedium of our politics both unbearable and offensive is palpable. It is only a veneer of radicalism, of course – built often from a hodge-podge of fringe beliefs and personal vanity – but the willingness to break the rules captures the imagination and renders scrutiny impotent. Where there are no ideas to be debated the clown is the most interesting man in the room.

They say we get the politicians we deserve. And when it comes to the twin plaques of modern politics you can see what they mean. On the one hand we sit, fingers hovering over keyboards, ready to express our disgust at the latest “gaffe” from a minister trying to think things through. On the other we complain about how boring, monotonous and uninspiring they all are, so vote for a populist to “make a point”. Who is to blame? We are. It is time to self-censor, to show some self-restraint, and to stop censoring our politicians into oblivion.

© Max Wind-Cowie and Index on Censorship

Join us on 25 October at the Cambridge Festival of Ideas 2015 for Question Everything an unconventional, unwieldy and disruptive day of talks, art and ideas, featuring a broad range of speakers drawn from popular culture, the arts and academia. Moderated by Index on Censorship CEO Jodie Ginsberg.

This article is part of the winter 2014 issue of the global quarterly Index on Censorship magazine. Click here to subscribe to the magazine.