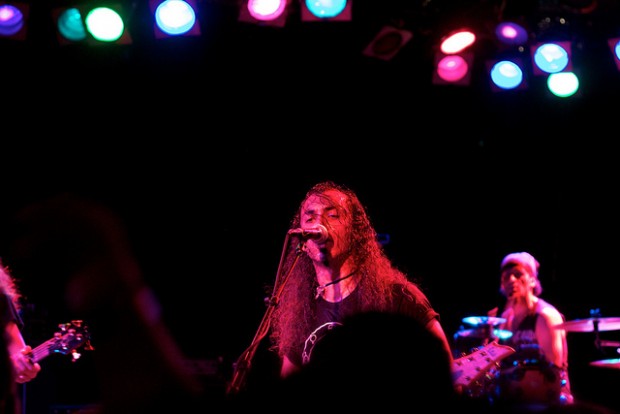 Underground music scenes have begun sprouting up in many countries around the world in the last few years, where previously no such thing existed. These movements have managed, in many cases, to continue despite a continuing trend of censorship in the arts and government repression. Whether it be punks in Indonesia rebelling against Sharia law or hip-hop artists in Mumbai rapping about independence from Britain, people all over the world are fighting for their right to artistic freedom. Here are a few cities around the world where musicians refused to be silenced.

Even after social activist and creator of The Second Floor, a cafe that promotes discussion, performance and art, Sabeen Mahmud was murdered by armed motorcyclists in Karachi in April 2015, the experimental and electronic music culture has continued to grow. Refusing to be intimidated into silence, artists like Sheryal Hyatt, who records as Dalt Wisney and founded Pakistan’s first DIY netlabel, Mooshy Moo, and the producing pair of Bilal Nasir Khan and Haamid Rahim, who created the electronic label and collective Forever South, are challenging conventional ideas about the music culture in Karachi.

Punk music is one of the ultimate forms of expressing disdain for a system of oppression, so it comes as no surprise that so many youths in Indonesia have embraced the genre with a passion. The punk scene, which grew exponentially following the 2004 tsunami when a great many lost family members and help from the government was less than forthcoming. The hostility and discrimination against the punk subculture came to a head in 2012 when police rounded up 64 youths at a concert, arrested them and took them to a nearby detention centre to have their mohawk hairstyles forcibly shaved. Despite this, bands like Cryptical Death continue to promote their scene and pen songs about resisting repressive government figures.

The vitality of punk music is also present in Burma, where musicians have been advocating for human rights through fast-paced music since around 2007. No U Turn and the Rebel Riot are popular punk groups that routinely rail against a government that they feel is repressive and unjust. No U Turn sounds like a resurrection of Bad Religion-meets-Naked Raygun with a blend of biting lyrics and punishing speed.

Indian hip-hop pioneers have been appearing more and more in the last 10 years, with Abhishek Dhusia, aka ACE, forming Mumbai’s Finest, the city’s first rap crew, and Swadesi, another local group whose work they think represents feelings and ideals of many young people in the city. Swadesi, in particular, advocates for social justice within their band’s mission, with working for NGOs and organising events being an important element of their group.

Musicians in Iraq have faced a variety of oppressive control, ranging from young people being stoned to death by Shi’ite militants for wearing western-style “emo” clothes and haircuts to Acrassicauda, a popular heavy-metal band from Baghdad, receiving death threats from Islamic militants. Acrassicauda had to flee the country a few years after the USA invaded Iraq, going first to Syria and then to the USA, where they were given refugee status and from where they now continue to make music. They have hopes of touring the Middle East soon but have no idea when they will be able to return to Iraq.