NEWS
In conversation with Timothy Garton Ash: A blueprint for freer speech

The professor of European Studies at Oxford University talks to Index on Censorship about his new book Free Speech: Ten Principles for a Connected World 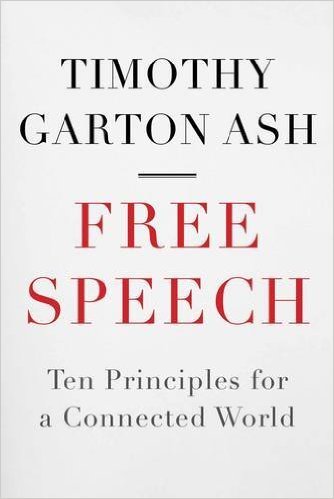 Timothy Garton Ash is no stranger to censorship. On the toilet wall of his Oxford home, there is a Polish censor’s verdict from early 1989 which cut a great chunk of text from an article of his on the bankruptcy of Soviet socialism.

Six months later socialism was indeed bankrupt, although the formative experiences of travelling behind the Iron Curtain in the late 1970s and throughout the 1980s — seeing friends such as Aleksandr Solzhenitsyn interrogated and locked up for what they published — never left him.

Now, in Free Speech: Ten Principles for a Connected World, the professor of European Studies at Oxford University provides an argument for “why we need more and better free speech” and a blueprint for how we should go about it.

“The future of free speech is a decisive question for how we live together in a mixed up world where conventionally — because of mass migration and the internet — we are all becoming neighbours,” Garton Ash explains to Index on Censorship. “The book reflects a lot of the debates we’ve already been having on the Free Speech Debate website [the precursor to the book] as well as physically in places like India China, Egypt, Burma, Thailand, where I’ve personally gone to take forward these debates.”

Garton Ash began writing the book 10 years ago, shortly after the murder of Theo van Gough and the publication of the Jyllands-Posten Muhammad cartoons. In the second of the 10 principles of free speech — ranked in order of importance — he writes: “We neither make threats of violence nor accept violent intimidation.” What he calls the “assassin’s veto” — violence or the threat of violence as a response to expression — is, he tells Index, “one of the greatest threats to free speech in our time because it undoubtedly has a very wide chilling effect”.

While the veto may bring to mind the January 2015 killings at Charlie Hebdo, Garton Ash is quick to point out that “while a lot of these threats do come from violent Islamists, they also come from the Italian mafia, Hindu nationalists in India and many other groups”.

Europe, in particular, has “had far too much yielding, or often pre-emptively, to the threat of violence and intimidation”, explains Garton Ash, including the 2014 shutting down of Exhibit B, an art exhibition which featured black performers in chains, after protesters deemed it racist. “My view is that this is extremely worrying and we really have to hold the line,” he adds.

Similarly, in the sixth principle from the book — “one of the most controversial” — Garton Ash states: “We respect the believer but not necessarily the content of the belief.”

This principle makes the same point the philosopher Stephen Darwall made between “recognition respect” and “appraisal respect”. “Recognition respect is ‘I unconditionally respect your full dignity, equal human dignity and rights as an individual, as a believer including your right to hold that belief’,” explains Garton Ash. “But that doesn’t necessarily mean I have to give ‘appraisal respect’ to the content of your belief, which I may find to be, with some reason, incoherent nonsense.”

The best and many times only weapon we have against “incoherent nonsense” is knowledge (principle three: We allow no taboos against and seize every chance for the spread of knowledge). In Garton Ash’s view, there are two worrying developments in the field of knowledge in which taboos result in free speech being edged away.

“On the other hand, you have student-led demands of no platforming, safe spaces, trigger warnings and so on,” Garton Ash adds, referring to the rising trend on campuses of shutting down speech deemed offensive. “Universities should be places of maximum free speech because one of the core arguments for free speech is it helps you to seek out the truth.”

The title of the books mentions the “connected world”, or what is also referred to in the text as “cosmopolis”, a global space that is both geographic and virtual. In the ninth principle, “We defend the internet and other systems of communication against illegitimate encroachments by both public and private powers”, Garton Ash aims to protect free expression in this online realm.

“We’ve never been in a world like this before, where if something dreadful happens in Iceland it ends up causing harm in Singapore, or vice-versa,” he says. “With regards to the internet, you have to distinguish online governance from regulation and keep the basic architecture of the internet free, and that means — where possible — net neutrality.”

A book authored by a westerner in an “increasingly post-western” world clearly has its work cut out for it to convince people in non-western or partially-western countries, Garton Ash admits. “What we can’t do and shouldn’t do is what the West tended to do in the 1990s, and say ‘hey world, we’ve worked it out — we have all the answers’ and simply get out the kit of liberal democracy and free speech like something from Ikea,” he says. “If you go in there just preaching and lecturing, immediately the barriers go up and out comes postcolonial resistance.”

“But what we can do — and I try to do in the book — is to move forward a conversation about how it should be, and having looked at their own traditions, you will find people are quite keen to have the conversation because they’re trying to work it out themselves.”