NEWS
The Bahrain 13: One year since Index magazine sent to jailed academic and blogger

In August 2015, Index editor Rachael Jolley sent a copy of the magazine to jailed academic Abduljalil al-Singace, a member of the Bahrain 13. One year on, eleven of the group of jailed activists remain in prison. 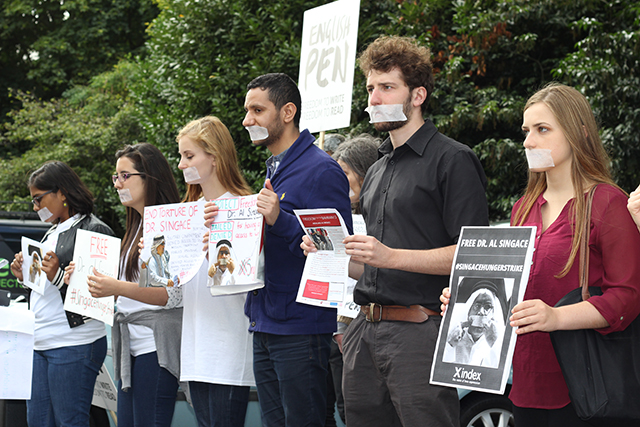 Protesters in London demand the release of Abduljalil al-Singace, July 2015.

One year has passed since Index on Censorship magazine editor Rachael Jolley sent a copy of the publication – Fired, Threatened, Imprisoned… Is Academic Freedom Being Eroded? – to jailed Bahraini academic, human rights activist and writer Abduljalil al-Singace to mark his 150 days on hunger strike.

In a letter accompanying the magazine, Jolley aired concerns that al-Singace – who had been protesting prison conditions while being held in solitary confinement – had suffered torture and called on the Bahraini authorities to ensure he “had access to the medical treatment he urgently requires”. 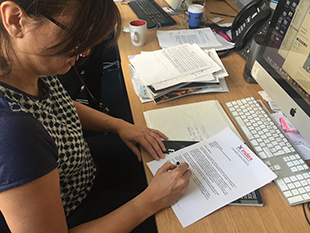 On 15 March 2011 Bahrain’s king brought in a three-month state of emergency, which included the through establishing of military courts known as National Safety Courts. The aim of the decree was to quell a series of demonstrations that began following a deadly night raid on 17 February 2011 against protesters at the Pearl Roundabout in Manama, when four people were killed and around 300 injured.

Over 300 individuals were subsequently convicted through National Safety Courts, often for speaking out against the government or exercising their right to assemble freely. Many were punished simply for supporting or being part of the country’s opposition movement.

On a midnight raid at his home on 17 March 2011, al-Singace was arrested at gunpoint. During the arrest, he was beaten, verbally abused and his family threatened with rape. Disabled since his youth, al-Singace was forced to stand without his crutches for long periods of time during his arrest. Masked men also kicked him until he collapsed. The Bahraini authorities placed him in solitary confinement for two months. During this time the guards starved him, beat him and sexually abused him.

Al-Singace is part of what is known as the Bahrain 13, a group of peaceful activists and human rights defenders imprisoned in Bahrain in connection with their role in the February 2011 protests.

On 22 June 2011 a military court sentenced all members of the Bahrain 13 to between five years and life in prison, on trumped-up charges of attempting to overthrow the regime, “broadcasting false news and rumours” and “inciting demonstrations”.

Evidence used against them was extracted under torture, but this didn’t prevent their sentences being upheld on appeal in September 2011, at a civilian court in May 2012 and in January 2013 at the Court of Cassation. The Bahrain 13 has now exhausted all domestic remedies and are currently serving their sentences Jau prison, notorious for torture and ill treatment.

During their arrest and detention, the Bahrain 13 were subject to beatings, torture, sexual abuse and threats of violence and rape towards themselves and members of their family by police and prison authorities. Eleven of the 13 remain in prison.

The group consists of:

Sheikh Abduljalil al-Muqdad, a religious cleric and a co-founder of the al-Wafaa Political Society. During his detention he has been beaten, tortured and told his wife would be raped.

Abdulhadi al-Khawaja, a human rights activist and co-founder of the Bahrain Center for Human Rights. On 8 February 2012, he began a hunger strike to protest his wrongful detention and treatment in prison. He ended his hunger strike after 110 days on 30 May 2012. He went on hunger strike again in April 2015 to protest against the torture of prisoners at Jau.

Salah al-Khawaja, a prominent human rights activist, marriage consultant and the brother of Abdulhadi. The government previously arrested Salah in the 1980’s and 1990’s for engaging in political activity against the government. He was released on 19 March 2016.

Abdulhadi al-Makhdour, a religious cleric and political activist. Authorities prevented him from showering and performing his daily prayers. They spat in his mouth and forced him to swallow. They also denied him access to a lawyer and barred him from contacting his family.

Mohammed Habib al-Muqdad, a religious cleric and the president of the al-Zahraa Society for Orphans. During his time in prison he was sexually assaulted with sticks and forced to gargle his own urine. Security guards also electrocuted him on his body and genitals.

Mohammed Ali Ismael, a prominent political activist in Bahrain. During his imprisonment, he has been beaten and verbally abused.

Abdulwahab Hussain, a life-long political activist and leader of the Al Wafaa political opposition society. He was previously detained for six months in 1995 and for five years between 1996 and 2001. He was diagnosed with multiple peripheral polyradiculoneuropathy, a condition which affects the body’s nerves, in 2005 and suffers from sickle-cell disease and chronic anaemia. His health conditions have worsened as a direct result of the torture and ill-treatment, while medicine and treatment have been denied to him. During his current sentence he has contracted numerous infections.

Mohammed Hassan Jawad, human rights activist who campaigns for the rights of detainees and prisoners who has been jailed a number of times since the 1980s. During his current imprisonment, he was electrocuted and beaten with a hose.

Sheikh Mirza al-Mahroos, a religious cleric, a social worker, and the vice-president of the al-Zahraa Society for Orphans. During his time in prison, Al-Mahroos has been denied medical treatment for severe pain in his legs and stomach. Despite having the proper documentation, he was not permitted to visit his sick wife, who later died in early 2014.

Hassan Mushaima, a political activist and leader of the Al Haq opposition society in Bahrain who has been arrested several times for his pro-democratic activities. He was diagnosed with lung cancer in 2010, which he was successfully treating at the time of his arrest. Medical results have been denied to him in prison.

Sheikh Saeed al-Noori, a religious cleric and member of the al-Wafaa Political Society. During his detention he has been tortured, forced to stand for long periods of time and had shoes stuffed in his mouth.

Ebrahim Sharif, the former president of the National Democratic Action Society. He is a political activist and has campaigned for democratic reform and equal rights. On 19 June 2015, Sharif was released following a royal pardon, only to be rearrested on 12 July 2015. He was charged with “inciting hatred against the regime” for a speech he delivered in commemoration of 16-year-old Hussam al-Haddad, who was shot and killed by police forces in 2012. He was released again in July 2016 and remains out of prison but the Bahrain Institute for Rights and Democracy he is at risk of being arrested again because of an appeal by prosecutors.

Source: The Bahrain Institute for Rights and Democracy.

Also read:
– Bahrain continues to use arbitrary detention as a weapon to silence critics
– Bahrain: critics and dissidents still face twin threat of statelessness and deportation