Wendy Funes: "I dedicate this prize to my fellow people of Honduras"
19 Apr 2018
BY INDEX ON CENSORSHIP 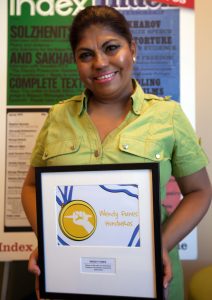 Wendy Funes is an investigative journalist from Honduras who regularly risks her life for her right to report on what is going on in the country. She is a courageous female voice, writing in a violent and corrupt society where two journalists have been killed this year and where women are regularly subjected to severe domestic violence and often killed. Funes is an inventive and passionate human rights reporter. For one article she got her own death certificate issued so that she could show up with the corruption in the civil registration office. For another one, they will be forced to fight for an investigation into children being forced to take to the streets of the country’s capital.

Looking out of one of the windows of my house a few days ago, while thinking about what to say this afternoon, I remembered the paradise tree in the garden which my childhood swing used to hang from. When it withered and died, I felt devastated. But now, forty years later, there are four big trees growing in its place and are all fruit-bearing.

For me, this award is so immense and significant that I can only explain it and express my thanks for it with a story that I have never told until now.

In 2002 she began her first investigations as a journalist and it gave meaning to her life. But in 2008, censorship forced her to leave her dream job at the newspaper and by 2011 her constant fight for free expression and to tell the truth meant that all the doors to the media monopoly was closed to her.

But once again journalism saved her. She discovered that frustration with censorship is not the way. Rather, the way to overcome censorship is with the word, and although some doors were closed to her, doors to a more humane, less commercial, more rigorous kind of journalism were opened. The kind of journalism that investigates and pauses on each word, that does not proclaim impartiality but seeks the truth. The kind of journalism that is capable of showing her people that their society is being governed by drug trafficking and ruthless groups who since the 2009 coup have sacrificed lawyers, doctors, women, 70 journalists and executed young people in an almost invisible genocide.

The kind of journalism that can identify with a nation governed by someone who was rejected at the polls. Someone who controls the press that, in turn, covers up military assassinations, the corruption of officials and the everyday cruel realities for the Honduran people. Realities such as the 14-year-old girl sold by her father for a litre of alcohol whilst already pregnant, or the new-born baby who died of malnutrition and weighed more when he was born than when he died. In short, so many stories to tell. So many stories that the press is censored from telling.

But the young girl with whom this story began has been so fortunate that by refusing to remain silent and refusing to become part of this cruel system, by telling stories that a journalist should tell, she is being shown once again that the courage to dream is well-rewarded. That there is always someone willing to extend their hand and say “Come on, it’s worth resisting, it’s worth dreaming and fighting to transform all of this pain into a reward.” A reward which gives me hope.

I dedicate this prize to my fellow people of Honduras who demonstrate every day that they wish to move forward and overcome the violence, impunity and corruption which have been afflicting us for more than three decades.