Rebel Pepper: "I will continue working hard on creating new cartoons"
19 Apr 2017
BY INDEX ON CENSORSHIP 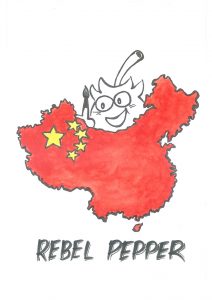 Wang Liming, better known under the pseudonym Rebel Pepper, is one of China’s most notorious political cartoonists. For satirising Chinese Premier Xi Jinping and lampooning the ruling Communist Party, Rebel Pepper has been repeatedly persecuted. In 2014, he was forced to remain in Japan, where he was on holiday, after serious threats against him were posted on government-sanctioned forums. The Chinese state has since disconnected him from his fan base by repeatedly deleting his social media accounts, he alleges his conversations with friends and family are under state surveillance, and self-imposed exile has made him isolated, bringing significant financial struggles. Nonetheless, Rebel Pepper keeps drawing, ferociously criticising the Chinese regime.

Hello everybody, my name is Wang Liming and I am a Chinese political cartoonist who is currently living in exile in Japan. I am also known as “Rebel Pepper”. I am very grateful for the recognition of my works and am very honoured to receive this award. Unfortunately, I am unable to personally attend the awards ceremony and the other activities Index on Censorship has in store as there were some issues with my visa.

China has little to no freedom of speech and its people are constantly living in fear under this totalitarian regime. The Chinese Communist Party often portray the Chinese administration as being honourable and righteous and delude the people into believing in this false portrayal.

Political cartoons are significant as I can use my works to peel away the mask of false perfection put on by the Chinese government. The humour and satire employed in my works can also help lighten the mood and dispel the fear that the Chinese people have towards the administration. I feel that these are the key reasons why political cartoons play such an important role in China.

Ever since I came to Japan, I have been able to relish freedom of speech to the fullest.  As such, my works are no longer limited by any external restrictions save for the boundaries of my own imagination.

I would like to especially thank my wife as I would not have been able to persevere to this day had it not been for her unending support and understanding. I would also like to extend my gratitude to my Chinese friends and comrades who sympathise with my struggles and understand why I do what I do. I would also like to thank my Japanese friends who have given me plenty of opportunities to create and publish my works.

I will continue working hard on creating new cartoons – this is the least I can do towards democratising China. Thank you everyone!