Comedian Shappi Khorsandi, the host of this year’s Index on Censorship Freedom of Expression Awards, understands the effects of censorship first hand.

Her father, Iranian writer and comic Hadi Khorsandi, was forced to flee to Britain in 1979 with his family, including a young Shappi, following the Iranian revolution and his criticism of the new regime. Even in the UK, Khorsandi continued to receive death threats.

“During the 1979 revolution against the Shah, there were crowds calling for my father’s execution because of his satirical writings. The only way to stay in Iran was to toe the party line. He chose exile, a profound experience for a writer,” Khorsandi says.

Khorsandi speaks movingly of the effects of exile on writers, saying: “They have to leave their home country to be able to express themselves freely in their native language. Censorship was a huge thing in my family.”

Once in Britain, Hadi Khorsandi continued writing and also published a satirical newspaper: “Because of this there was a plot to assassinate him in 1984,” says his daughter.

Many of those shortlisted for this year’s freedom of expression awards have experienced similar attempts to silence them. Lirio Abbate, an Italian journalist who faces constant threat of attack because of his investigations into the mafia, has 24-hour police protection. Others, like Angolan journalist Rafael Marques de Morais, Moroccan rapper El Haqed, or Ecuadorian cartoonist Bonil, are repeatedly threatened with jail for challenging powerful government and business interests.

Index on Censorship magazine featured Hadi Khorsandi’s work in two of its 1986 issues, describing his humour as “aimed at the follies and absurdities of the present Iranian regime and giving the reader a vivid picture of life in a country where ideology and zeal have been allowed to reign unchecked.” The October issue in which Hadi Khorsandi’s work features also includes an essay by Nobel Prize-winning author Gabriel Garcia Marquez.

“I’ve known about Index on Censorship for years – there were always Index logos in our house because of my father’s work,” says Khorsandi. “It’s quite an honour to have been asked to host the awards, one I accept on my father’s behalf.”

The 15th Index on Censorship Freedom of Expression Awards were held on March 18 at the Barbican, London.

Related
• Index announces winners of 15th annual Freedom of Expression Awards
• Safa Al Ahmad: Facts are a precious commodity in Saudi Arabia
• Rafael Marques de Morais: I believe in the power of solidarity
• Amran Abdundi: This award is for the marginalised women of northern Kenya
• El Haqed: I will fight for freedom, equality and human rights for ever
• Tamas Bodoky: The independence of journalism in Hungary is under threat
• Special Index Freedom of Expression Award given to persecuted Azerbaijani activists and journalists
• Video: Comedian Shappi Khorsandi hosts Index on Censorship awards
• Drawing pressure: Cartoonists react to threats to free speech 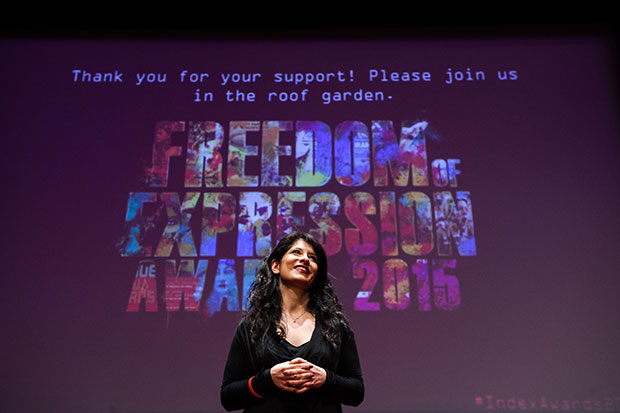 This article was posted on March 2, 2015 at indexoncensorship.org