Smockey: "Not everyone is lucky enough to have a microphone in front of them” 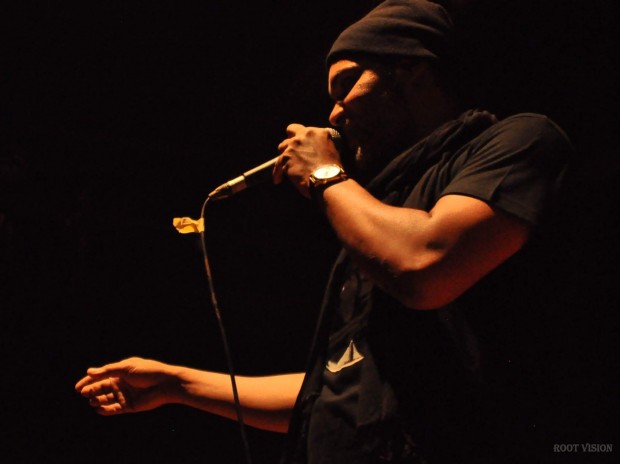 Searching for “dissident artists” online, you’d be forgiven for thinking they are a purely Chinese or Russian phenomenon. But for every Ai Weiwei or Pussy Riot, there are scores of artists and musicians around the world whose persecution does not make the Six O’Clock News.

Serge Bambara — aka Smockey, meaning “se moquer”, or “to mock” — is a hip-hop artist and activist little known outside his home country of Burkina Faso, but who has had a marked impact on political and social developments there.

He combines rap with traditional Burkinabé music and often humour to “spread truth”. “Knowledge is important, and I write as a way of presenting it to the people,” he told Index on Censorship.

Index on Censorship is proud to name Smockey as the recipient of the Music in Exile Fund Fellowship. As the beneficiary, he will perform live in London, as well as receive training and opportunities to connect with other free speech heroes around the world.

“Serge Bambara’s overtly political music has made him a target for entrenched interests in Burkina Faso,” said Jodie Ginsberg, CEO of Index on Censorship. “Throughout his career, he has used his talents to fight for racial equality and battle corruption. We are delighted to have him as the inaugural Music in Exile fellow.”

In September 2015, after two years of serious activism and over 15 years of writing music about the problems in his country, forces loyal to the recently ousted president Blaise Compaoré — obviously unhappy with the truths he was spreading — bombed Smockey’s recording studio, the acclaimed Studio Abazon. The attack was an apparent attempt on his life as revenge for the role his music and activism played in the deposition of Compaoré, according to Smockey.

Attacks on artistic freedom — particularly musicians — almost doubled in 2015. But to understand why Smockey was targeted in such a violent and specific manner, we need to go back to his roots.

Smockey first became interested in hip-hop music through listening to American artists like Public Enemy, Afrika Bambaataa and LL Cool J. He began rapping in Burkina Faso in 1988, before moving to France in 1991 to study. While there, he signed to the record label EMI, but it wasn’t until he returned to his country of birth on a holiday in 1999 that his music took on the political dimension it is famed for today.

“It was around the time of the murder of journalist Norbert Zongo, who was assassinated following investigations into the activist by president Blaise Compaoré,” he said. “Student demonstrators were being beaten by police. It was very disturbing to me.”

Smockey soon packed up his computer and keyboard in France and moved back home to Burkina Faso in 2001. “Seeing the things going on in my country, I had to do something,” he said. “At the time, I didn’t know exactly what, but I knew it would involve music.”

He understands fully the responsibility that often comes with being in the spotlight in a country burdened by so many difficulties. “Not everyone is lucky enough to have a microphone in front of them, so if you have the chance to talk, you have to say something important,” Smockey said. This is the thinking behind subversive songs like Votez Pour Moi (about democracy), Tomber la Lame (FGM) and A Qui Profite le Crime (government corruption).

In the summer of 2013, Smockey co-founded Le Balai Citoyen, or The Citizen’s Broom, with reggae artist Sams’K Le Jah. The grassroots movement was set up in opposition to Compaoré, aiming to bring positive change to Burkina Faso. “As our problems were political, our solutions had to be political also,” Smockey explained.

As for the name and ethos of the movement, he said: “With just one twig, you won’t get much done, but when you bind them together and make a broom you can clean a lot of shit. This is why we always say ‘our number is our strength’ because it is impossible to be defeated if we are united.”

Le Balai Citoyen played a big part in the ousting of Compaoré. It urged the people of Burkina Faso to organise and take to the streets. Following mass demonstrations in late 2014, Compaoré resigned on 31 October after 27 years in power. A transition government, led by the military, was established, which Smockey was broadly supportive of. However, a military coup saw General Gilbert Diendéré — leader of the Regiment of Presidential Security (RSP), Compaoré’s former secret service — seize power in September 2015.

Le Balai Citoyen staged a march to the presidential palace in protest of the coup. Smockey, along with fellow demonstrators, were shot at and then chased through the streets of Ouagadougou by RSP. Although Smockey managed to escape, many others were beaten and arrested.

“We knew we were lucky, but we weren’t able to go home,” he said. On 17 September he went into hiding. Asked whether he is an artist or an activist first, Smockey told Index on Censorship that depends on what he is doing at any one time. His fans tend not to draw a distinction, he explained. Nor did Diendéré, it would seem, whose forces rocket-bombed Smockey’s studio on the same day he went underground.

Studio Abazon was a hub for young and aspiring musicians. “They attacked it because they knew it was an important landmark to the resistance,” Smockey explained. “Their thinking was that you have to kill the leaders, everyone else will go away.”

Prior to the attack, the rapper had received death threats, and although he had the opportunity to flee to Holland, he stayed put. “You can’t talk about strength in numbers if on the first sign of difficulty you are going to run away,” he said.

Diendéré’s rule didn’t last long as he failed to consolidate his authority and came under pressure from international leaders and the army to step down. Smockey came out of hiding and fresh elections were held in Burkina Faso.

“The current government, although it’s not perfect, was chosen by the people so it’s legitimate,” explains Smockey. “Our job is now to be the watchers and guards of democracy.”

The rapper is optimistic about the future of his country and proud of the role his music and activism have played in developments so far. With the progress made, he now plans to put more focus on his music. “I’ve started rebuilding the studio, and have already begun recording artists again, but much more work needs to be done,” he said.

He has plans for a tour of the country and wants to set up a hip-hop festival. “It will create a kind of bridge between rappers, old school and new,” he said. “We’re going to do one big concert every month as a way of keeping people connected.”

When Index on Censorship launched the Music in Exile Fund in October 2015 along with the producers of the award-winning documentary They Will Have To Kill Us First, Johanna Schwartz, director of the film, said: “When faced with censorship, musicians across the world need our support.”

In whatever small way, the Music in Exile Fund will help see Smockey’s plans become reality.

The Music In Exile Fund was launched to help support musicians facing censorship around the world. The fund contributes to Index on Censorship’s year-long Freedom of Expression Awards Fellowship programme, helping musicians to build their international profile and to create, perform and share their work in a safe environment. You can donate here.