Syrian journalist says UK is dealing with Assad as "a president, not a criminal"
13 Oct 2016
BY CAMERON OCHSE 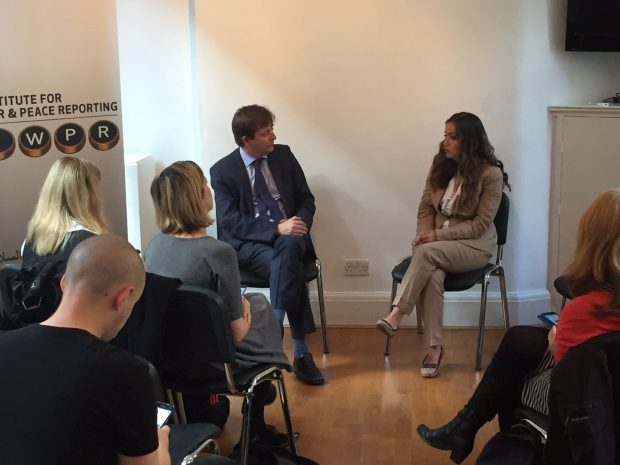 Journalist Zaina Erhaim says the Syrian government wants her killed and that co-operating with Syrian officials, by seizing her passport, was a very dangerous thing for the UK to have done. “It’s obvious that they are still dealing with Assad as a president, not a criminal.”

Erhaim, a Chevening scholar and award-winning reporter, had her passport confiscated by British officials when she flew into London to take part in a literature festival with former BBC foreign correspondent Kate Adie. Erhaim, who won the 2016 Index award for journalism, voiced concern that the actions of officials in the UK suggested that they condoned the Syrian government. “They were speaking about the regime with really tender language as if was a legitimate government,” she said.

The journalist was speaking at a press conference, organised by the Council for Arab-British Understanding, in conjunction with Index on Censorship, Reporters Without Borders, the Institute for War and Peace Reporting and the Frontline Club. Her passport was seized at Heathrow on September 22 after being reported as stolen by the Syrian government.

Erhaim considers herself to be lucky because she has another passport, even if it is now full. She is also thankful that she works for an international organisation, speaks English and has the support of other journalists.

“If this happened to another Syrian who doesn’t have another valid passport and he or she’s not supported, what would happen?,” she asked. “Because if [border officials] are following the rules, they should deport him or her back to Damascus.”

Another major concern for her is making sure European governments are not able to deport Syrians fleeing from war in the future without the press being informed.

When asked what a future without her passport holds, Erhaim said: “I believe this is going to be the last trip abroad I’m making. This is not as scary as not being able to go back to Turkey because all my family is there, the father of my baby is there. I don’t have my exit stamp for Turkey because that’s on the new passport. So they might ask me, ‘Where is your exit stamp?’ and not allow me in, which is really scary.”

If Erhaim is unable to gain access to Turkey, the only other option she sees at the moment is to stay in Britain or another European country where she holds a visa and seek asylum. This is a prospect she currently rejects. “I’m not ready for that,” she said.

Erhaim’s future may be uncertain but she will continue to fight and will only consider asking for asylum if she was threatened in Turkey or survived an assassination attempt.

“I would rather be stuck in Turkey than here, and I will try to go back.”

Zaina Erhaim: Balancing work and family in times of war