Habari RDC: "Great is my joy on this day to receive this award on behalf of the Congolese blogging community"
19 Apr 2018
BY INDEX ON CENSORSHIP 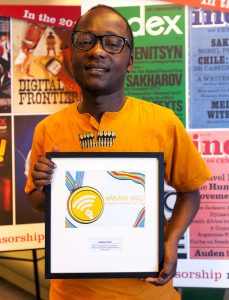 Launched in 2016, Habari RDC is a collective of more than 100 young Congolese bloggers and web activists, who use Facebook, Twitter and YouTube to give voice to the opinions of young people from all over the Democratic Republic of Congo. Their site posts stories and cartoons about politics, but it also covers football, the arts and subjects such as domestic violence, child exploitation, the female orgasm and sexual harassment at work. Habari RDC offers a distinctive collection of funny, angry and modern Congolese voices, who are demanding to be heard.

In the early 2000s a young teenager wanted to share what he thought of Congolese society. It was so important to him. He had so much to say. He, the boy who grew up in the mining region of Katanga in the south-east of the Democratic Republic of Congo, wanted only one thing: to finally speak.

The Democratic Republic of Congo is almost 10 times the size of the United Kingdom. One of the European explorers described this immense territory as a geological scandal. Little did he know how accurate he was being. This country is a scandal. In a country that supplies minerals needed to make your smartphones more than two million of its children are victims of malnutrition and its young people are idled by massive unemployment.

In the mid-2000s, I discovered the internet and its applications like blogs and social networks. It was great. I immediately realised the power of this tool. Finally, I had in my hands a means of allowing me to denounce these scandals.

In a country like mine, there are multiple polarisations, and at all scales of power. The Guardian, last year mentioned the transition to the era of the post-truth, people no longer believe the facts. In the DRC, we have been pioneers in this area. The spread of the rumour was there before social networks, it has only grown since.

It is in this context that Habari, our organisation was formed around 100 bloggers distributed around the country. We are a team of editors who verify the facts that we rely on. We may not always agree because we have diverse opinions, but we all work together for the greater good of our country.

Great is my joy on this day to receive, on behalf of the Congolese blogging community Habari DRC, this Index on Censorship Digital Activism Award. I consider this honour more a recognition than a reward. In my opinion, all the Congolese bloggers are invited on this day to redouble their efforts to make freedom of expression on the internet triumph.

First and foremost, I would like to thank the team that I have the chance to coordinate. All bloggers who see Habari as a big Congolese family and our hundreds of thousands of readers and commentators.

I would like to thank Index for recognising our work, our activism and, above all, our honesty, which is our are our cardinal value.

I would also like to thank RNW Media, the Dutch organisation that supports us on a daily basis.

My thoughts are with all those who are imprisoned, tortured and humiliated for exercising their freedom of expression.