Smockey: "We would like to trust the justice of our country”

Nominations for 2017 Index on Censorship Freedom of Expression Awards are now open. Make yours now. 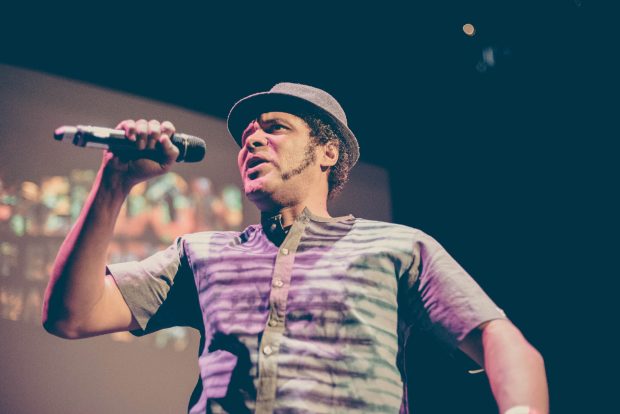 Burkinabe rapper and activist with Le Balai Citoyen, Smockey, became the inaugural Music in Exile Fellow at the Index on Censorship Freedom of Expression Awards in April 2016. In July his recording studio, the lionised Studio Abazon, was destroyed in a fire.

“All my music files since 2001, including my master tapes and those of my productions and clients, were lost,” Smockey told Index on Censorship. “I was working on the album of a young rapper named Balla, volume three of my compilation called La Part des Ténèbres and original music for a mobile phone service product – all gone.”

Two months on, it still isn’t clear what caused the blaze. “I don’t have any news about ongoing investigations, so all I know is that anyone could have caused it apart from me,” he said.

Studio Abazon was impossible to insure due to a September 2015 firebomb attack by forces loyal to Burkina Faso’s ousted president, which destroyed the studio. Having recently finished rebuilding in the months before the fire, Smockey said he is obliged to do so again. “But this time I will build it underground to make it more secure.”

Some of Smockey’s friends have launched a crowdfunding campaign to raise funds for the studio and the rapper said he would welcome all the help he can get.

When he last spoke with Index, Smockey was writing tracks for his new album. Plans to record have now been put on hold.

Still, the setback hasn’t put the rapper off performing. He recently played to packed gigs in Switzerland, Germany and Belgium, where he took part in the Esperanzah! music festival. In October he will take the stage in his home country at the Waga Hip Hop Festival. In November he will return to Germany — for appearances in Berlin and Munich — and Switzerland. In December, he will perform in Spain.

Le Balai Citoyen, which Smockey co-founded, is a grassroots political movement which helped bring to an end the three-decade rule of former president Blaise Compaoré. It is currently involved in a new project to build a memorial for the late revolutionary Burkinabe leader, and hero of Smockey’s, Thomas Sankara. To raise funds and awareness for the memorial, Smockey will soon perform at Revolution Square, where up to a million people had gathered to demand Compaore’s resignation in 2014.

“We are just nine months past the insurrection, so now is a good time for the memorial,” Smockey told Index. “Seeing it every day in the city would help put pressure on those in power — those who think they can manipulate us but are mistaken — to do their job.”

Rehabilitating the memory of Sankara – who was overthrown and assassinated in a coup d’état led by Compaoré in 1987 – is, therefore, an important part of bringing about of justice for all affected by the crimes of the former regime, Smockey said.

The former prime minister of Burkina Faso, Luc-Adolphe Tiao, who was appointed by Compaoré, was this month charged and jailed for murder. Smockey welcomes this as a step forward for the country.

“We encourage everyone who is implicated in these crimes to stand before justice in this country, at least because we have a certain sense of honour,” he said. “Burkina Faso literally means the land of men with integrity, so we would like to trust the justice of our country.”

Le Balai Citoyen is now working with a coalition of seven other organisations, collectively called Ditanyè, to tackle the challenges facing the country and to preserve “the positive gains from the revolution,” Smockey added.

Looking forward, he understands the country must have priorities and the courage to define them. “After justice, which is necessary for reconciliation, we have to work on the economic recovery and jobs for young people,” he said. “We want to work now.”

Nominations are now open for 2017 Index on Censorship Freedom of Expression Awards. You can make yours here.

Zaina Erhaim: Balancing work and family in times of war

Artist Murad Subay worries about the future for Yemen’s children