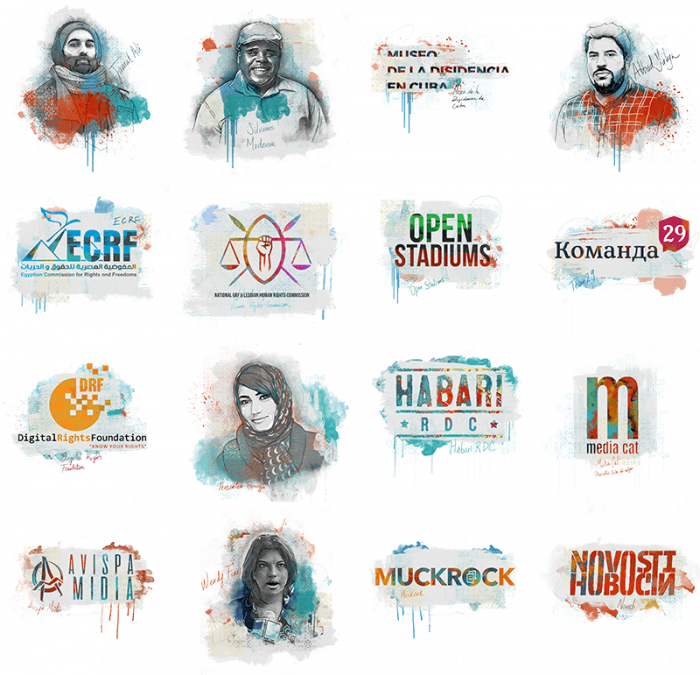 Drawn from more than 400 crowdsourced nominations, this year’s nominees include artists, journalists, campaigners and digital activists tackling censorship and fighting for freedom of expression. Many of the 16 shortlisted are regularly targeted by authorities or by criminal and extremist groups for their work: some face regular death threats, others criminal prosecution.

The gala takes place on Thursday 19 April in London and will be hosted by stand-up poet Kate Fox.

We will be live tweeting throughout the evening on @IndexCensorship. Get involved in the conversation using the hashtag #IndexAwards2018. Listen LIVE beginning at 7:30pm BST on Resonance FM

Jamal Ali is an exiled rap musician with a history of challenging Azerbaijan’s authoritarian regime. Ali was one of many who took to the streets in 2012 to protest spending around the country’s hosting of the Eurovision song contest. Detained and tortured for his role in the protests, he went into exile after his life was threatened. Ali has persisted in challenging the government by releasing music critical of the country’s dynastic leadership. Following the release of one song, Ali’s mother was arrested in a senseless display of aggression. In provoking such a harsh response with a single action, Ali has highlighted the repressive nature of the regime and its ruthless desire to silence all dissent.

Playwright and activist Silvanos Mudzvova uses performance to protest against the repressive regime of recently toppled President Robert Mugabe and to agitate for greater democracy and rights for his country’s LGBT community. Mudzvova specialises in performing so-called “hit-and-run” actions in public places to grab the attention of politicians and defy censorship laws, which forbid public performances without police clearance. His activism has seen him be traumatically abducted: taken at gunpoint from his home he was viciously tortured with electric shocks. Nonetheless, Mudzvova has resolved to finish what he’s started and has been vociferous about the recent political change in Zimbabwe.

The Museum of Dissidence, Cuba

The Museum of Dissidence is a public art project and website celebrating dissent in Cuba. Set up in 2016 by acclaimed artist Luis Manuel Otero Alcántara and curator Yanelys Nuñez Leyva, their aim is to reclaim the word “dissident” and give it a positive meaning in Cuba. The museum organises radical public art projects and installations, concentrated in the poorer districts of Havana. Their fearlessness in opening dialogues and inhabiting public space has led to fierce repercussions: Nuñez was sacked from her job and Otero arrested and threatened with prison for being a “counter-revolutionary.” Despite this, they persist in challenging Cuba’s restrictions on expression.

Abbad Yahya is a Palestinian author whose novel, Crime in Ramallah, was banned by the Palestinian Authority in 2017. The book tackles taboo issues such as homosexuality, fanaticism and religious extremism. It provoked a rapid official response and all copies of the book were seized. The public prosecutor issued a summons for questioning against Yahya while the distributor of the novel was arrested and interrogated. Yahya also received threats and copies of the book were burned. Despite this, he has spent the last year raising awareness of freedom of expression and the lives of young people in the West Bank and Gaza, particularly in relation to their sexuality.

The Egyptian Commission for Rights and Freedoms is one of the few human rights organisations still operating in a country which has waged an orchestrated campaign against independent civil society groups. Egypt is becoming increasingly hostile to dissent, but ECRF continues to provide advocacy, legal support and campaign coordination, drawing attention to the many ongoing human rights abuses under the autocratic rule of President Abdel Fattah-el-Sisi. Their work has seen them subject to state harassment, their headquarters have been raided and staff members arrested. ECRF are committed to carrying on with their work regardless of the challenges.

The National Gay and Lesbian Human Rights Commission is the only organisation in Kenya challenging and preventing LGBTI discrimination through the country’s courts. Even though homosexuality isn’t illegal in Kenya, homosexual acts are. Homophobia is commonplace and men who have sex with men can be punished by up to 14 years in prison, and while no specific laws relate to women, former Prime Minister Raila Odinga has said lesbians should also be imprisoned. NGLHRC has had an impact by successfully lobbying MPs to scrap a proposed anti-homosexuality bill and winning agreement from the Kenya Medical Association to stop forced anal examination of clients.

The women behind Open Stadiums risk their lives to assert a woman’s right to attend public sporting events in Iran. The campaign challenges the country’s political and religious regime, and engages women in an issue many human rights activists have previously thought unimportant. Iranian women face many restrictions on using public space. Open Stadiums has generated broad support for their cause in and out of the country. As a result, MPs and people in power are beginning to talk about women’s rights to attend sporting events in a way that would have been taboo before.

Team 29 is an association of lawyers and journalists that defends those targeted by the state for exercising their right to freedom of speech in Russia. It is crucial work in a climate where hundreds of civil society organisations have been forced to close and where increasingly tight restrictions have been placed on public protest and political dissent since mass demonstrations rocked Russia in 2012. Team 29 conducts about 50 court cases annually, many involving accusations of high treason. Aside from litigation, they offer legal guides for activists and advice on what to do when summoned by state security for interrogation.

Fereshteh Forough is the founder and executive director of Code to Inspire, a coding school for girls in Afghanistan. Founded in 2015, this innovative project helps women and girls learn computer programming with the aim of tapping into commercial opportunities online and fostering economic independence in a country that remains a highly patriarchal and conservative society. Forough believes that with programming skills, an internet connection and using bitcoin for currency, Afghan women can not only create wealth but challenge gender roles and gain independence.

Launched in 2016, Habari RDC is a collective of more than 100 young Congolese bloggers and web activists, who use Facebook, Twitter and YouTube to give voice to the opinions of young people from all over the Democratic Republic of Congo. Their site posts stories and cartoons about politics, but it also covers football, the arts and subjects such as domestic violence, child exploitation, the female orgasm and sexual harassment at work. Habari RDC offers a distinctive collection of funny, angry and modern Congolese voices, who are demanding to be heard.

Mèdia.cat is a Catalan website devoted to highlighting media freedom violations and investigating under-reported stories. Unique in Spain, it was a particularly significant player in 2017 when the disputed independence referendum brought issues of censorship and the impartiality of news under the spotlight. The website provides an online platform that systematically catalogues censorship perpetrated in the region. Its map on censorship offers a way for journalists to report on abuses they have personally suffered.

Avispa Midia is an independent online magazine that prides itself on its use of multimedia techniques to bring alive the political, economic and social worlds of Mexico and Latin America. It specialises in investigations into organised crime and the paramilitaries behind mining mega-projects, hydroelectric dams and the wind and oil industry. Many of Avispa’s reports in the last 12 months have been focused on Mexico and Central America, where the media group has helped indigenous and marginalised communities report on their own stories through audio and video training.

Wendy Funes is an investigative journalist from Honduras who regularly risks her life for her right to report on what is happening in the country, an extremely harsh environment for reporters. Two journalists were murdered in 2017 and her father and friends are among those who have met violent deaths in the country – killings for which no one has ever been brought to justice. Funes meets these challenges with creativity and determination. For one article she had her own death certificate issued to highlight corruption. Funes also writes about violence against women, a huge problem in Honduras where one woman is killed every 16 hours.

MuckRock is a non-profit news site used by journalists, activists and members of the public to request and share US government documents in pursuit of more transparency. MuckRock has shed light on government surveillance, censorship and police militarisation among other issues.  MuckRock produces its own reporting, and helps others learn more about requesting information. Last year the site produced a Freedom of Information Act 4 Kidz lesson plan to help educators to start discussions about government transparency. Since then, they have expanded their reach to Canada. The organisation hopes to continue increasing their impact by putting transparency tools in the hands of journalists, researchers and ordinary citizens.

Novosti is a weekly Serbian-language magazine in Croatia. Although fully funded as a Serb minority publication by the Serbian National Council, it deals with a whole range of topics, not only those directly related to the minority status of Croatian Serbs. In the past year, the outlet’s journalists have faced attacks and death threats mainly from the ultra-conservative far-right. For its reporting, the staff of Novosti have been met with protest under the windows of the magazine’s offices shouting fascist slogans and anti-Serbian insults, and told they would end up killed like Charlie Hebdo journalists. Despite the pressure, the weekly persists in writing the truth and defending freedom of expression.